The first thoughts about Zanzibar are fantastic, white sandy beaches, crystal blue water and, spices.
But Zanzibar is much more than that. It is a unique, tropical paradise in the Indian Ocean.

“Jambo”, or “Hello”, and “Hakuna Matata” which means “no problem” are the first and the most used words which you will hear on the island. And when you arrive there, very soon, you will be using these words, too!

Our Zanzibar’s adventure took place in June 2018, with the Globe tracker association.
And we plan to go back there again because… Zanzibar is such a fantastic place, different from any other place in the world! 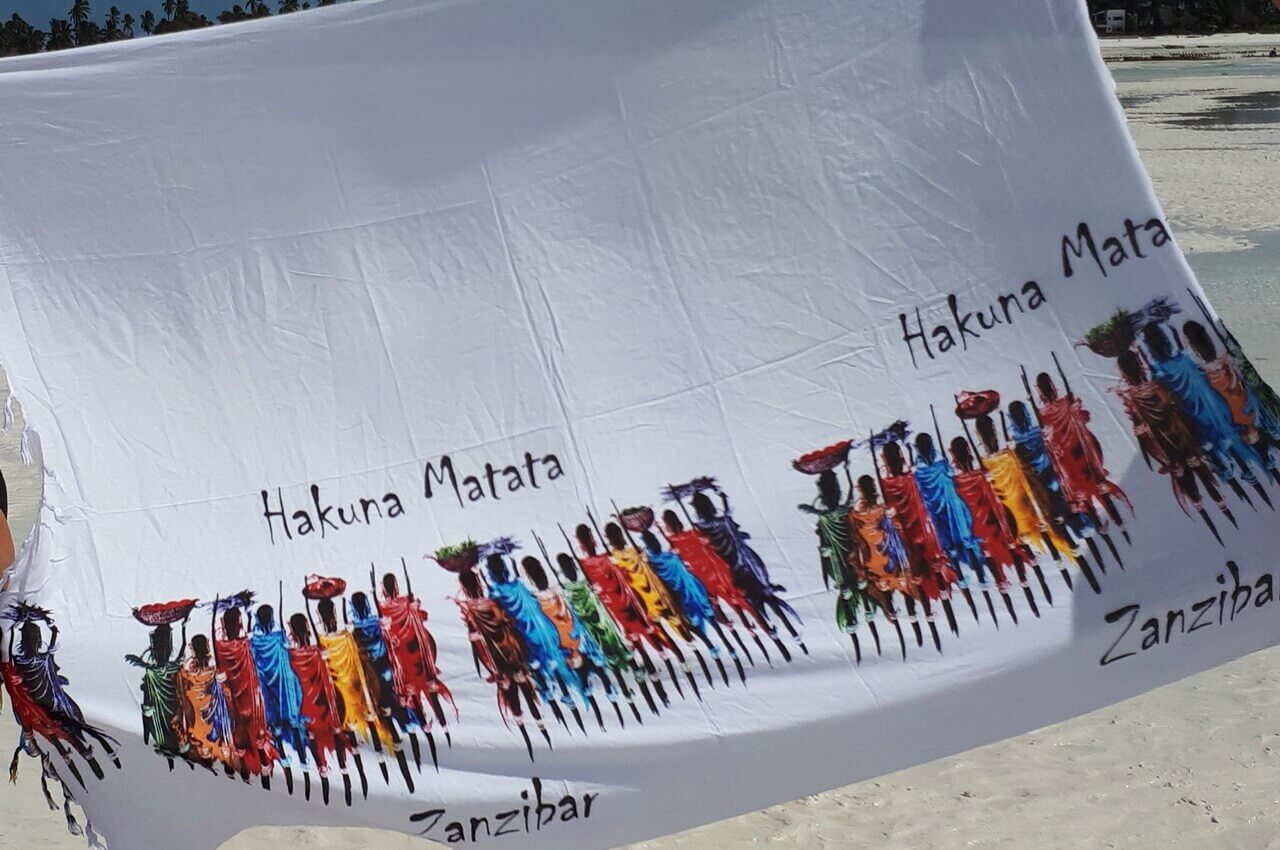 How to get to Zanzibar?

Zanzibar is a semi-autonomous part of Tanzania in East Africa, about 6 degrees south of the Equator, in the Indian Ocean.
It is composed of the Zanzibar Archipelago, about 25–50 km (15-30 mi) off the coast of the mainland. It consists of many small islands and two large ones: Unguja, the main island, commonly known as Zanzibar, and Pemba.

Zanzibar can be reached by plane and by sea.
The main airport (Abeid Amani Karume International Airport, ZNZ code) is located in Unguja island. It has flight connections with Mainland Tanzania, Kenya, Oman, Qatar, United Arab Emirates. There are seasonal charters with Europe and the Middle East as well.

The Azam Marine’s ferry is the fastest ferry service between Dar Es Sallam, Mainland Tanzania to Zanzibar’s port in Stone Town. The ferries operate daily, and the ferry trip takes about two hours. The trip price per person is 35$ for economy class, and 50$ for VIP. 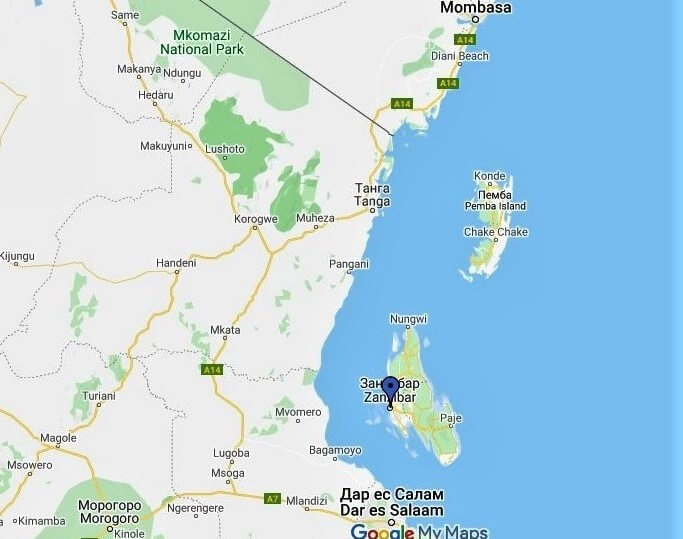 The best time to visit Zanzibar

Zanzibar lies below the equator and has a pleasant tropical climate.
The sunrise is about 6.00-6.30h, and the sunset is about 18-19h, depends on the months.

Humidity is high throughout the year. But a sea breeze provides freshness and a more pleasant feeling.
The sea is always warm for swimming. The water temperature ranges from 25 °C in August, to 29 °C from December to April.

There are two rainy and two dry periods.
The best time to visit is during the dry seasons: December to February and June to October. Summer temperatures range from 20°C to 30°C. Sometimes there are showers, but they are short and cooling. The hottest months are from December to March, often above 30°C.

The main rainy season is from March to May. Rains can be heavy, but not constant, humidity is very high. Most hotels are closed and it could be difficult to travel around.
The second, shorter rainy season with lighter rains is in November and December.

Swahili is the official language of Zanzibar. Almost the entire population also speaks English because it is the second language taught in school.

Most of the people are Muslims, about 98%. Tourists who are non-Muslim are not allowed to enter any mosque in  Zanzibar.
So, you need to take care of religious holidays as well as clothing. This is especially important for women when they go sightseeing and visiting cultural and religious sites. The bath costume and beachwear are acceptable for the beach. But you have to be dressed properly if you walk around as well. Ladies, forget topless sun-tanning, it is not allowed!

If you like to photograph the local people, first ask for their permission.

The best beaches in Zanzibar

Are you familiar with these fantastic photos of long, white sandy beaches, crystal green-blue water, and coconut palms trees?
Well, all the beaches in Zanzibar are exactly like this. But each of them has something special, different from the others!

There is something very interesting about Zanzibar‘s beaches: low tide and high tide.
One moment, you walk along the bottom of the ocean. And in a few hours, the bottom is 3 to 4 meters under the water surface. It is an unbelievable natural phenomenon! 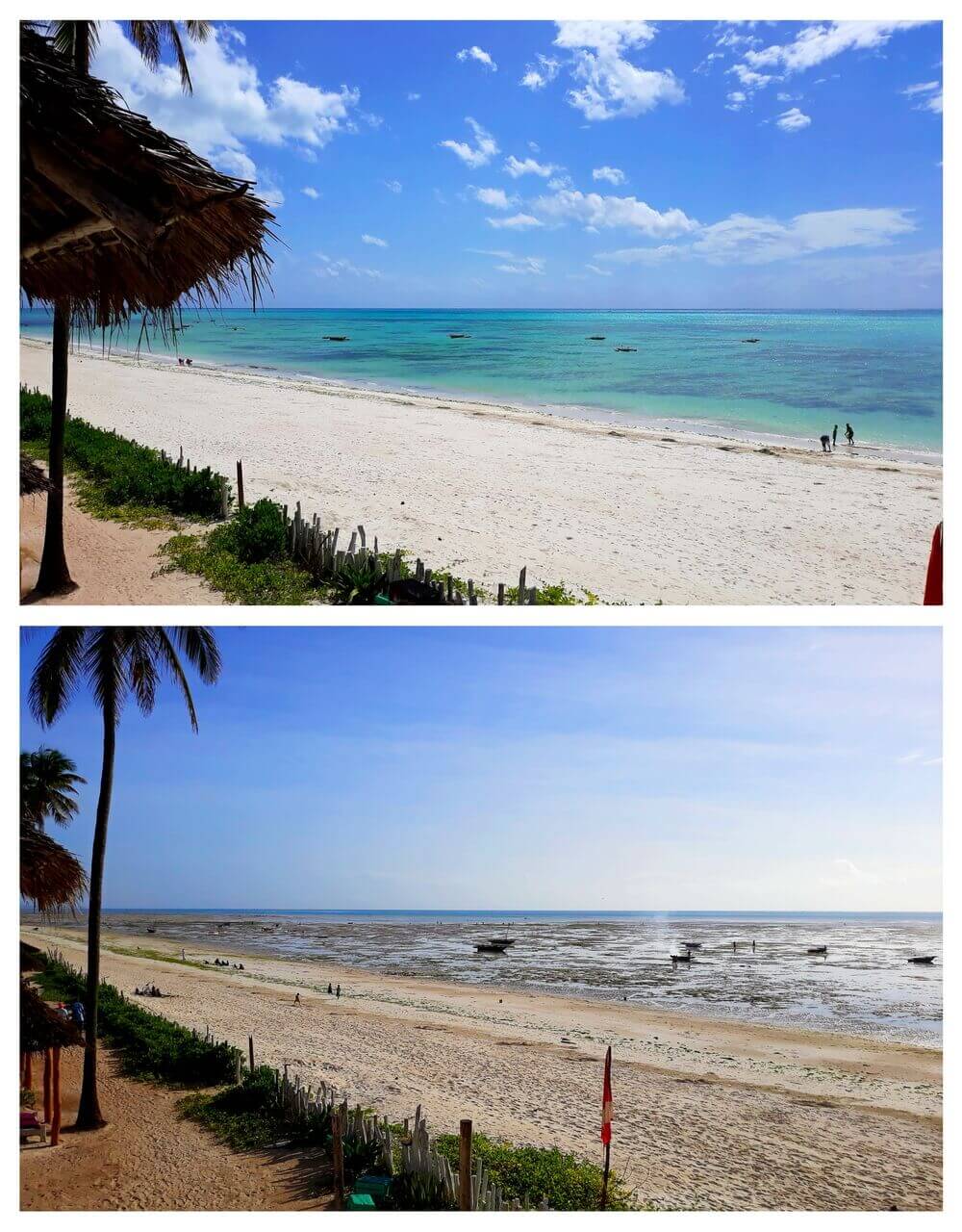 Jambiani beach, a high tide and a low tide

The most famous beaches on the north/northwest are Nungwi and Kendwa. 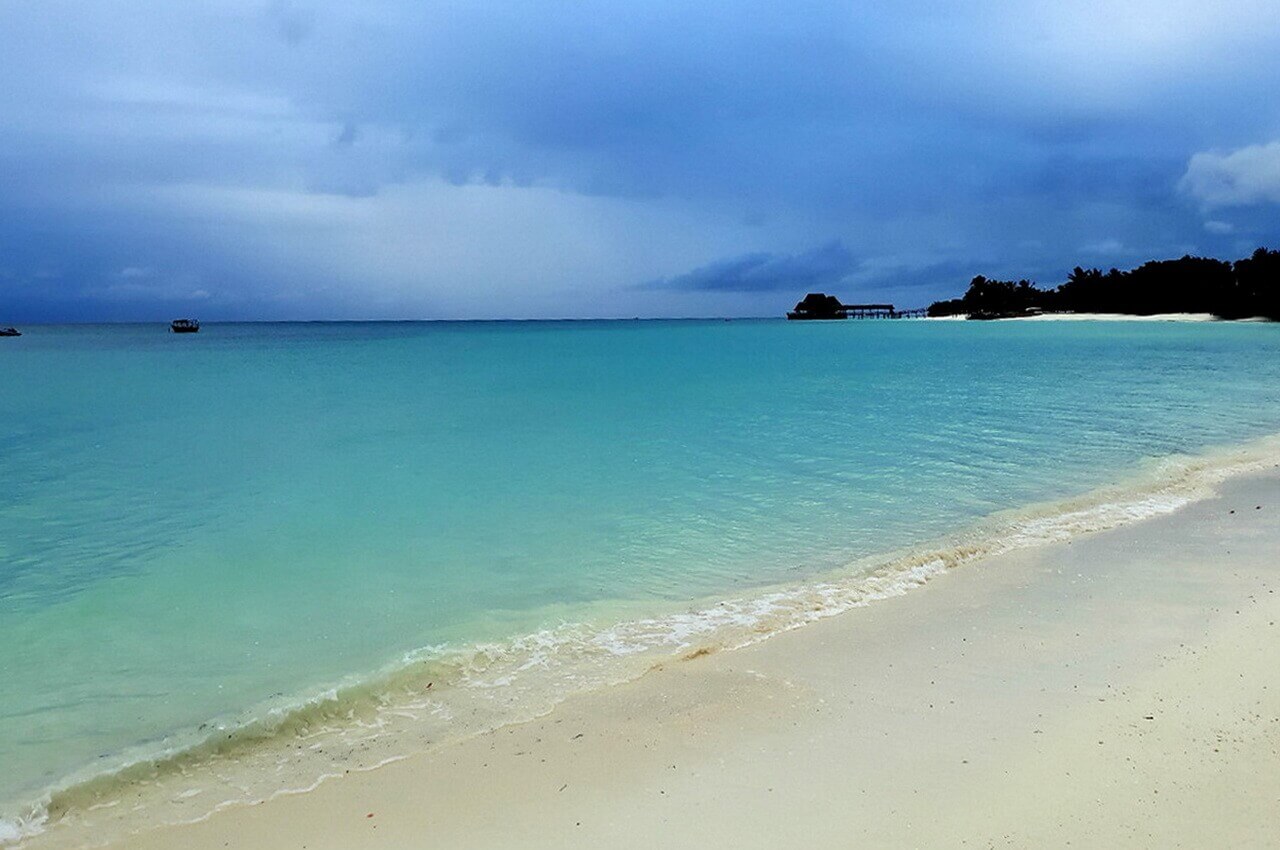 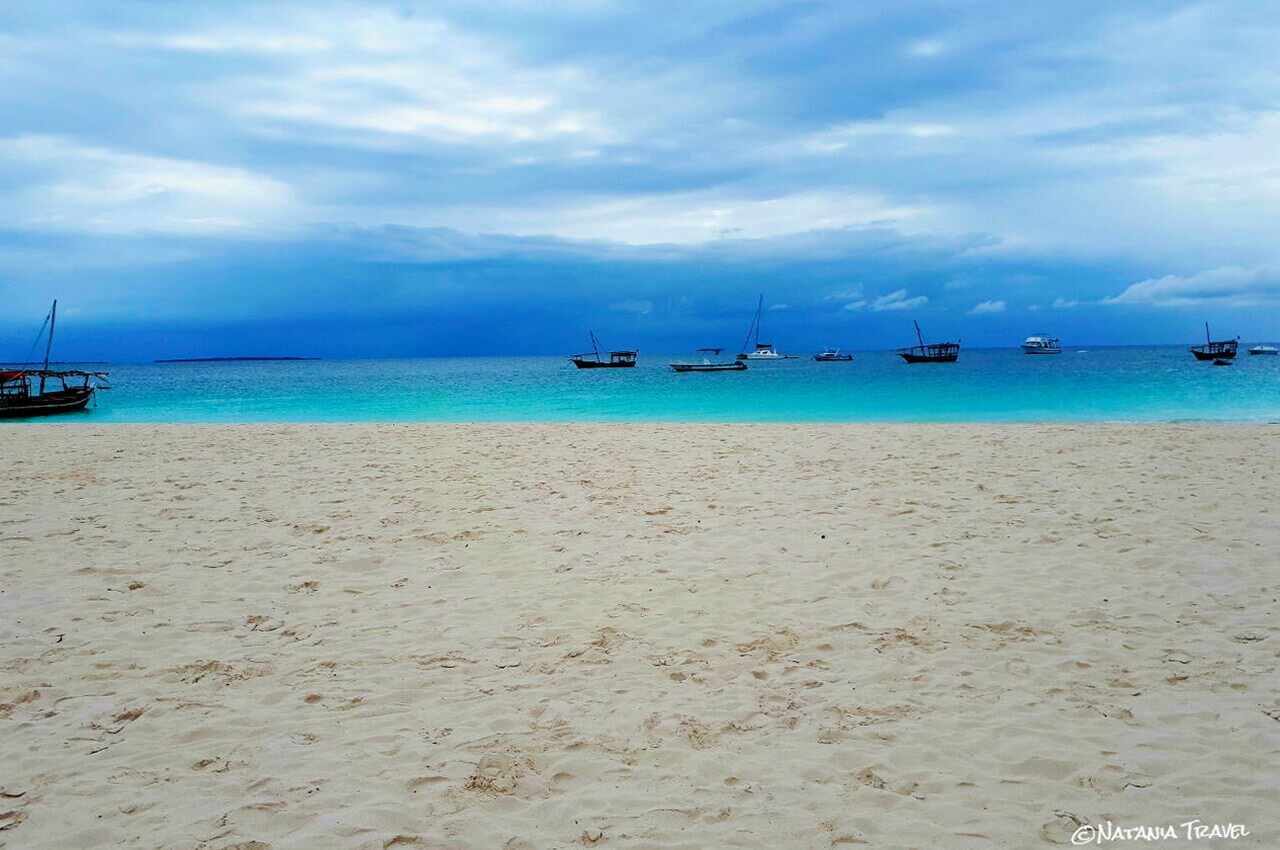 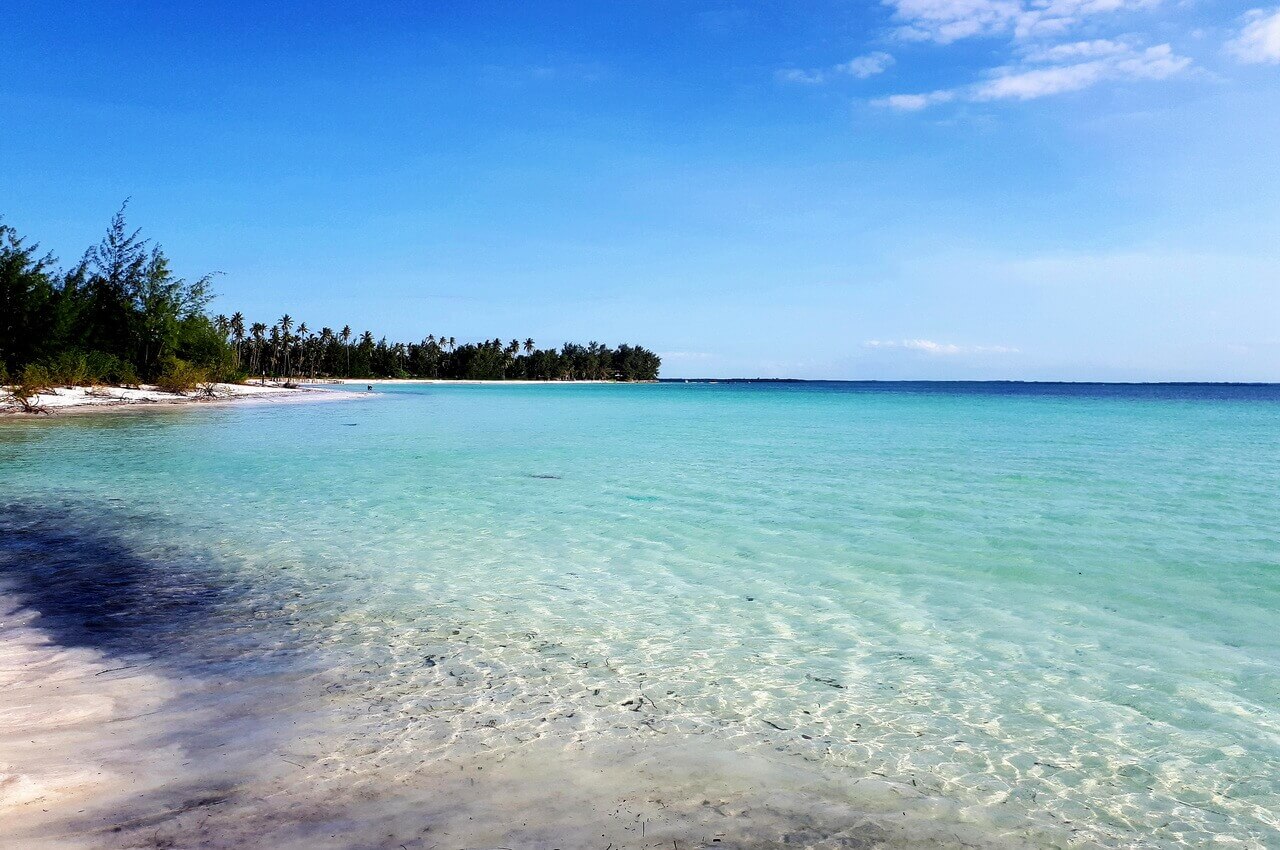 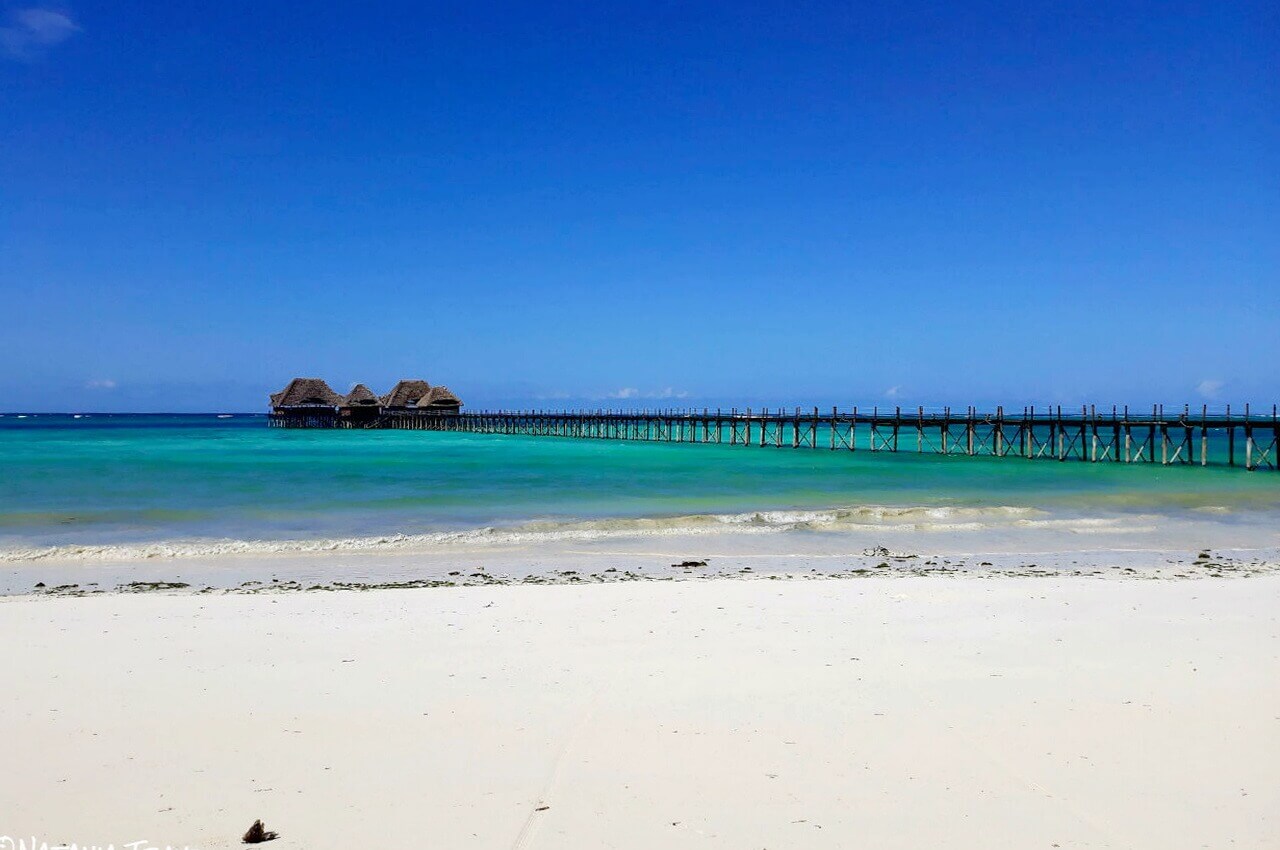 Paje beach and Jambiani beach are located on the southeast of Zanzibar, in the villages with the same name. 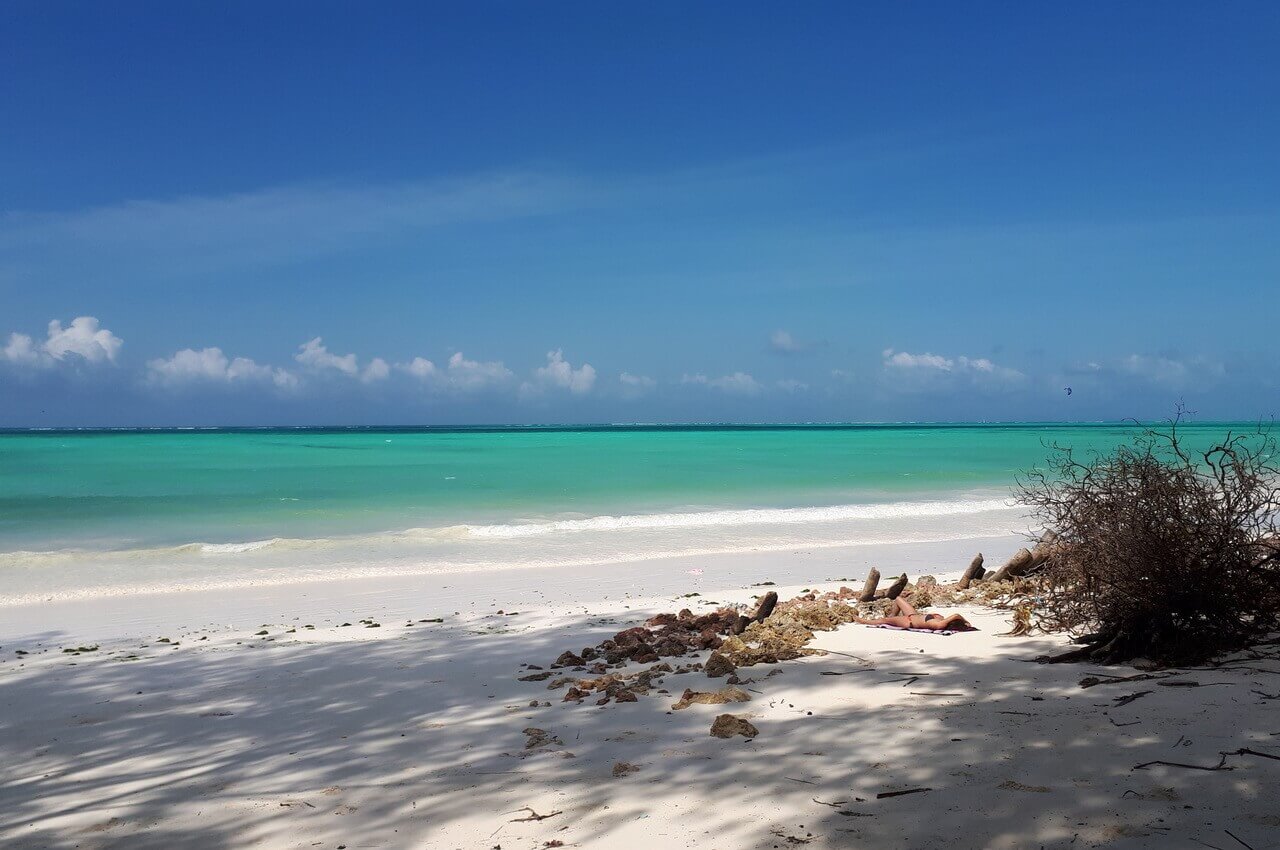 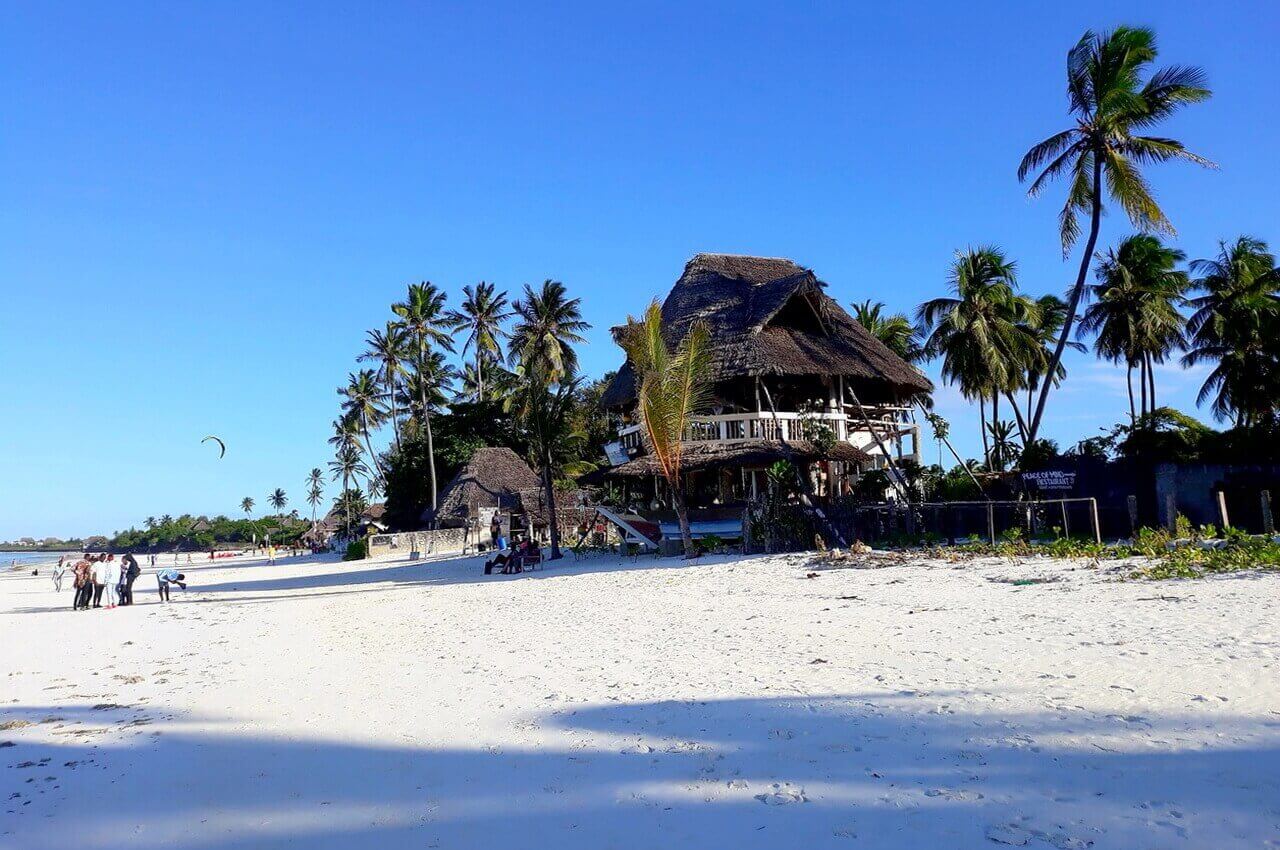 Kizimkazi beach is located on the southern part of the island. 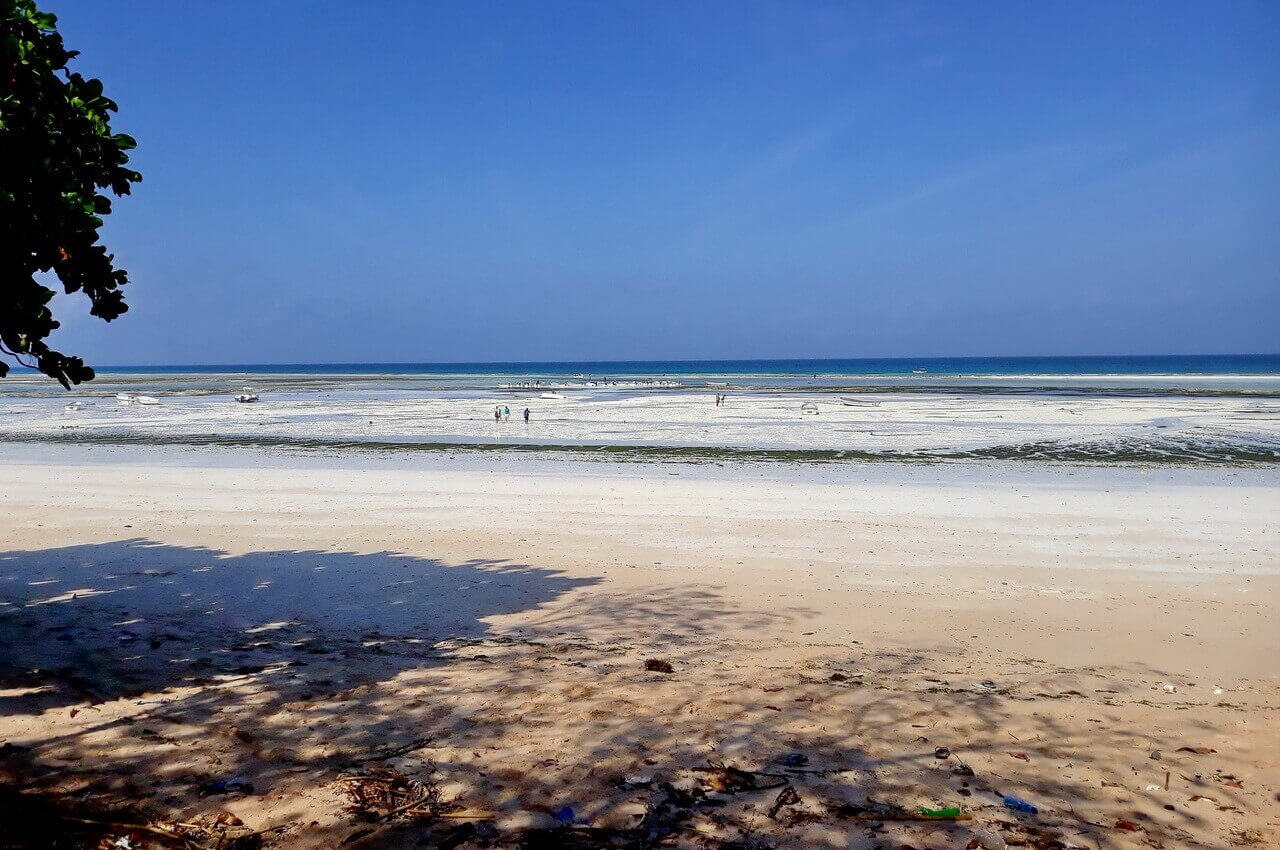 More about these fantastic beaches you can find here.

Things to do and see on Zanzibar’s island

There are a lot of things to do and see on Zanzibar Island, depending on your interests. You can enjoy amazing white sandy beaches, swimming, snorkelling, scuba diving, kitesurfing, windsurfing, deep-sea fishing or blue safari. 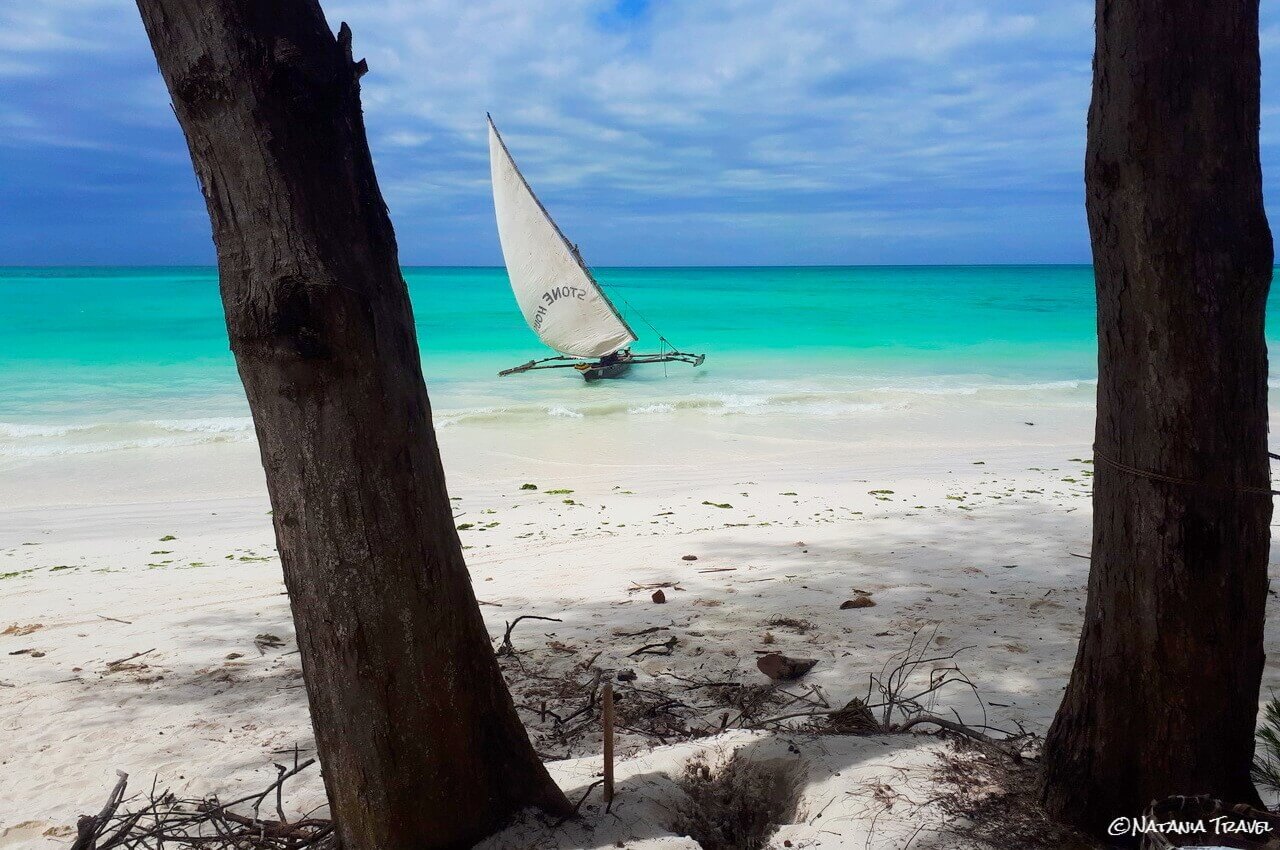 See how the seaweed is growing in the seawater. 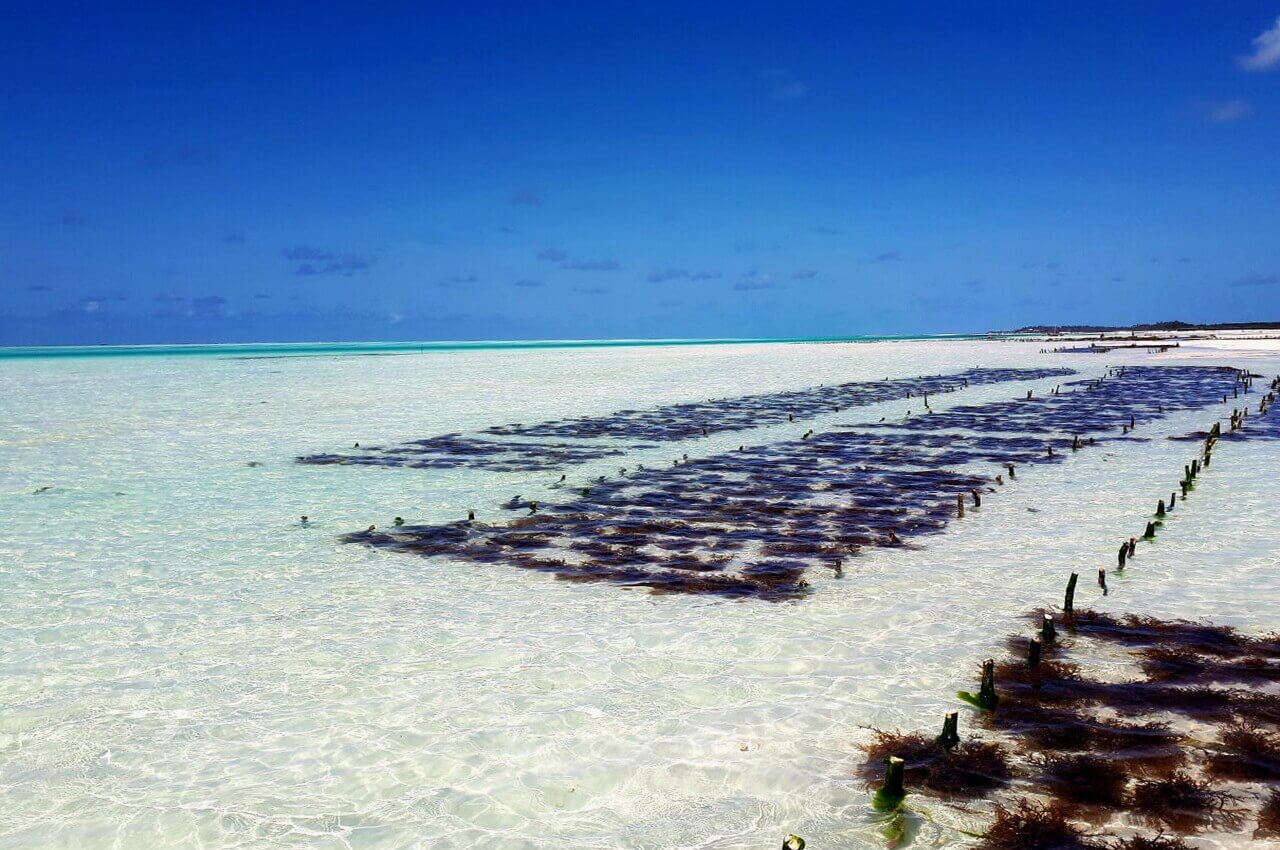 Seaweed farm in the ocean, Jambiani

Feel a sand dune under your feet in the middle of the ocean. 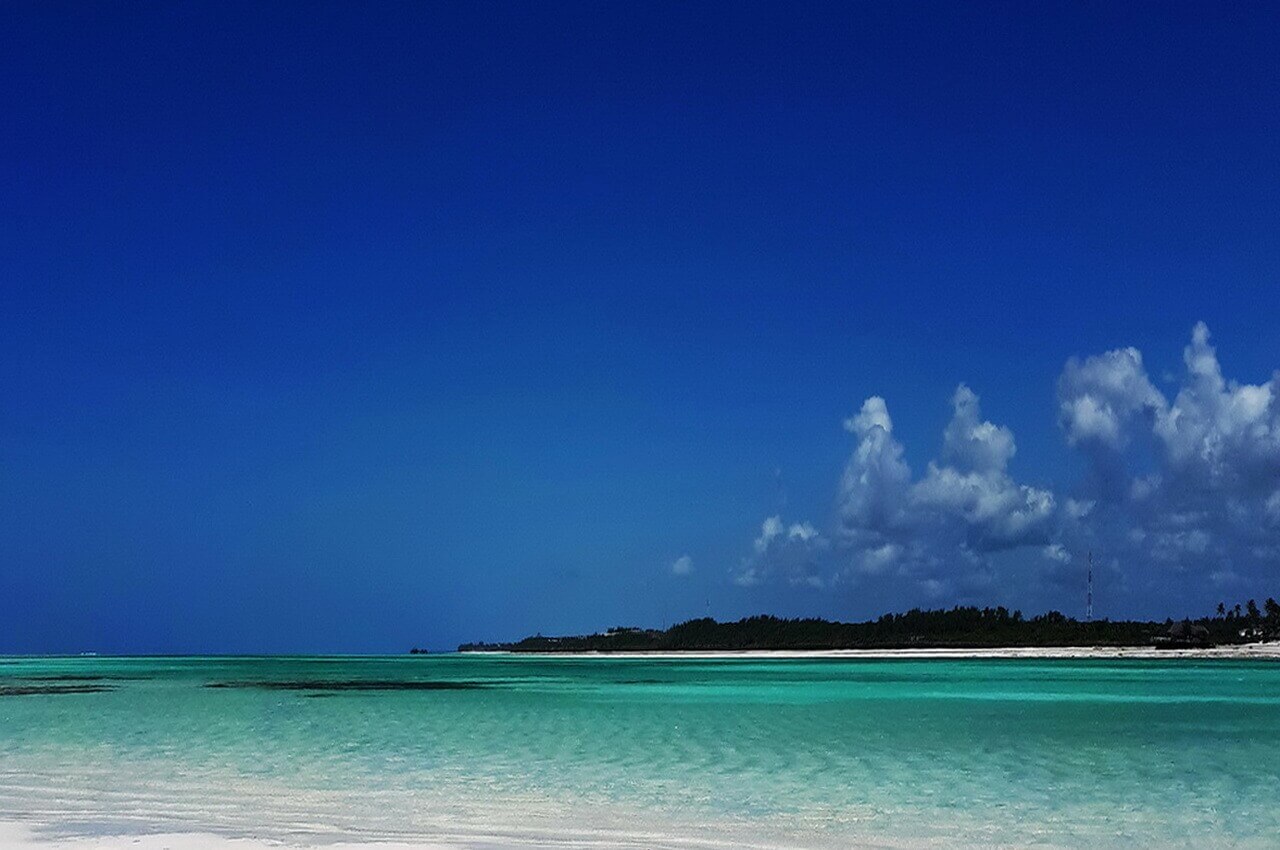 Sand dune in the Indian Ocean

Visit Prison Island and hang out with a giant, old Aldabra tortoises, brought from Seychelles. 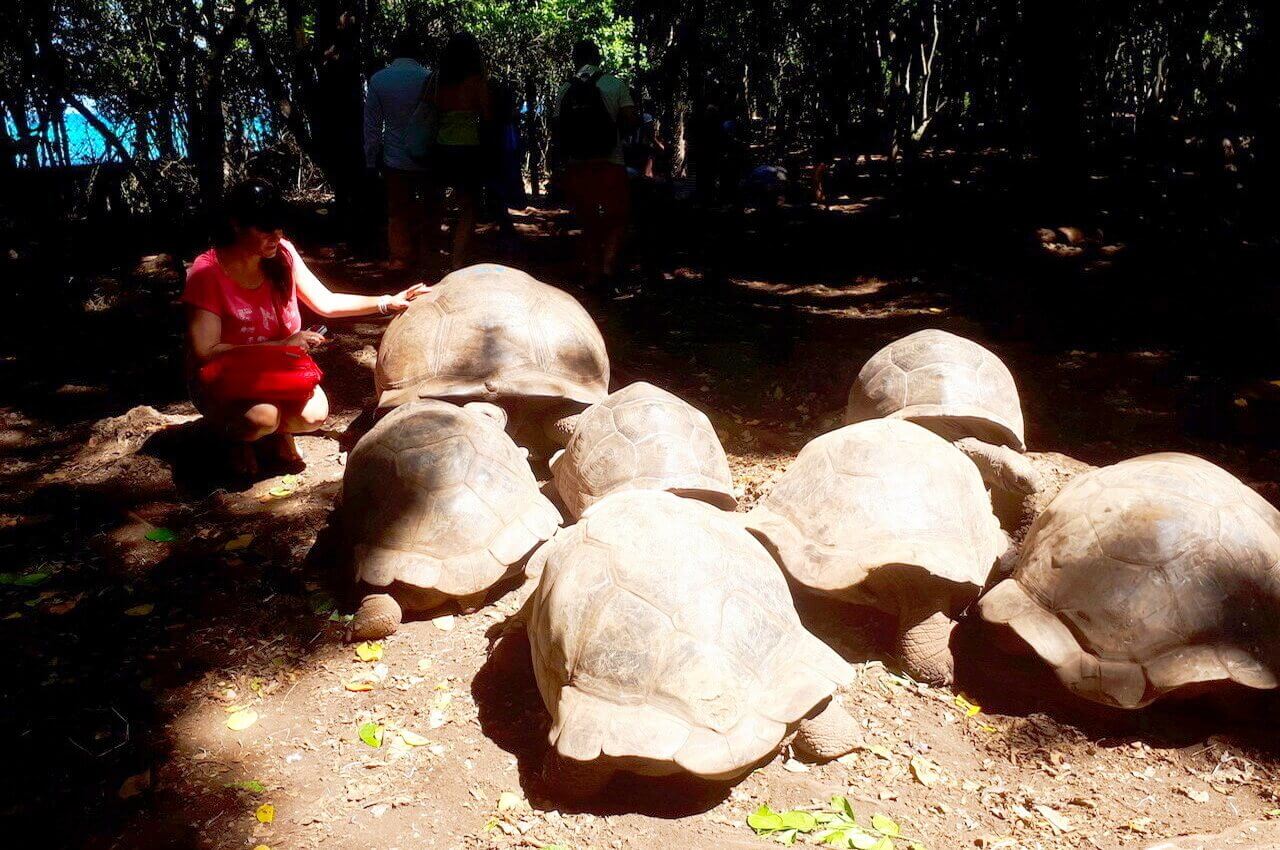 Take a walk through the picturesque fishing villages. See how the local inhabitants live, and where the children go to school.
Take a ride in dala-dala with locals. It is an open mini-bus-taxi, the only public transportation on the island.

See how the spices are grown on the spice plantations and try delicious tropical fruits.
You can read more about spices, herbs, and fruits here. 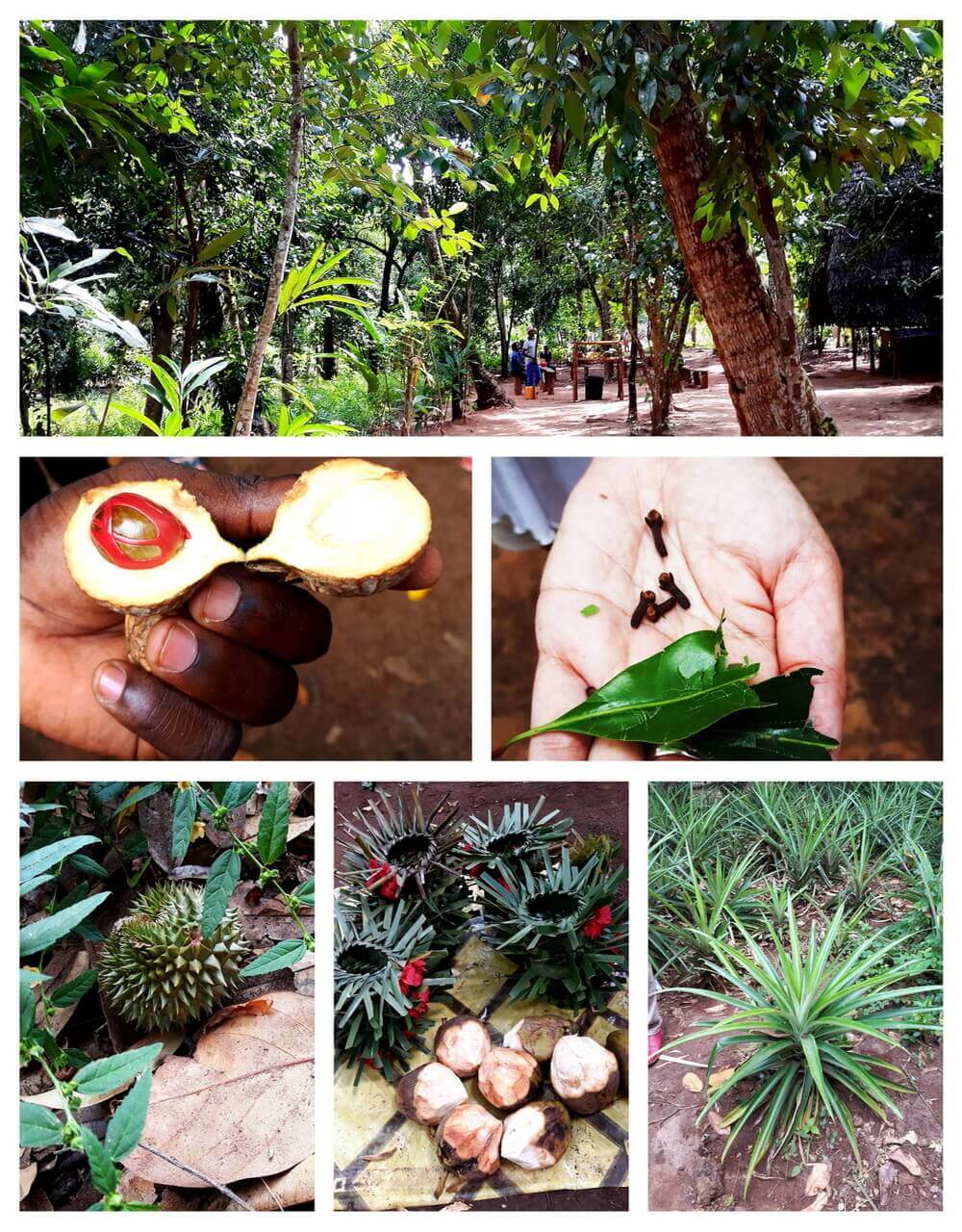 Spices and fruits on the spice farm

Taste fresh seafood, and ”catch of the day fish” with rice and spices, in the restaurant on the beach,
and with your feet in the sand. 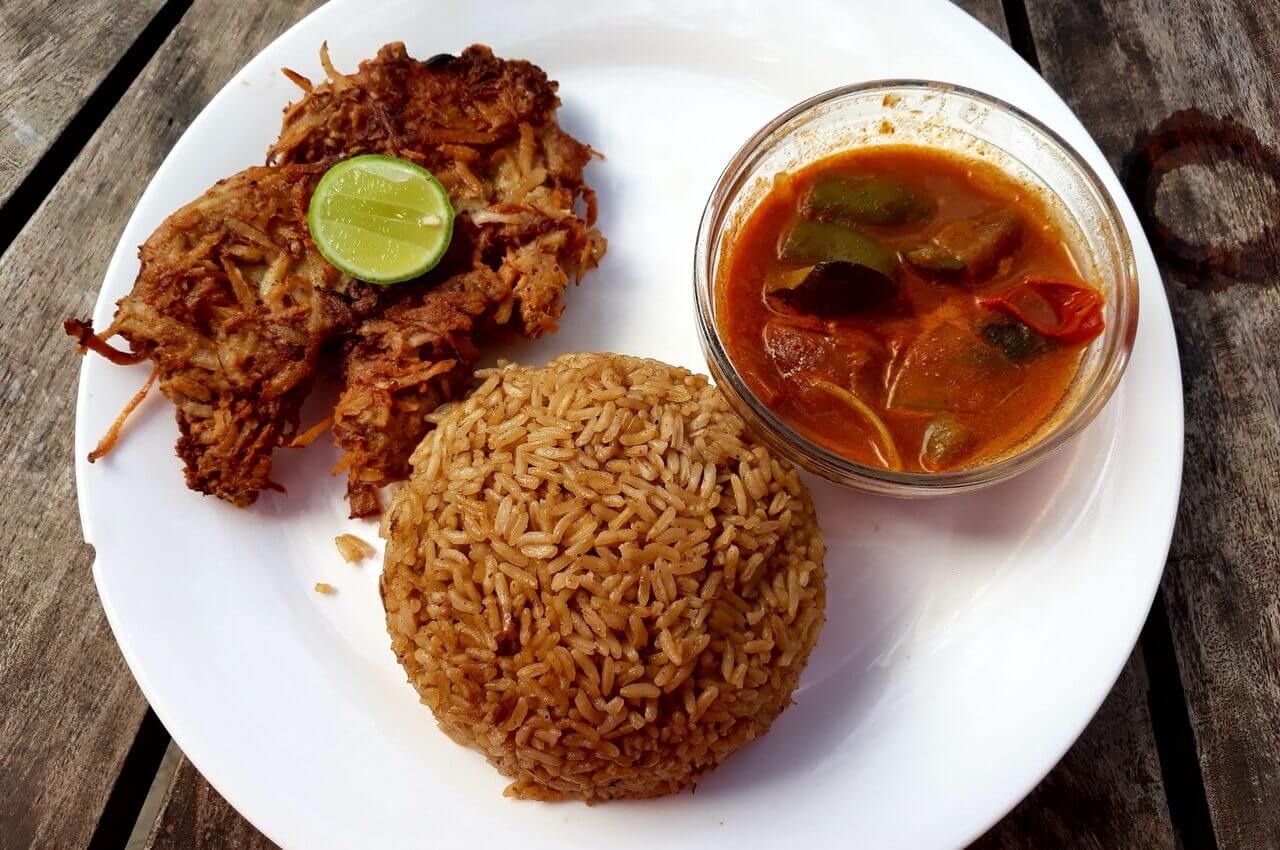 Have lunch in the famous ”The Rock restaurant”, located on the rock in the ocean. 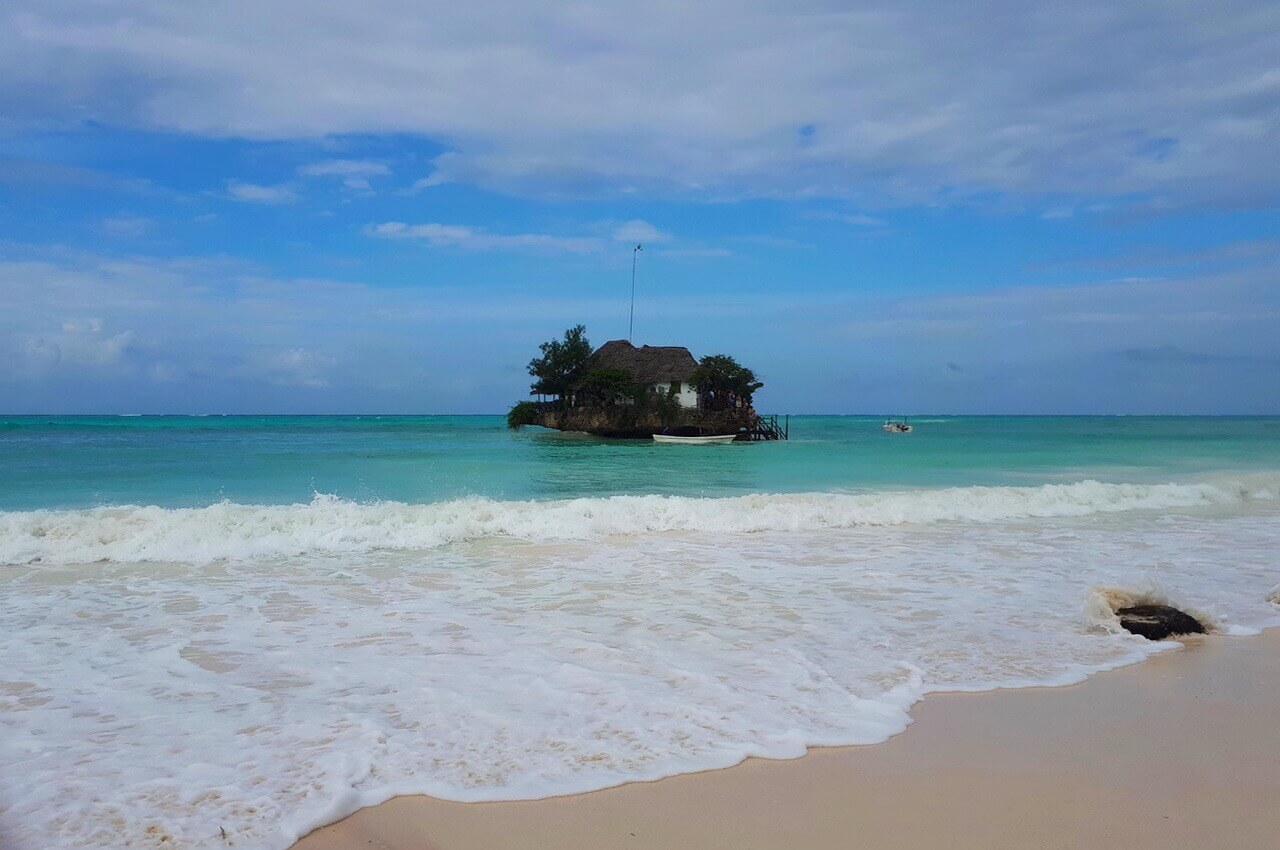 Take a walk through the Jozani forest reserve where the endemic red Colobus monkeys live.
See what the mangrove trees look like. 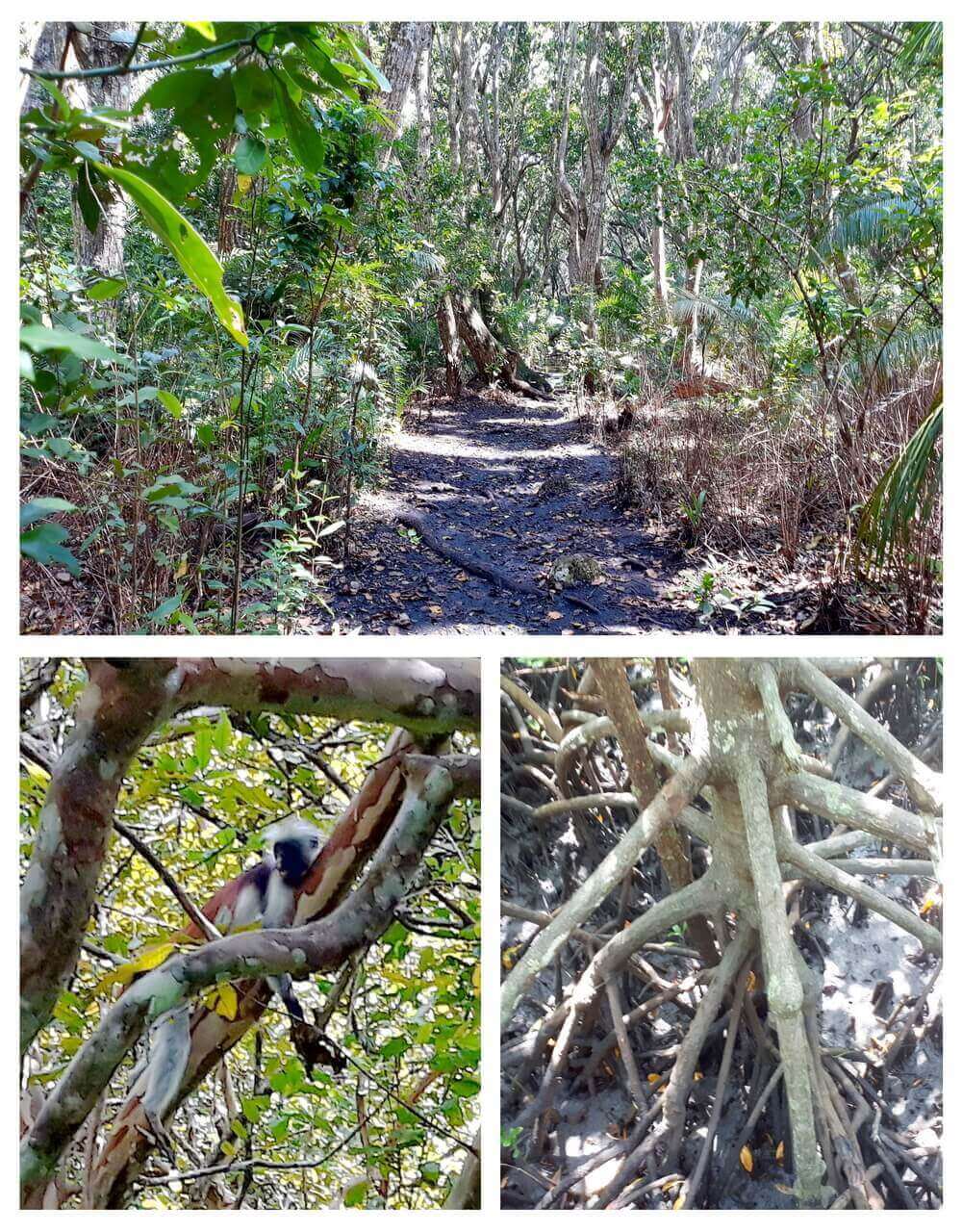 Wait for the fantastic sunset on the beach. 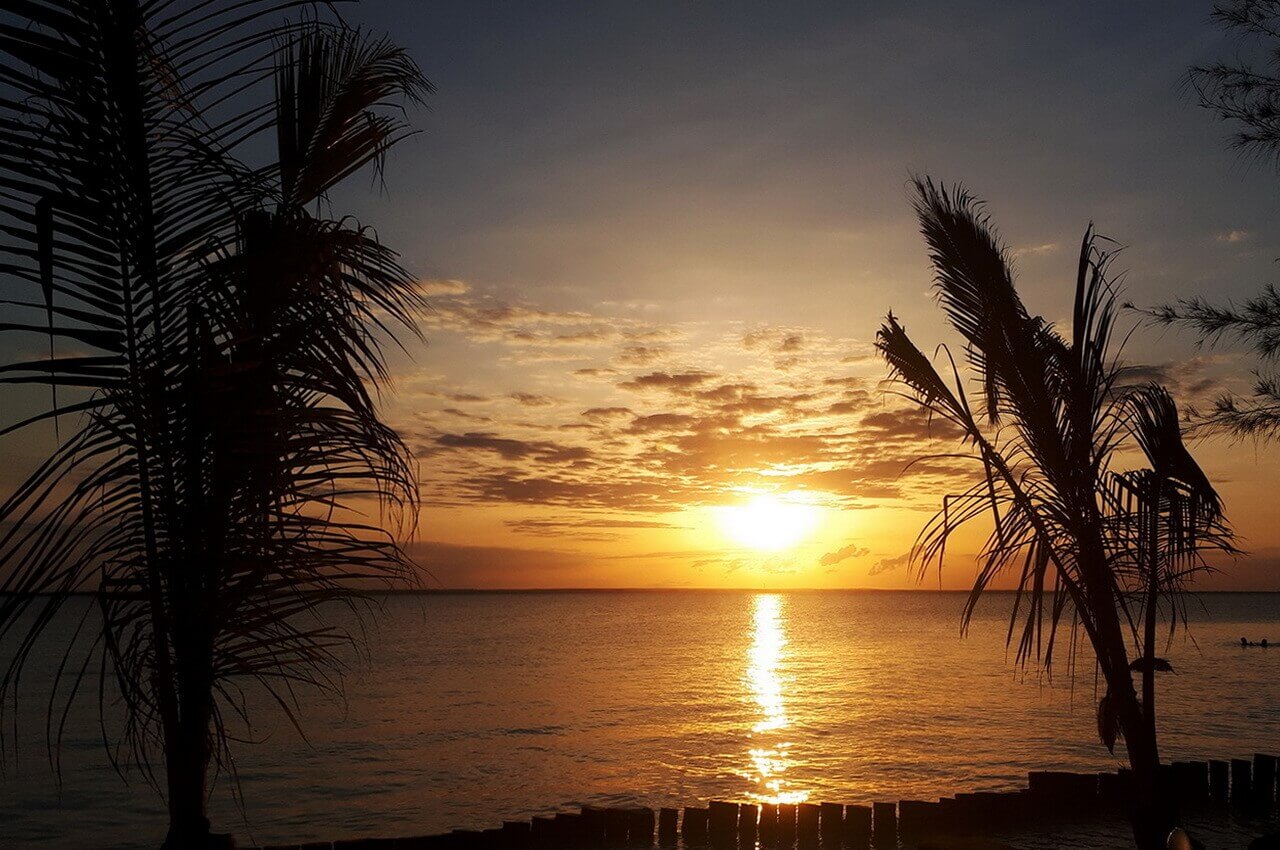 And ENJOY every day.
Because when you come back home, you will miss all these amazing moments.

The main economic activities of the local people are fishing and agriculture.

Zanzibar is known as the land of spices. Once it was the world’s largest producer of cloves. Today the economy is based on the large income from the export of cloves, coconut products, spices, and seaweed.

Zanzibar has a lot of tourist potential, but it is still relatively untapped. Since the 1990s, more and more visitors are coming to Zanzibar every year, making tourism the primary foreign exchange earner. On the one hand, tourism development brings financial benefits.
But, on the other hand, there is a problem with environmental sustainability. For years beach sand was used for construction, leading to soil erosion problems. Mangrove poles are used in new buildings, which results in their reduction and acceleration of coastal erosion as well.

Then, there is a problem with freshwater supply, which is precious on low-lying islands. The water levels in wells and groundwater are low. And accommodation facilities use large amounts of water in order to provide their services.

There are concerns about overfishing as well. The growing number of restaurants requires a bigger supply of fish, crabs, lobsters, squids, and octopuses.

The National Environmental Policy for Zanzibar brought some environmental restrictions to preserve cultural and biological diversity. This is an issue of sustainability and responsible tourism. The visitors are expected to act responsibly towards Zanzibar’s environment and culture as well. It is necessary to preserve the uniqueness and magic and of Zanzibar’s island.

Zanzibar has been cut off from mainland Africa for many thousands of years.
Because of its specific position in the Indian Ocean, the history of Zanzibar was very turbulent and dark, as well.

The first inhabitants were the Bantu people from mainland of Africa, 3,000-4,000 years ago.

The next were the Persians, who came from the Middle East in the 10th century. They named the island Zangi-bar, which means “the land of the Black people” (Persian words Zangi = Black, Bar = the Place of). For a short time, they became absorbed into the local population, accepting the specific language Swahili and enriching it with words from their language. This new African-Persian population converted to Islam and adopted many Persian traditions.

While searching the route for India, the Portuguese came to the island at the beginning of the 16th century. Zanzibar was a part of Portugal’s empire for almost two centuries. They traded with spices but also initiated the slave market.

In the 17th century, the Omani Arabs expelled the Portuguese and established their control. During the late 18th and early 19th centuries, Zanzibar had a central role in trade routes and the slave trade in Africa.

Then, Zanzibar has proclaimed a British protectorate in 1890, which lasted for more than 70 years. After the Anglo-Zanzibar war (the shortest war in history), the slave trade was officially abolished.

The Zanzibar Revolution was in 1964. The Sultan and some Arab and Indian origin inhabitants were expelled from the island.
In the same year, Tanganyika and Zanzibar were united in the Republic of Tanzania.

Stone Town, the capital of Zanzibar

The capital is Zanzibar town, located in the west part of the island. It consists of the old, historic part named Stone Town and another, the new part, with houses, shops, offices, and apartment blocks.

Because of its specific architecture and culture, Stone Town was designated as a UNESCO World Heritage Site in 2000.
The city is an unusual mix of African, Persian, Arab, Indian, and European cultures. Stone Town got its name because of the houses built with local coral stone by Arab traders and slaves during the 19th century. 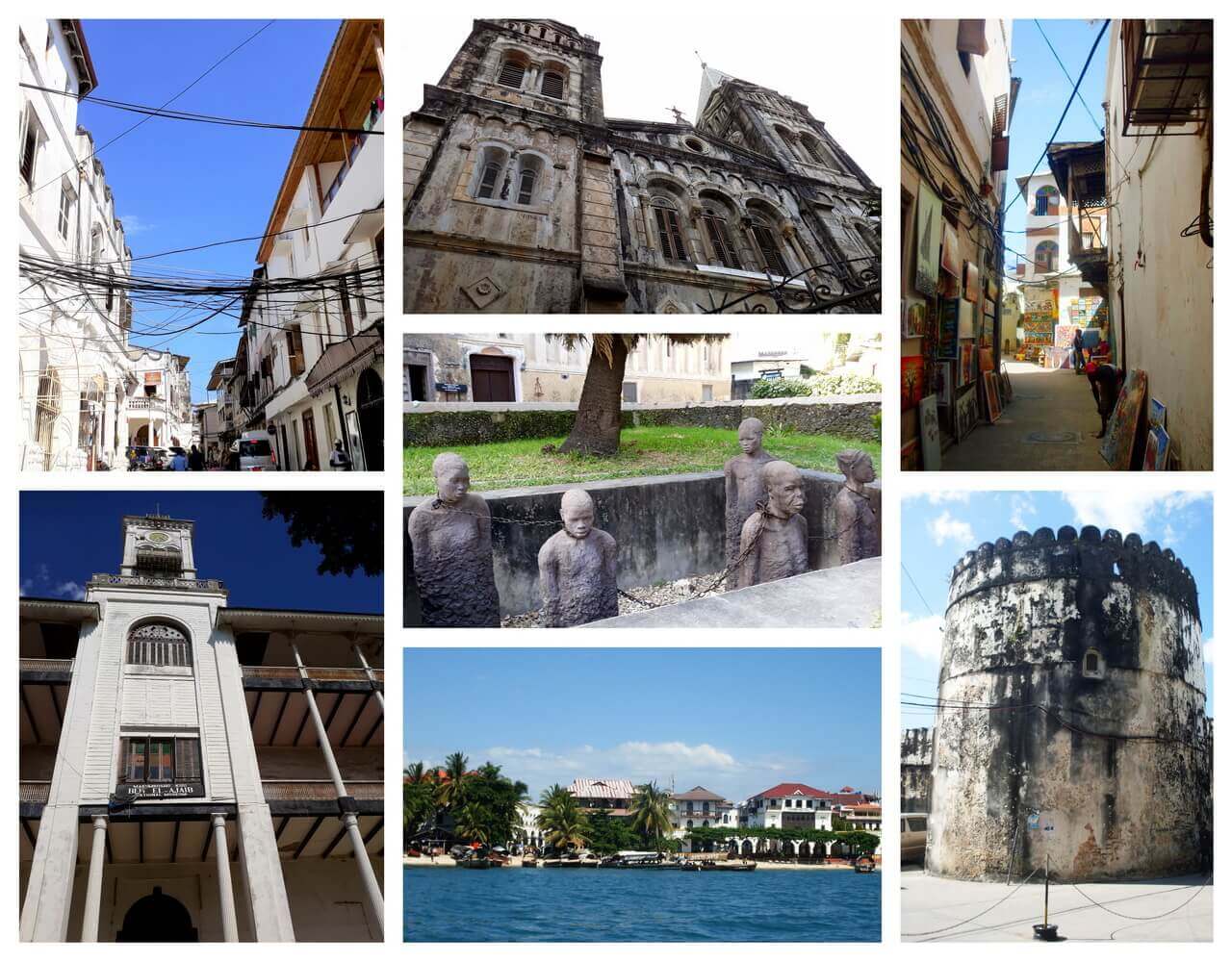 And when the sun goes down, taste the local food on the open-air market in Forodhani gardens on the waterfront. 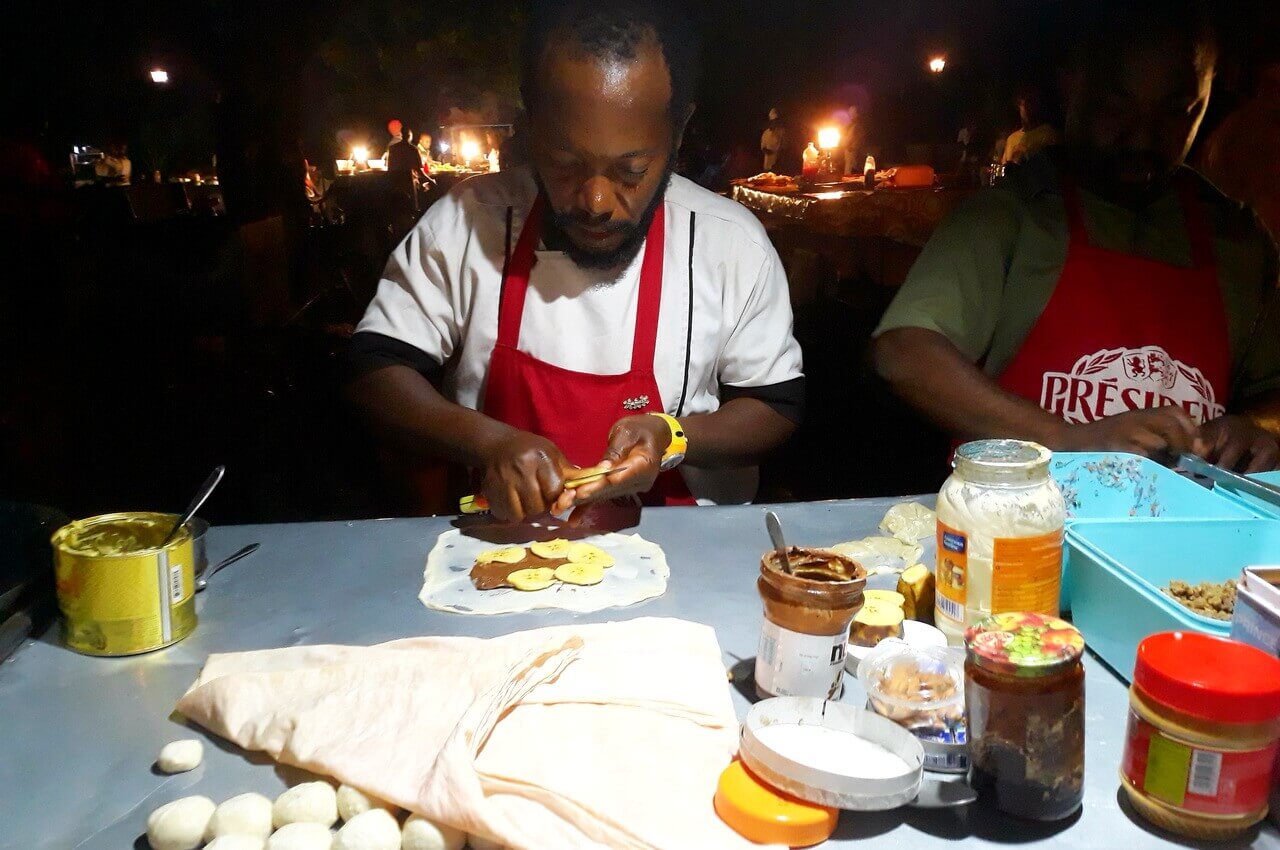 Zanzibar is famous for its specific and interesting doors as well.
Wooden carved doors are everywhere, made in Indian, Arab or Swahili styles. Every door is telling some special story about its owner’s social status, religion, and profession. 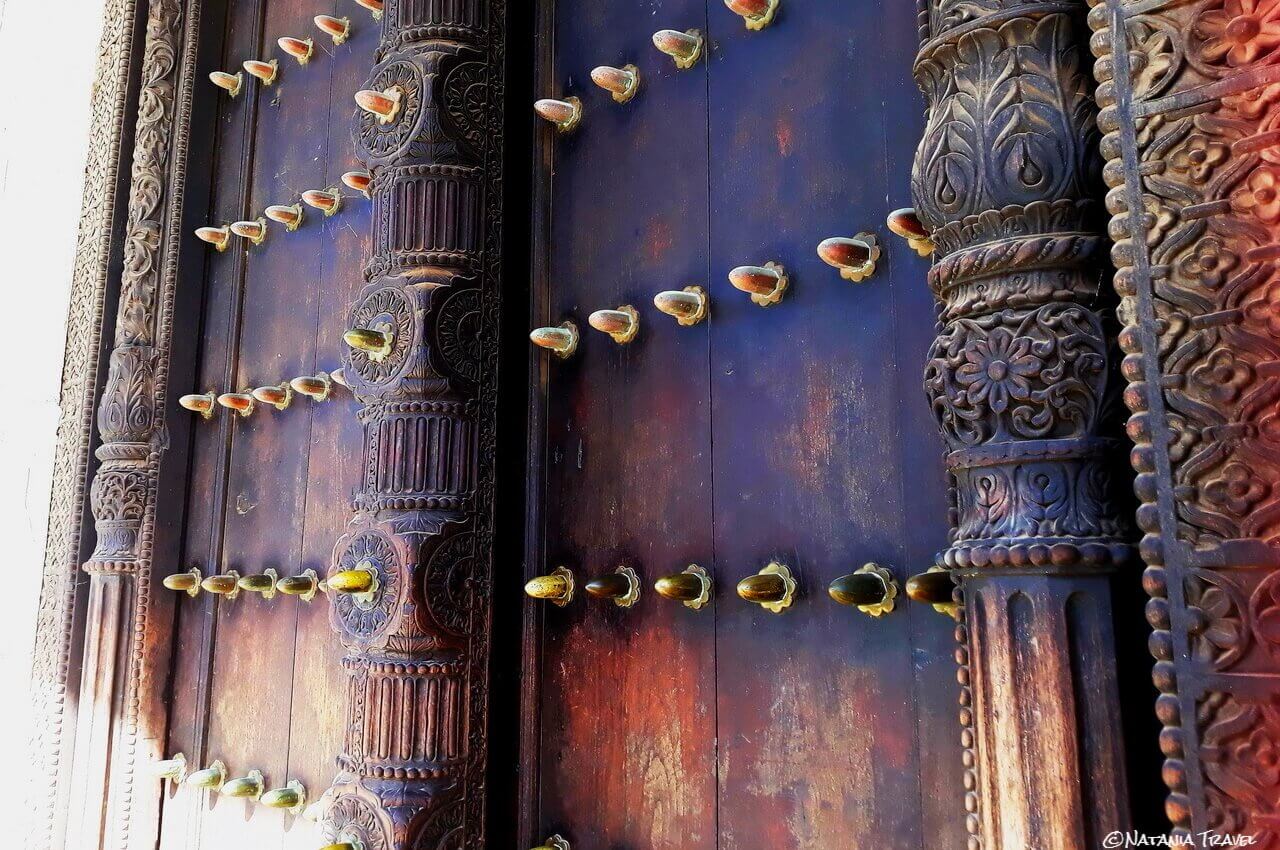 When you come to Zanzibar, you can’t be sure what to expect from your vacation.
Someone falls in love with Zanzibar immediately and dreams to come back again.
Someone remembers it as a cosy and relaxing vacation on the white, sandy beach and swimming in the warm, green-blue sea.

For me, “Zanzi” is more than a relax-destination. There are so many stories and details about it for only one post.
Or I can’t describe it in a shorter way.

So stay tuned if you like to hear more about the beautiful beaches, history, Stone Town and its attractions,
the slave market, spices, Jozani forest, and travel tips.

The next posts will take you to Zanzibar’s world, filled with stunning nature views, dark history, and aromatic spices. 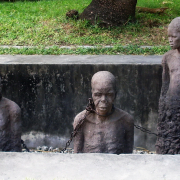