The Bahá’í Gardens are located in Haifa town on the Mediterranean shoreline. We visited this beautiful place during our trip to Israel.

Haifa is the third-largest city in Israel, after Jerusalem and Tel Aviv. Built on the slopes of Mount Carmel, the settlement has a history spanning more than 3,000 years.
If you have time, visit Haifa and enjoy its warm hospitality. There are many historic sites, museums, restaurants, coffee shops, and a very beautiful and long sandy beach as well.

There are other Bahá’í gardens in Acre city (local Akko), located in the coastal plain region of the northern district of Israel. And together they constitute the center of Bahá’í pilgrimage. More than half a million visitors every year visit these gardens and enjoy their beauty of colors and shapes.

In July 2008, the Bahá’í Gardens were inscribed on UNESCO’s World Heritage List, in recognition of their “outstanding universal value” as a holy place.

Probably you are wondering now: what and who Bahá’í are? I will explain to you soon.
And trust me… I didn’t know about them until I saw the gardens and heard a story from our guide Tanja Ben Haim Marcetic!

The Bahá’í Gardens are no ordinary gardens. It is the holiest site of the Bahá’í faith.
And today one of the most visited tourist attractions in Haifa and Israel as well.

From the top of the gardens, the view is absolutely stunning! 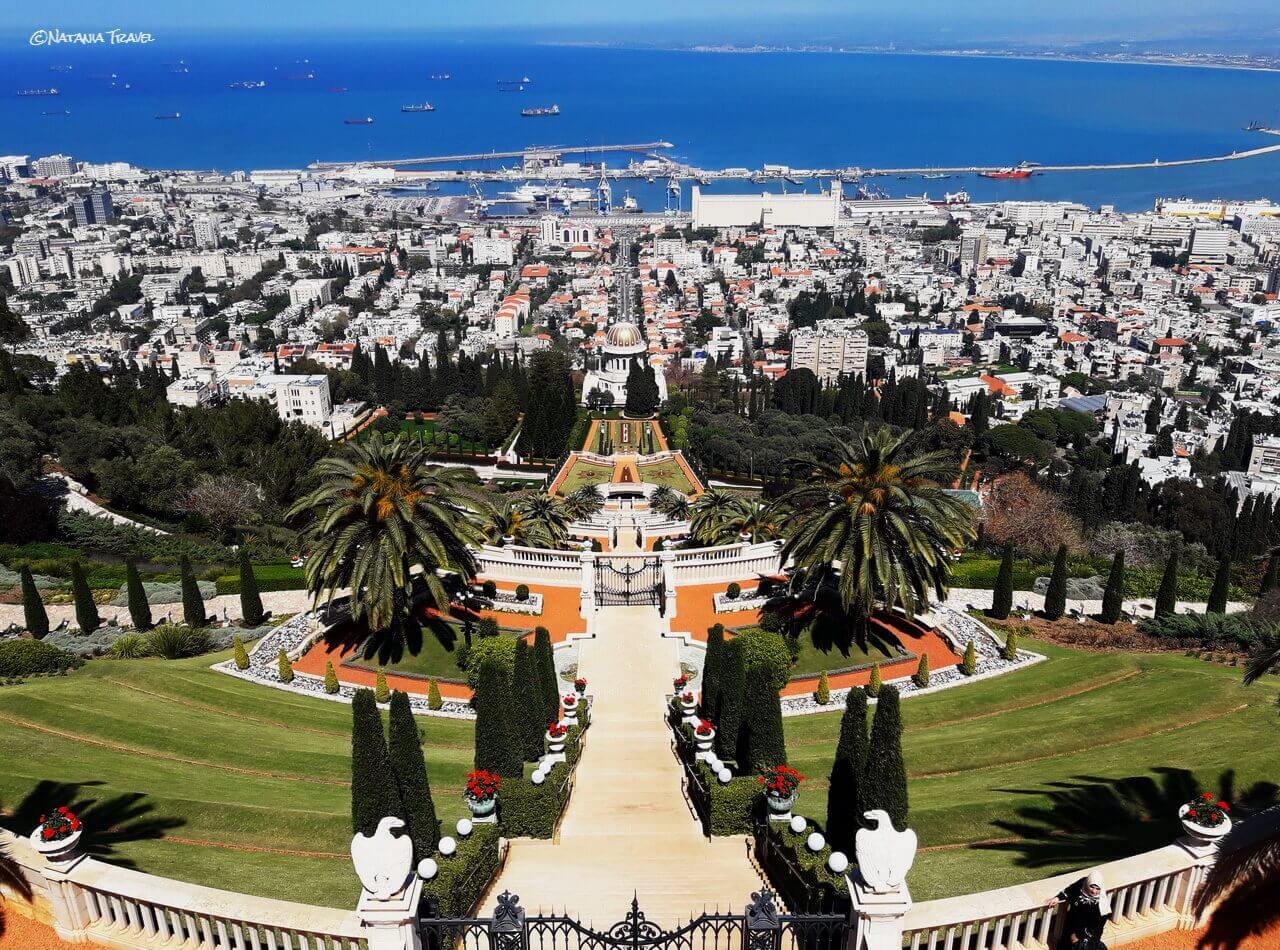 The Bahá’í Gardens and Haifa Bay

Here you can see so many colors and shapes but in perfect harmony. The garden’s staff includes 90 local workers from various ethnic and religious communities and 50 Bahá’í volunteers from about a dozen countries.

They really do an amazing job. The gardens are beautifully maintained. It’s a fantastic place for relaxing, meditation, and spiritual experience. And you don’t have a feeling that you are in the center of the city!

The gardens are also illuminated throughout the night, making a magnificent view of the city.

The Bahá’í Gardens consist of eighteen terraced gardens and one central terrace, extending all the way almost one kilometer up the northern slope of Mount Carmel. The vertical distance between the bottom terrace and the top one is 225 meters.

On the central terrace is the golden-domed Shrine of the Báb.

The complex of terraces was designed by Iranian architect Fariborz Sahba. He began work in 1987 designing the gardens. The construction was completed in 2001 and the terraces were opened to the public, covering almost 200,000 square meters of land. 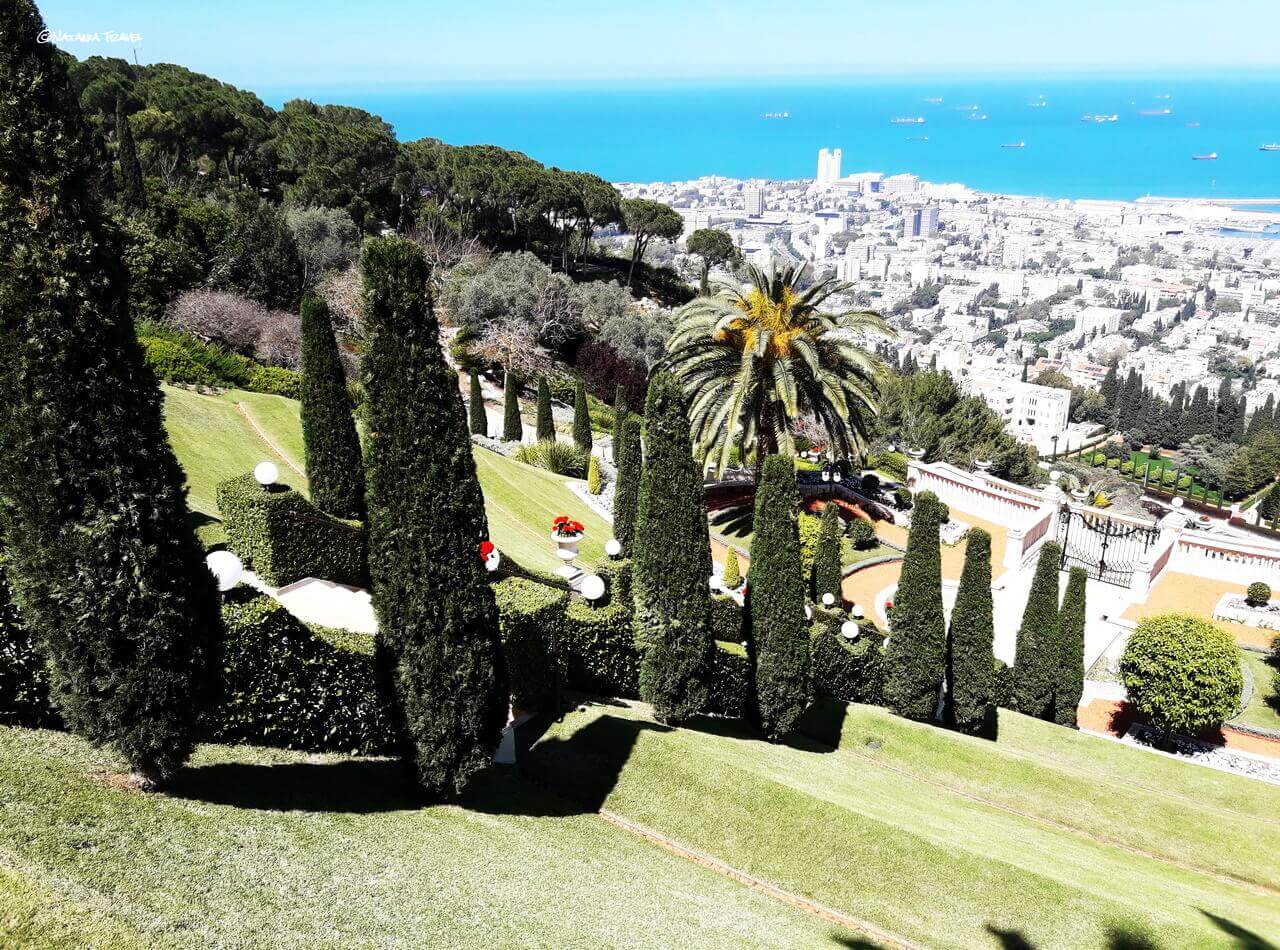 The terraces represent the first eighteen disciples of the Báb. Nine terraces are ascending from the Shrine to the top of the gardens and nine are descending. The Shrine of the Báb is on the central terrace and it makes nineteen terraces total. Nineteen is a significant number within both the Bahá’í and Bábí religions.

Close to the central part and the Shrine, under the gardens, there is a street! This is one fantastic and clever example of using space in designing and architecture. 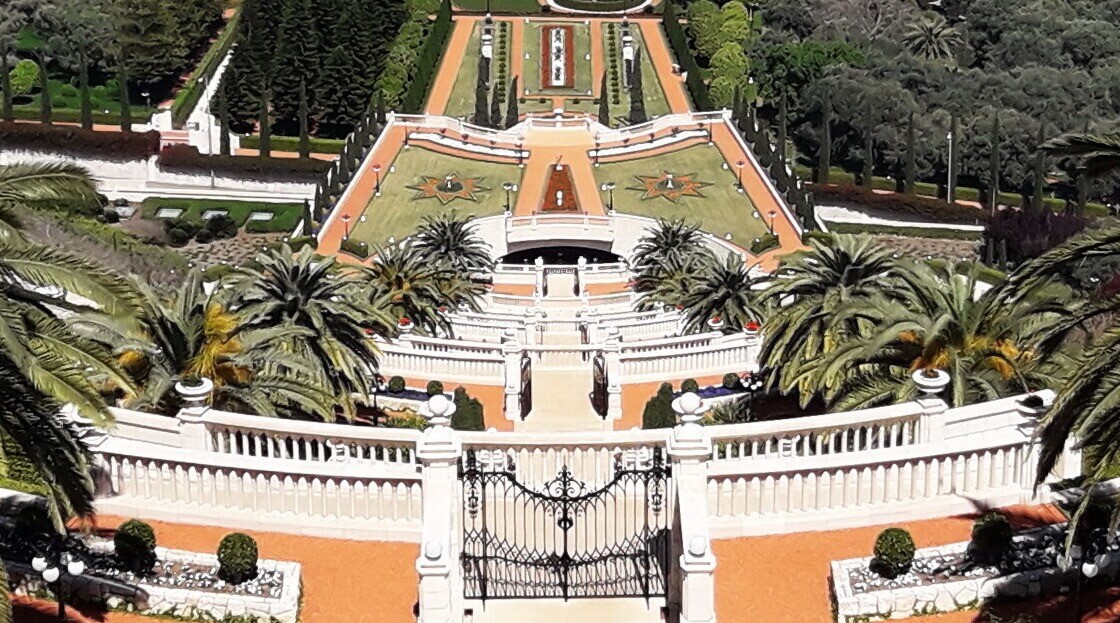 The gardens have elements of the Persian, Indian and English gardens. They are filled with colorful flowers and hedges in a form of circles and eight-pointed stars. The grass, shrubs, cypress trees, sculptures, stone eagles, palms, little pools, and water fountains are all around in the symmetrical terraces. About 450 plant species may be found in the gardens, and most of them are native to the region.

The Shrine of the Báb

The Shrine of the Bab is located in the central part of the gardens.
It is the resting place of the Prophet-Herald of the Bahá’í Faith and it is open for a public visit between 9 and 12 a.m.

The Shrine’s dome is covered with some 12,000 glazed ceramic tiles that have a very thin layer of gold leaf. And this shiny golden dome with colorful upper and lower gardens gives a postcard look of the entire complex! 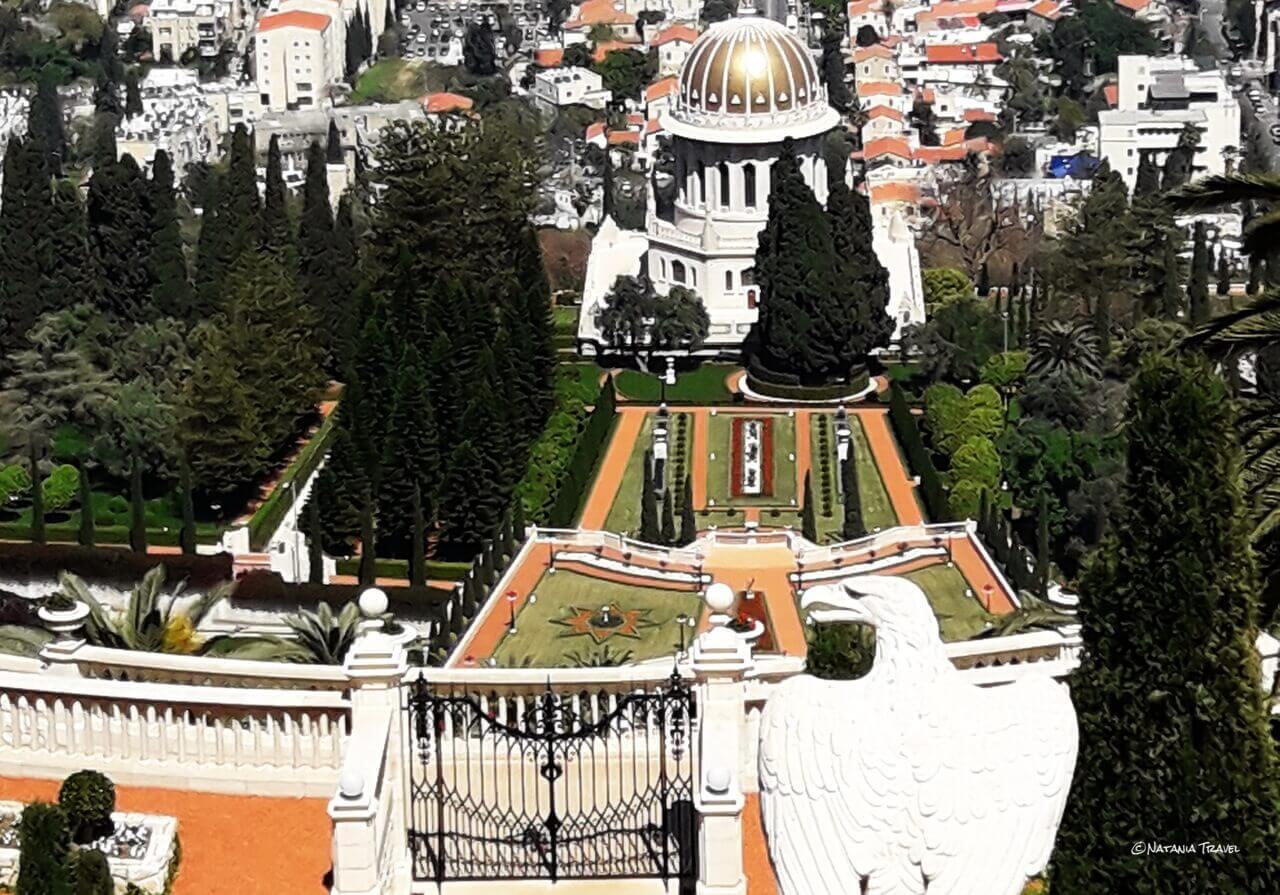 Close to the central part, there is Universal House of Justice, a dome-like neoclassical structure with the Corinthian columns, and the Archives Building, which looks like a Parthenon. But these administrative buildings are not open to tourists.

The Bahá’í Faith is a monotheistic religion, founded in the 19th century in Iran. This religion is similar and also different from the others which we are familiar with (Christianity, Judaism, Islam, Buddism, Hinduism, Chinese traditional religion).

„Bahá’ís believe that all religions come from the same source and are part of one ongoing educative process.
The unique God, Creator of the Universe, has educated humankind all through history by sending the prophets or messengers, such as Abraham, Moses, Jesus, and Mohammed, as well as Krishna, Buddha, and Zoroaster, who established the world’s major religions.“

They have two prophets for this age: the Báb and Bahá’u’lláh

The Báb or The Prophet-Herald was born in Shiraz, Iran in 1819, as Siyyid ‘Ali-Muhammad. At the age of only 24, the Báb proclaimed himself as a prophet or messenger of God during a period of intense messianic expectations in Iran.

Within a short time, hundreds of thousands of people started following him. But the clergy declared him a heretic and instigated a wave of persecution during which thousands of his followers were tortured and killed. He was arrested and after three years executed in a public square in the city of Tabriz, in Iran, on 9 July 1850.

The Báb´s followers took his remains and hid them in different places for fifty years. Finally, they brought the remains to the Holy Land and buried them in the simple stone structure on Mount Carmel. In the following years, it was completed as a shrine with a golden dome.

Mirza Hussein Ali (1817-1892), later known as Bahá’u’lláh (Glory of God) was born into a noble family from Iran. His father was a minister in the royal court, but he chose to become one of the Báb´s followers. Like many others, he was imprisoned and tortured.

Bahá’u’lláh and his family were banished from Iran in 1853. The first exile was Baghdad, and in August 1868, the Sultan of Turkey sent him to Akko (today’s in Israel territory), the town where Turkish used to send the political prisoners.
In Akko prison, he wrote his “Most Holy Book” (Kitab-i-Aqdas), which is used today as the holiest book in Bahá’í teaching, as well as many secular and religious rulers.

Bahá’u’lláh died on 29. May 1892, and his remains were buried in a small house where he lived. This place became the Shrine complex and the spiritual focal point for Bahá’í Faith.

The main principle of Bahá’í teachings is that humankind is one and they even propagate enjoyment of life.
Three principles are central to these teachings: the unity of God, the unity of religion, and the unity of humanity. So, Bahá’ís are against great social differences, advocating for one world language and one court of justice. And they believe in the equality of men and women, and the necessity of universal education.

In the Bahá’í Faith, there is no professional clergy. The Head of the Bahá’í Faith is the Universal House of Justice, whose nine members are elected every five years by the members of all the national councils.

Well, everyone can join Bahá’í Faith. There are no initiation ceremonies, no sacraments, and no dietary restrictions. But there are some obligations and prohibitions.

Some obligations, some prohibitions…

Bahá’ís over the age of 15 have obligatory daily prayers, using fixed words and form, meditate, study sacred scripture, and an annual period of fasting.

They should make a 19% voluntary payment on any wealth in excess of what is necessary to live comfortably, which is used for philanthropic purposes. It means that donations are only accepted from members of the Bahá’í community.
And there are some specific requirements for Bahá’í burial that include a specified prayer to be read at the interment.

But some things are strictly prohibited, such as backbiting, gossip, gambling, selling or using alcohol, narcotic and hallucinogenic drugs. Also, sexual intercourse is only permitted between a husband and wife. So, the premarital, extramarital or homosexual intercourses are forbidden. Well, the matrimony is “a fortress for well-being and salvation and the family as the foundation of the structure of human society” for them.
The abstaining from politics is required. And begging as a profession is forbidden as well.

Hm, if I may notice, there are some very interesting beliefs in Bahá’í teaching… 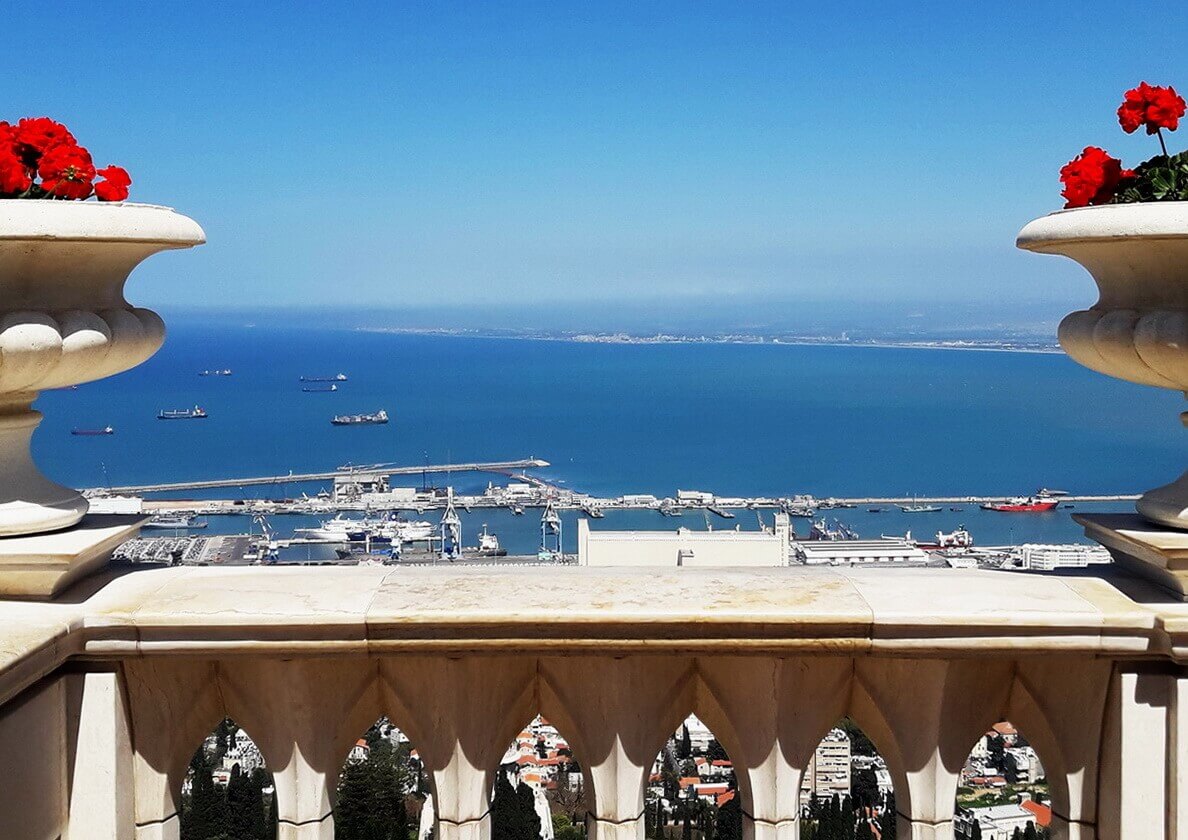 The five-pointed star is the official symbol of the Bahá’í faith, initiated and established by the Báb. However, they more frequently use number 9 and the nine-pointed star as Bahá’í symbol.

Bahá’ís use a calendar established by the Bāb as well.
In this calendar, the year is divided into 19 months of 19 days each, with the addition of 4 intercalary days (5 in leap years). The year begins on the first day of spring, March 21st, which is one of several holy days in the Bahá’í Faith.
And each of the 19 months is given a name which is an attribute of God.

Today the Bahá’í community is made up of over five million people in the world.

The largest national Bahá’í community is in India, and the most important Bahá’í houses are in Australia, Cambodia, Chile, Germany, Panama, Samoa, the United States, and Uganda. In the temples there is no preaching; services consist of the recitation of the scriptures of all religions.

Since its inception, the Bahá’í Faith has had involvement in socio-economic development. Today they are connected with organizations such as UNICEF, UNIFEM, ECOSOC, UNEP, WHO. Also, the Bahá’í International Community has offices at the United Nations in New York and Geneva, and representations to United Nations regional commissions.

There are three areas of the gardens from which you can visit from different parts of the city.
The main entrance gives access to the golden-domed Shrine of the Báb and the extensive gardens on the same level. 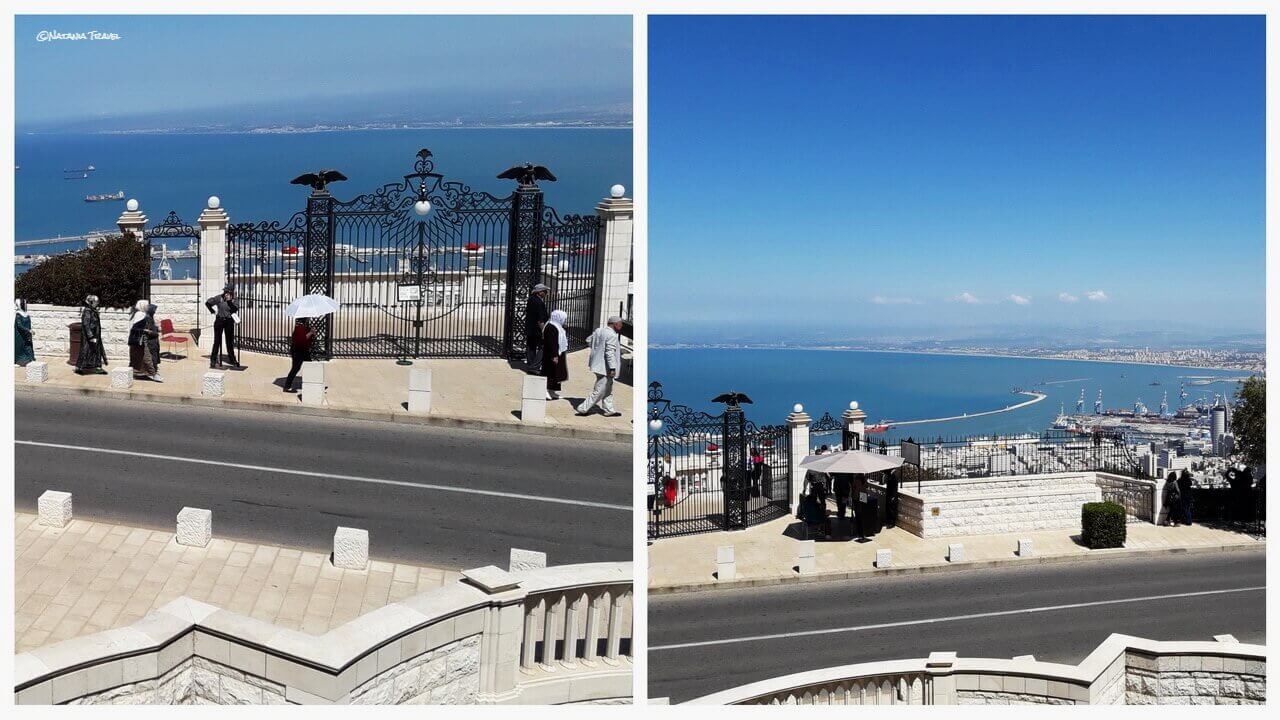 The Bahá’í Gardens, the entrance, and viewing balcony

On the top is the viewing balcony, which overlooks the gardens, at 61Yefe Nof Street, at the end of the Louis Promenade.
And the special entrance for the Panorama Tour is at 45 Yefe Nof Street, 120 meters west of the viewing balcony. This tour lasts about 50 minutes and ending at the main garden’s entrance on Hatzionut Avenue. The walking tours are offered daily except Wednesdays, in English, Hebrew, Arabic, and Russian language.

The bottom of the gardens is in the Germany Colony Plaza, the junction of Ben Gurion Avenue and Hagefen Street. 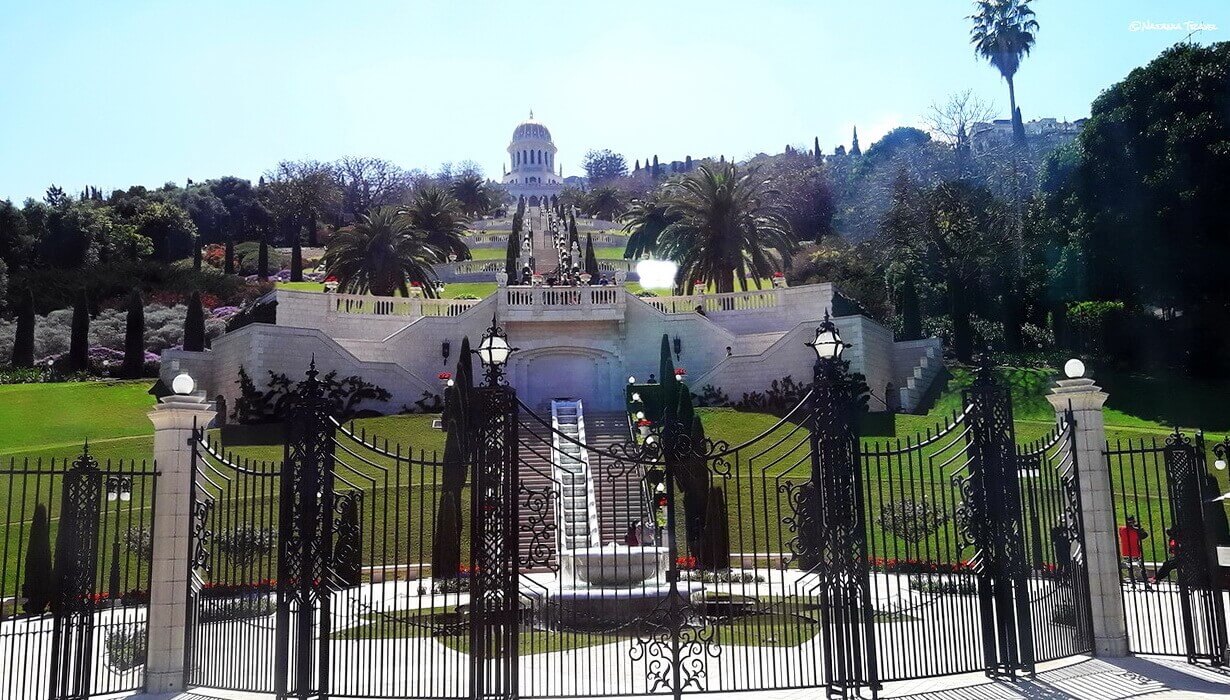 The bottom of the Bahá’í Gardens

NOTE: All tours and visits are free of charge!

The gardens are closed during the Bahá’í holy days. Also, it can be closed temporally because of bad weather conditions.
You can see more details about visiting the gardens here.

What you should know before visiting the Bahá’í Gardens

The Bahá’í Gardens is a holy place. Therefore there are some things you should know before a visit:

The Hanging Gardens of Haifa

Since we had a limited time to visit Bahá’í gardens, known also as “The Hanging Gardens of Haifa”, we didn’t pass the whole way through the gardens and its terraces. But at least for a while, we enjoyed a magnificent view of the gardens, Haifa city, the Galilee Hills, and the Mediterranean Sea.

Well, the view from the top of the gardens and Haifa bay is really breathtaking! 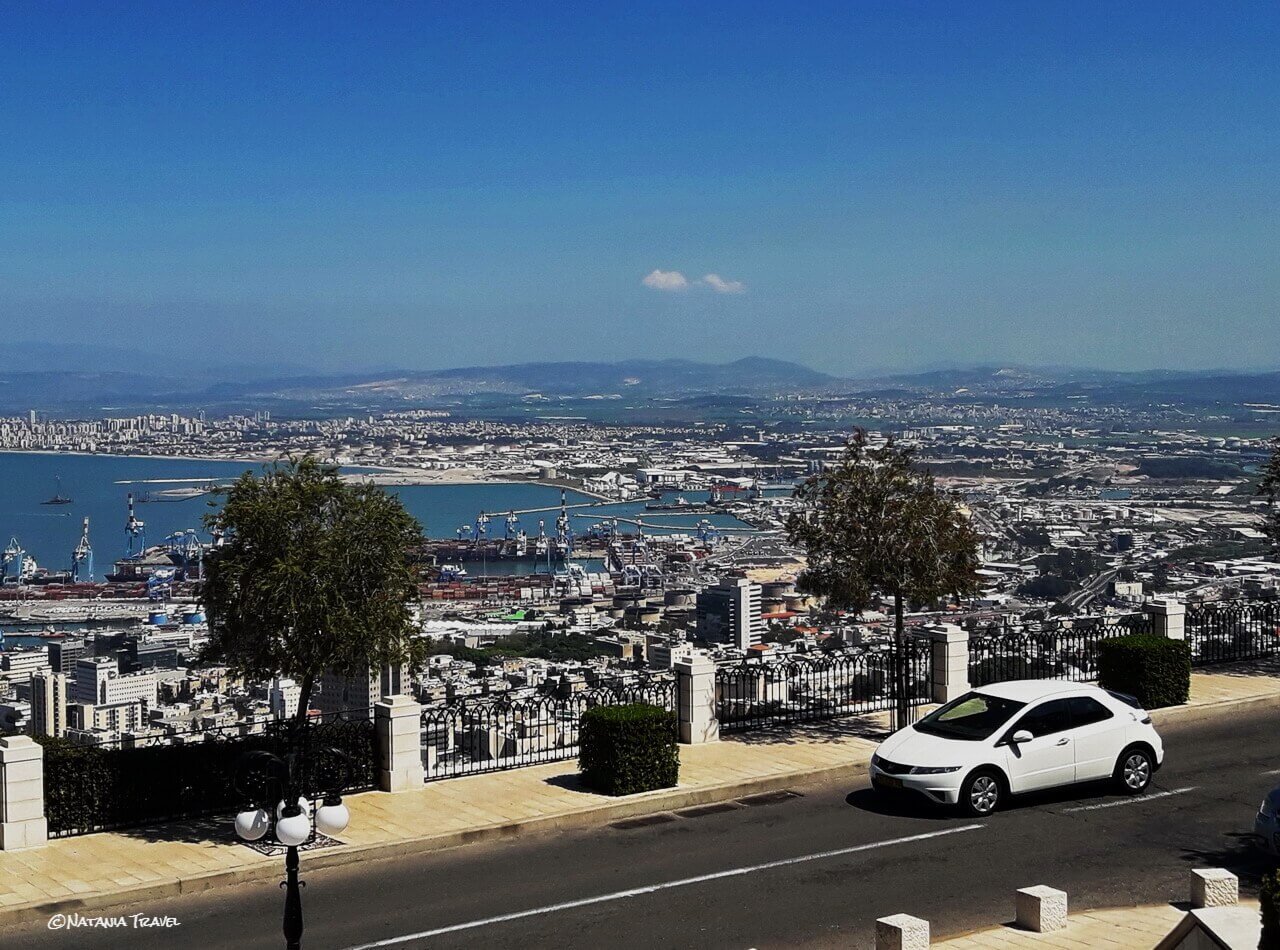 The view on Haifa Bay

Even today, the memory of the Hanging Gardens of Haifa brings back a smile on my face and fills the heart with incredible calm and peace.

And regarding Bahá’ís teaching, love, peace, justice, and harmony are the most important values in our lives, no matter where we are living and which religion we belong to. 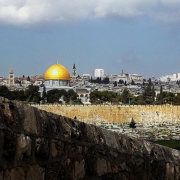 www.nataniatravel.com Israel, the place where the past and present live together
4 replies

Sailing around the Milos island 🌊🌊🌊 Amazi

I miss this colors.... . . #lefkada #lefkadaisland