The fairy tale city of Óbidos

Óbidos is a small and beautiful medieval city in the Oeste region in Portugal.

We visited it during our Portugal tour with the Filip travel agency in 2015. And we were pleasantly surprised that day: during our visit on the 1st of May, the International Chocolate festival was held in this picturesque city!

Every year the chocolate festival is held in a different period in spring. And it usually lasts two weeks in the period from March to May. This year (2018), for example, the XVI festival took place from 23rd February to 18th March.

During the chocolate festival, the visitors can attend culinary classes with chocolate as the main ingredient. They could watch the competitions for the best chocolate recipes and the best Chocolatier as well. Kids also have an opportunity to prepare several chocolate desserts and take part in recreational and pedagogical activities.
For sure everyone enjoys eating chocolate in different shapes and admire sweet masterpieces – chocolate sculptures. 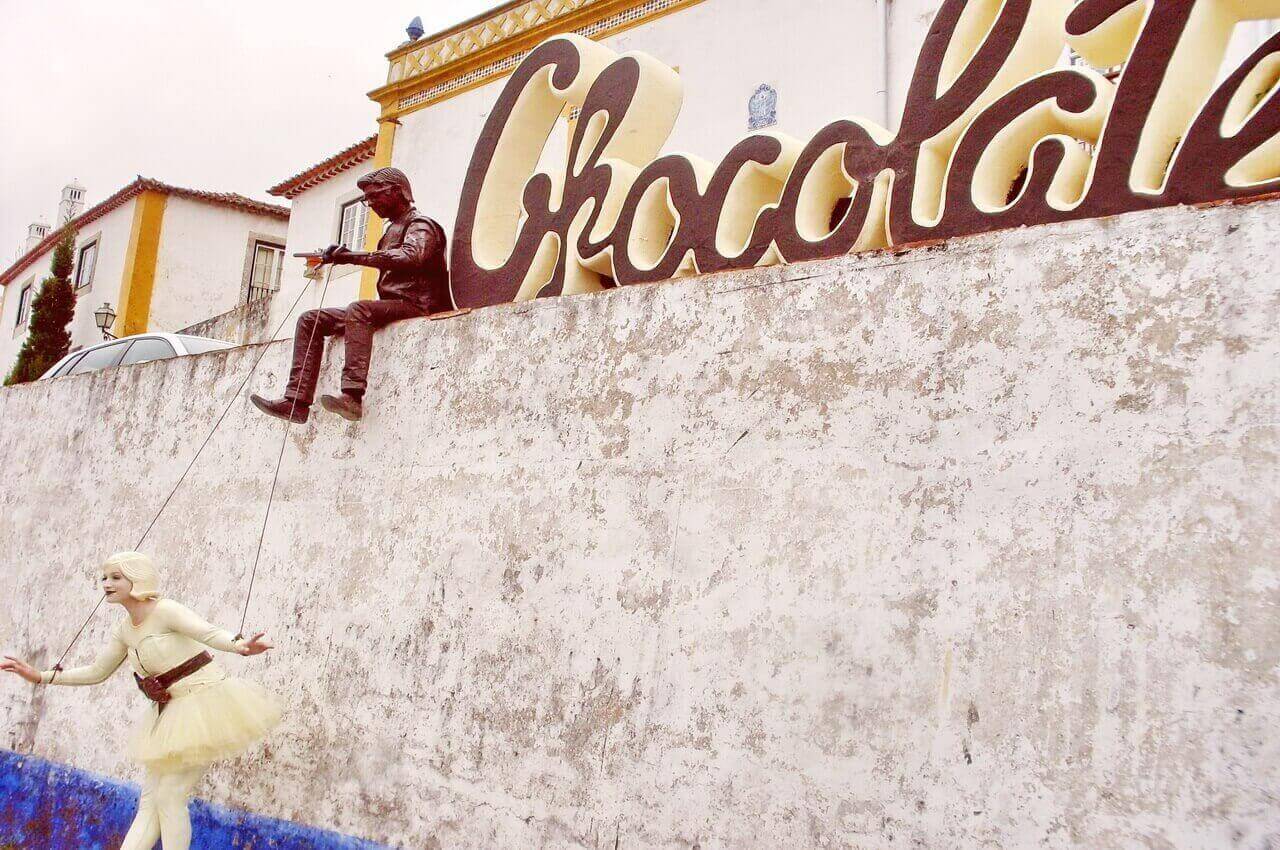 What to see and what to do in Óbidos

Óbidos is located on a hilltop and it is encircled by the medieval walls. 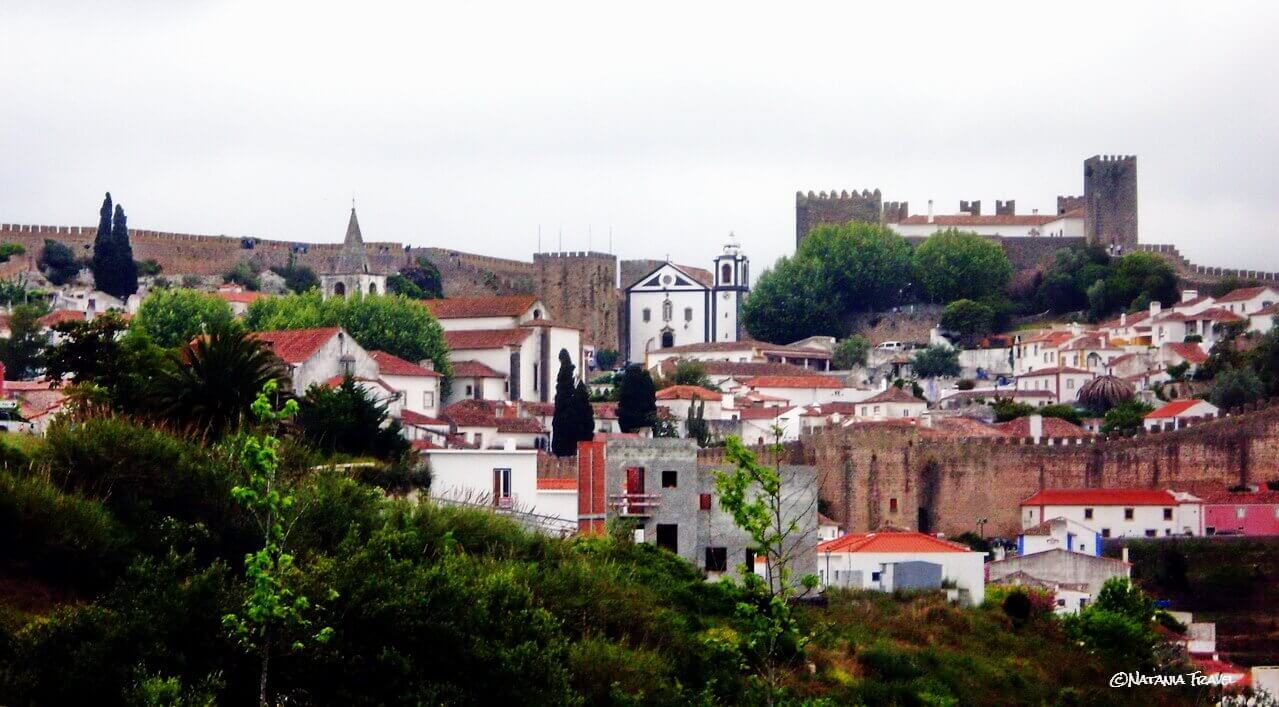 Inside the walls, you can see the well preserved Usseira Aqueduct, about 3 km long, from the 16th century.
It was funded by Queen Catherine of Portugal, constructed to bring fresh water to the village, vineyards, and orchards. 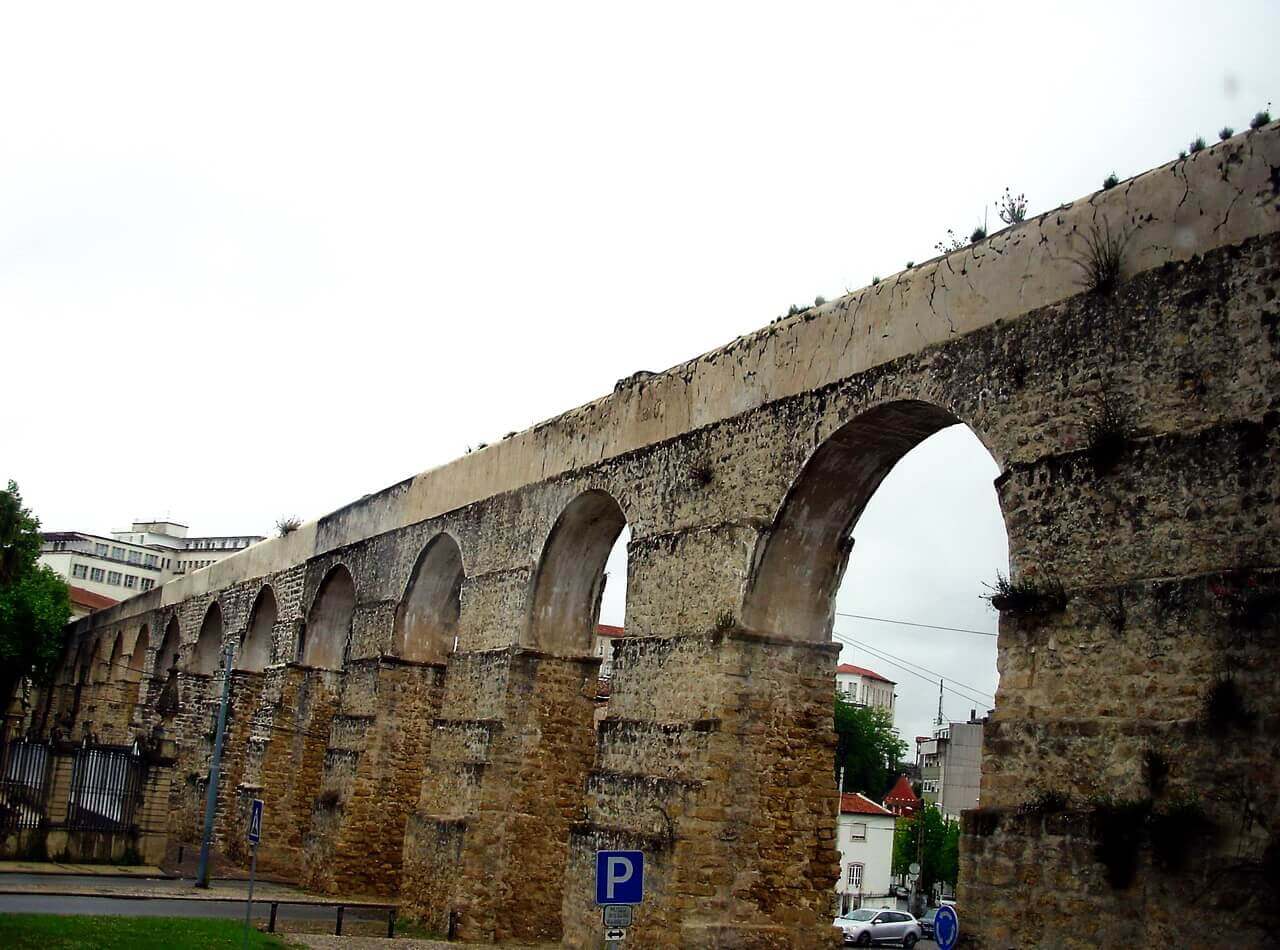 The main gate into the city is Porta da Vila from the 18th century.
It contains a beautiful little chapel, decorated with blue and white glazed tiles, called Azulejos, which depicts the passion of Christ while the ceiling represents the crown of thorns. The Porta da Vila has two low-rise entrances that prevented attackers to enter the town, similar to other gothic Portuguese castles. 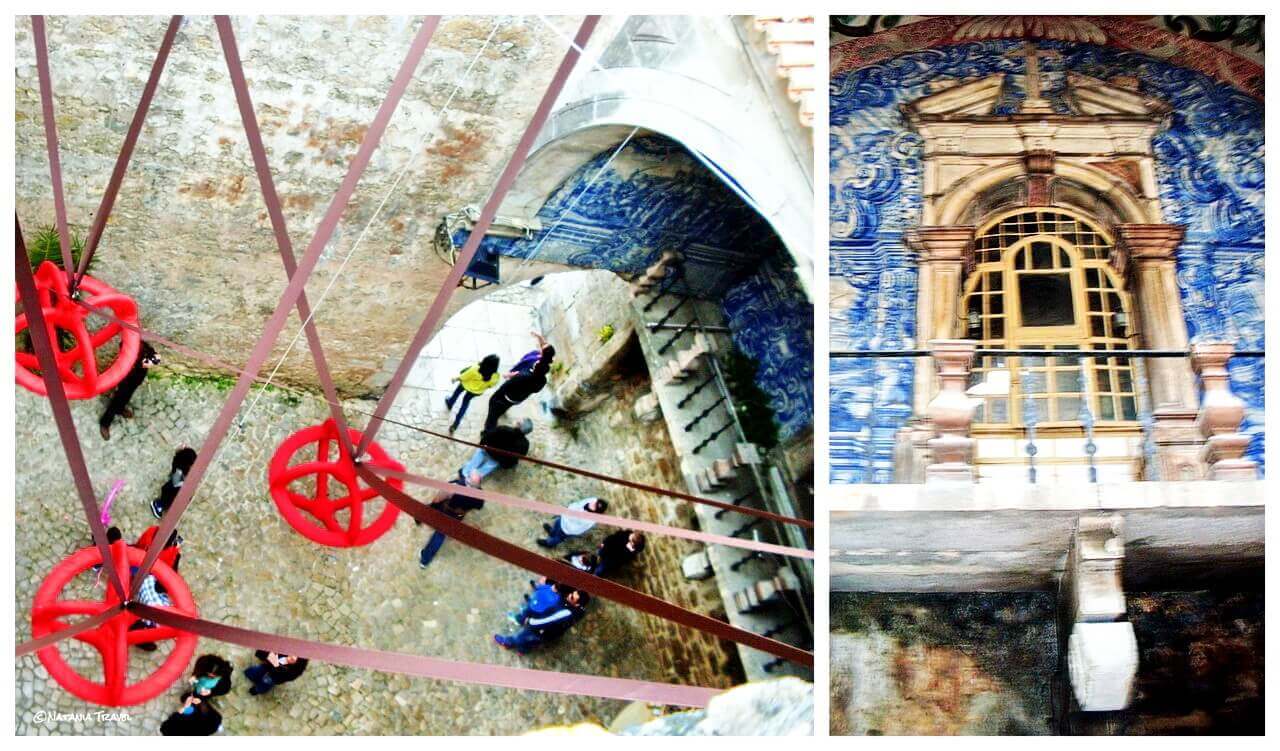 The centre consists of a cobbled street.

Traditional houses are painted in white, and the corners are bordered with blue or yellow lines. 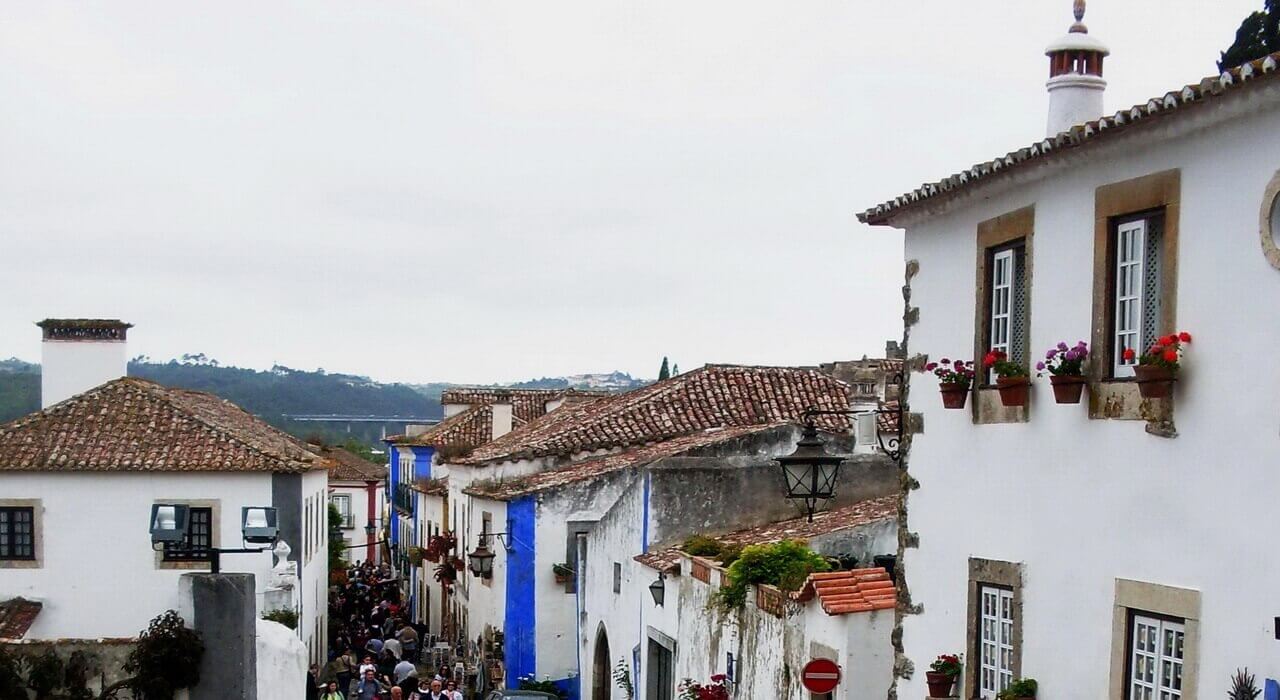 Along the walls, you can see climbing plants, colourful bougainvillaeas, and various flowers. 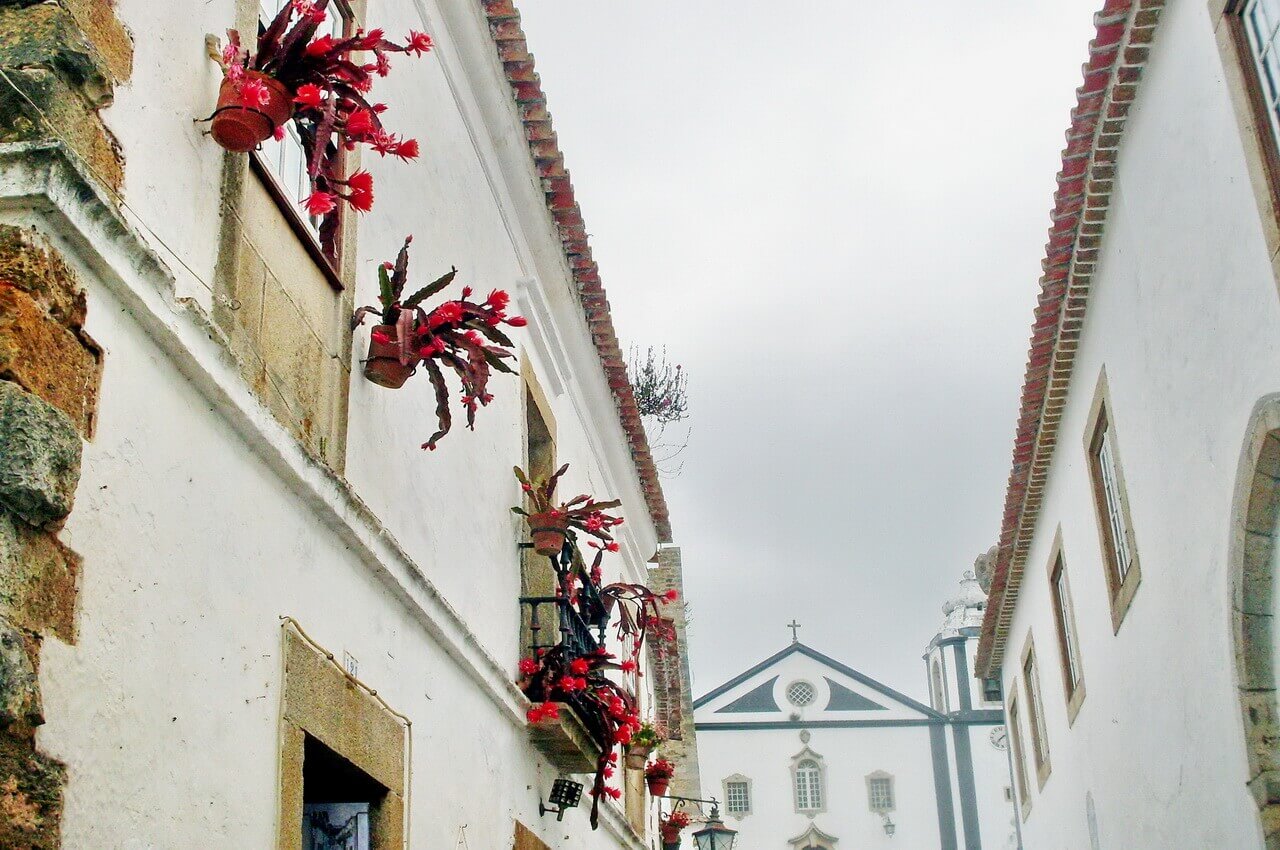 Although it was a cloudy day, the main street, Via Rua Direita, was full of people.
Here you can find the shops with souvenirs, wines, liqueurs, traditional ceramics crafts. 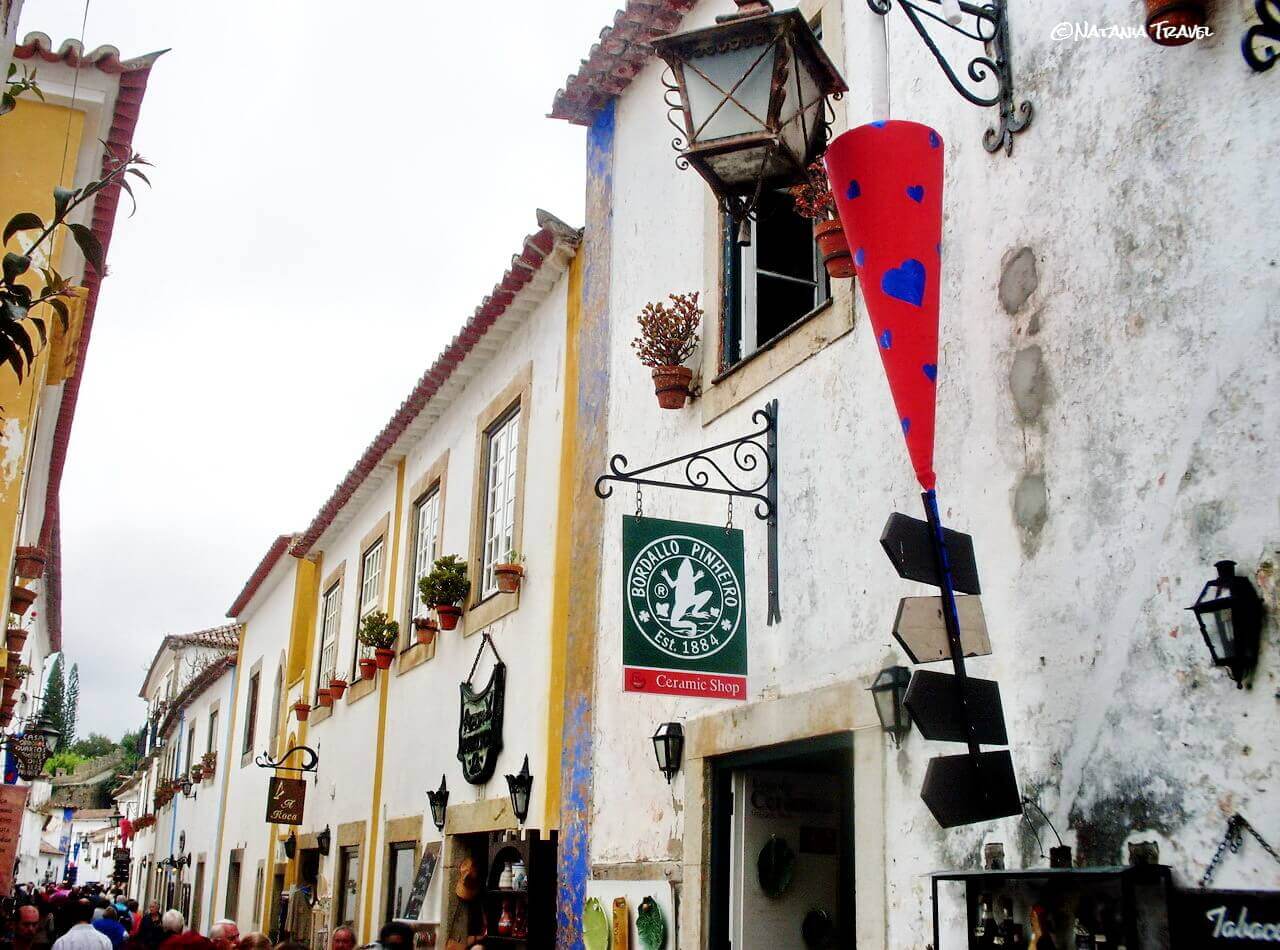 Among the visitors, in the crowd, we saw a couple of street artists dressed up in „chocolate“ 🙂 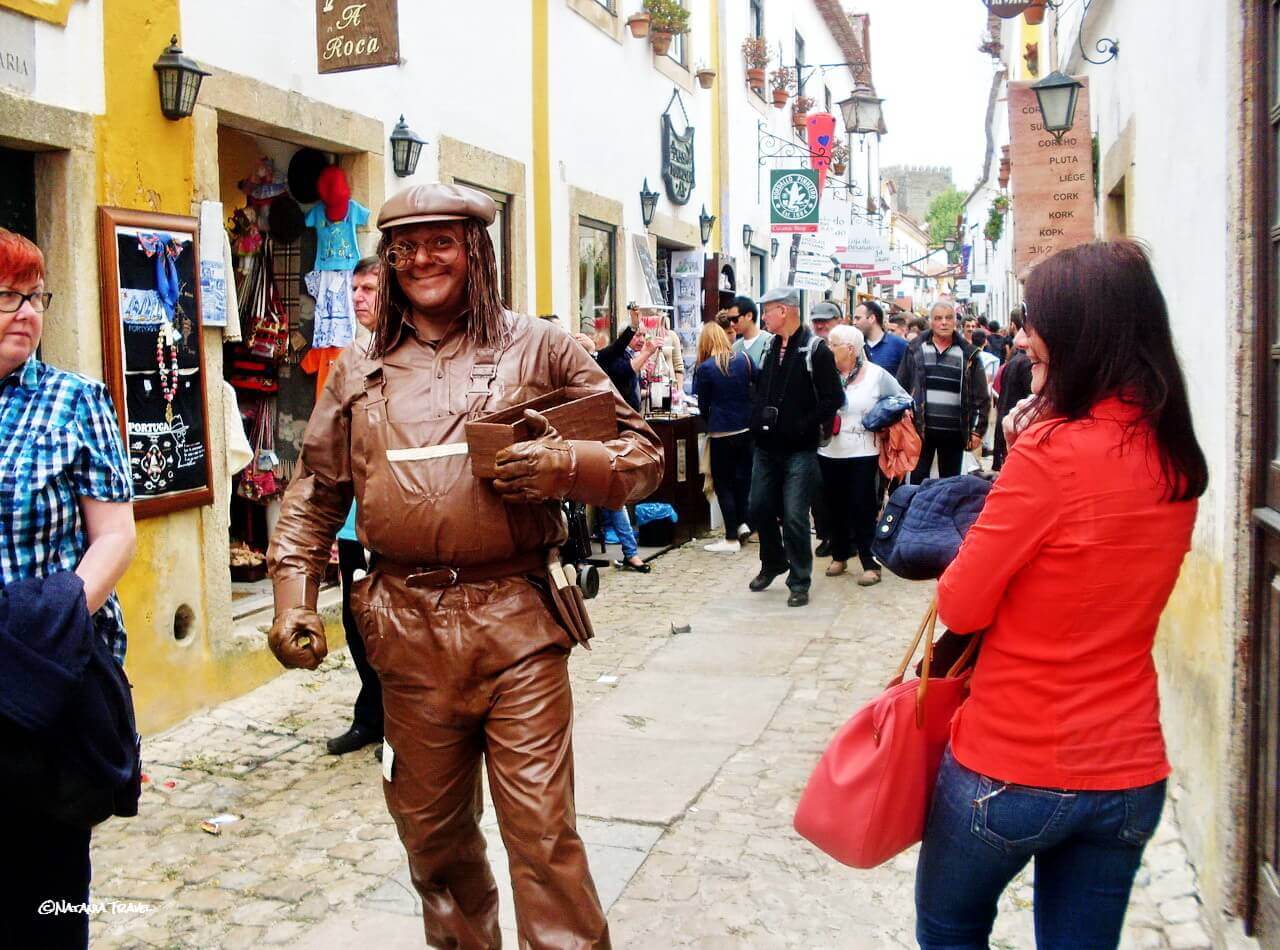 And then we saw a “chocolate girl” 🙂 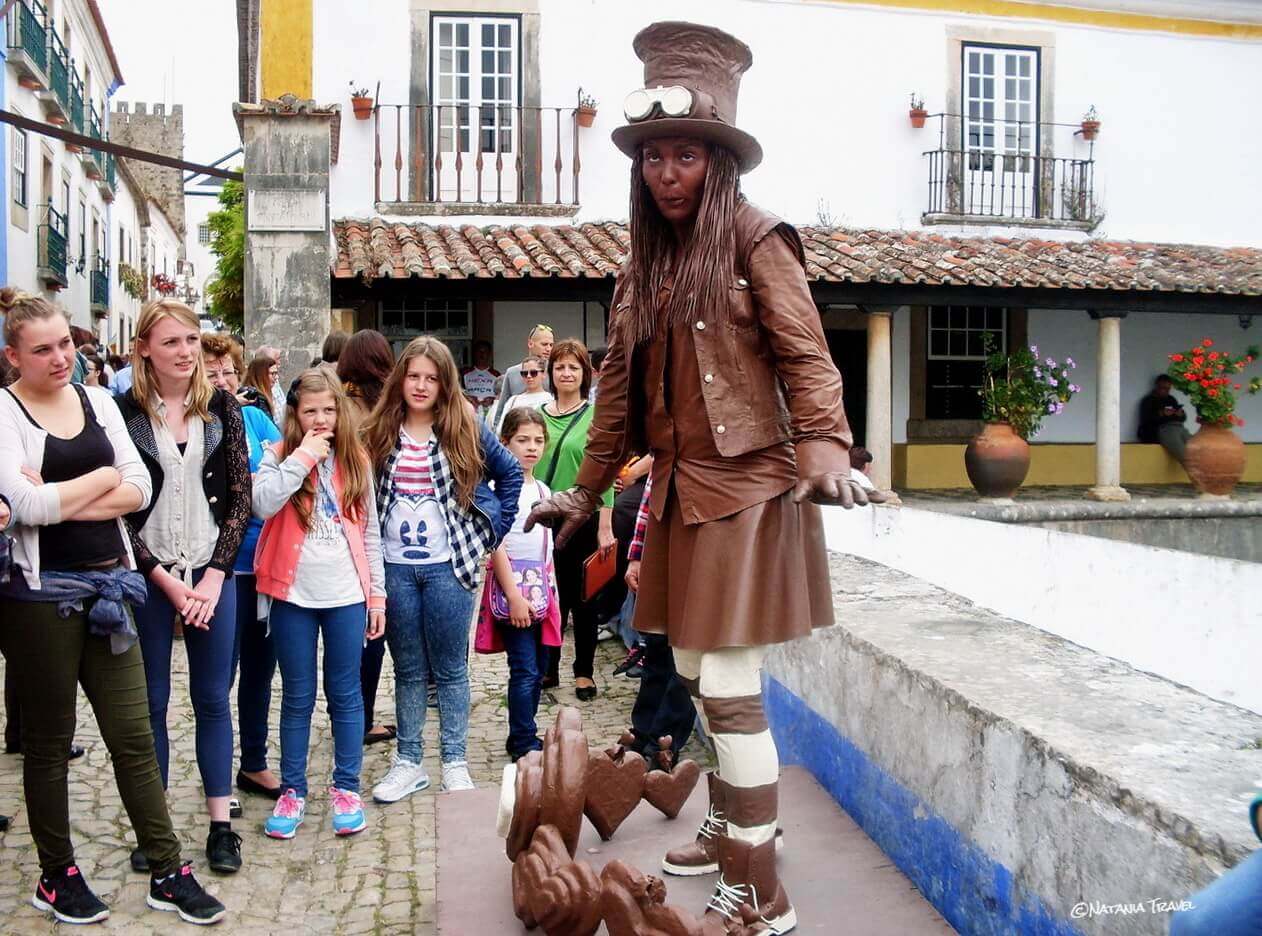 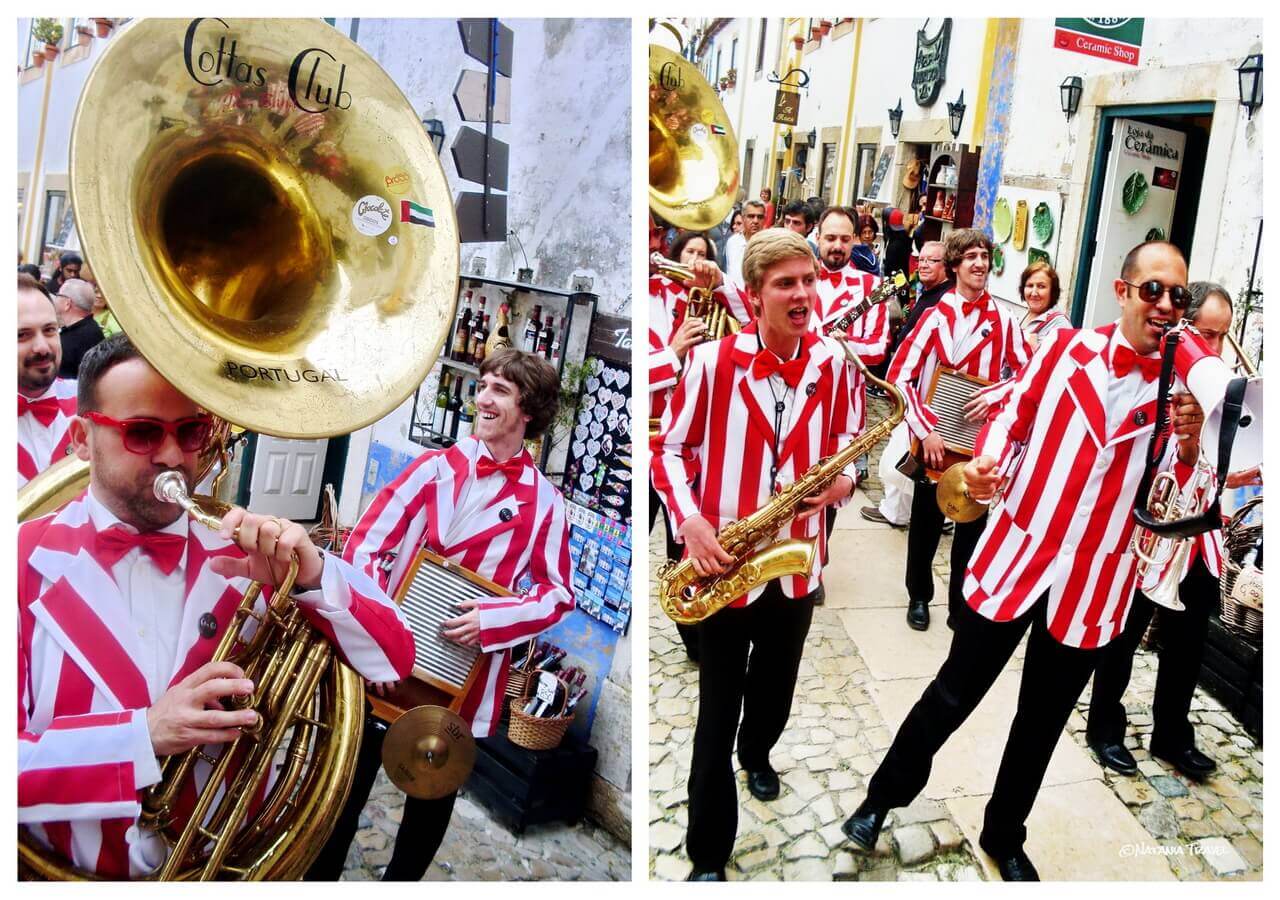 The locals say that a trip to Óbidos is not complete without tasting the sweet alcohol drink: Ginja de Óbidos (Ginjinha de Óbidos).
Ginja is a homemade liqueur. It is produced by infusing Morello cherries from the Obidos region in alcohol, adding sugar and other ingredients.

The liqueur Ginja is served with a cherry in a shot glass.
But there is one special way to taste it: they put Ginja in a little chocolate cup!

First, you drink Ginja and then eat the cup. Well, it is a perfect mix and fantastic taste 🙂 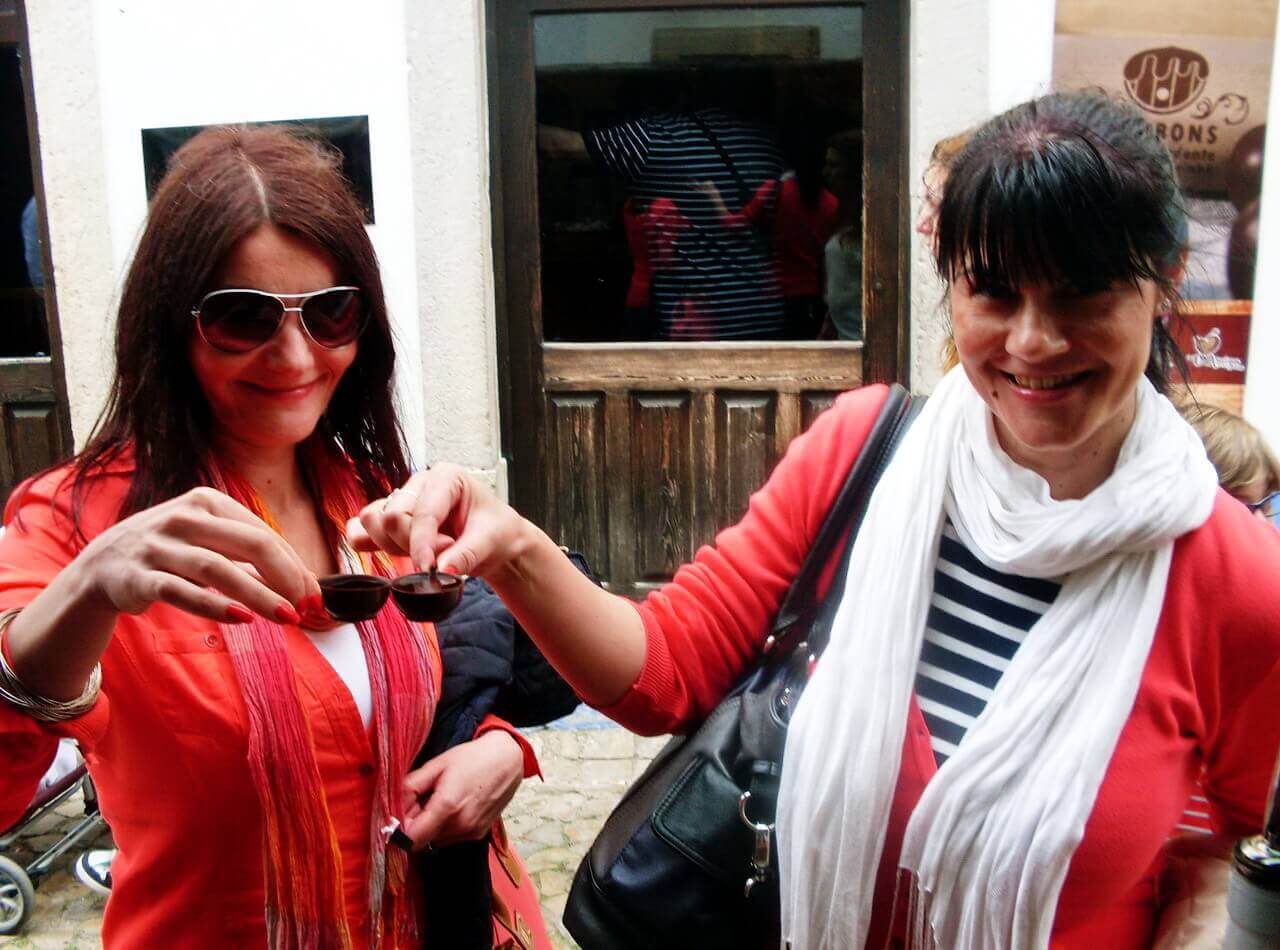 You can buy a small Ginja bottle packed with these chocolate cups, as a traditional gift.
Hm… our gifts were consumed before we finished our visit to Óbidos 🙂

Ginja is one of the favourite Portuguese liqueurs and drinks in Lisbon, Alcobaca, and, of course, Óbidos. 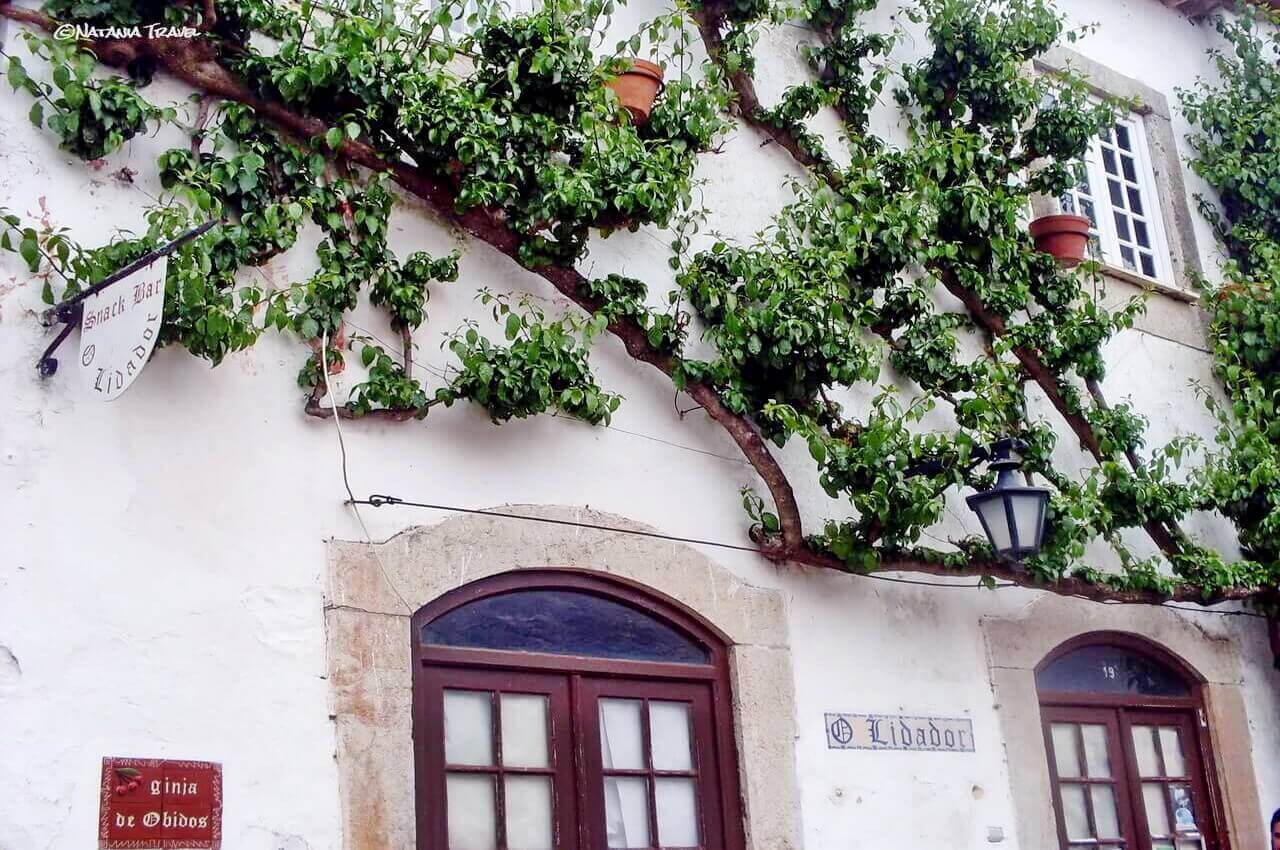 Walking down the narrow streets of Óbidos, in the main square of the town, we saw a church with a bell tower and renaissance portal, The Igreja de Santa Maria (Saint Mary’s Church). During the rule of Moors, the mosque was built here. But when D. Afonso Henriques (the first Portugal king) conquered the city in 1148, the mosque was replaced by a Christian church.

In this church in 1441, Infante D. Alonso (later the King D. Alonso V of Portugal) married his cousin Isabel when they were almost kids. 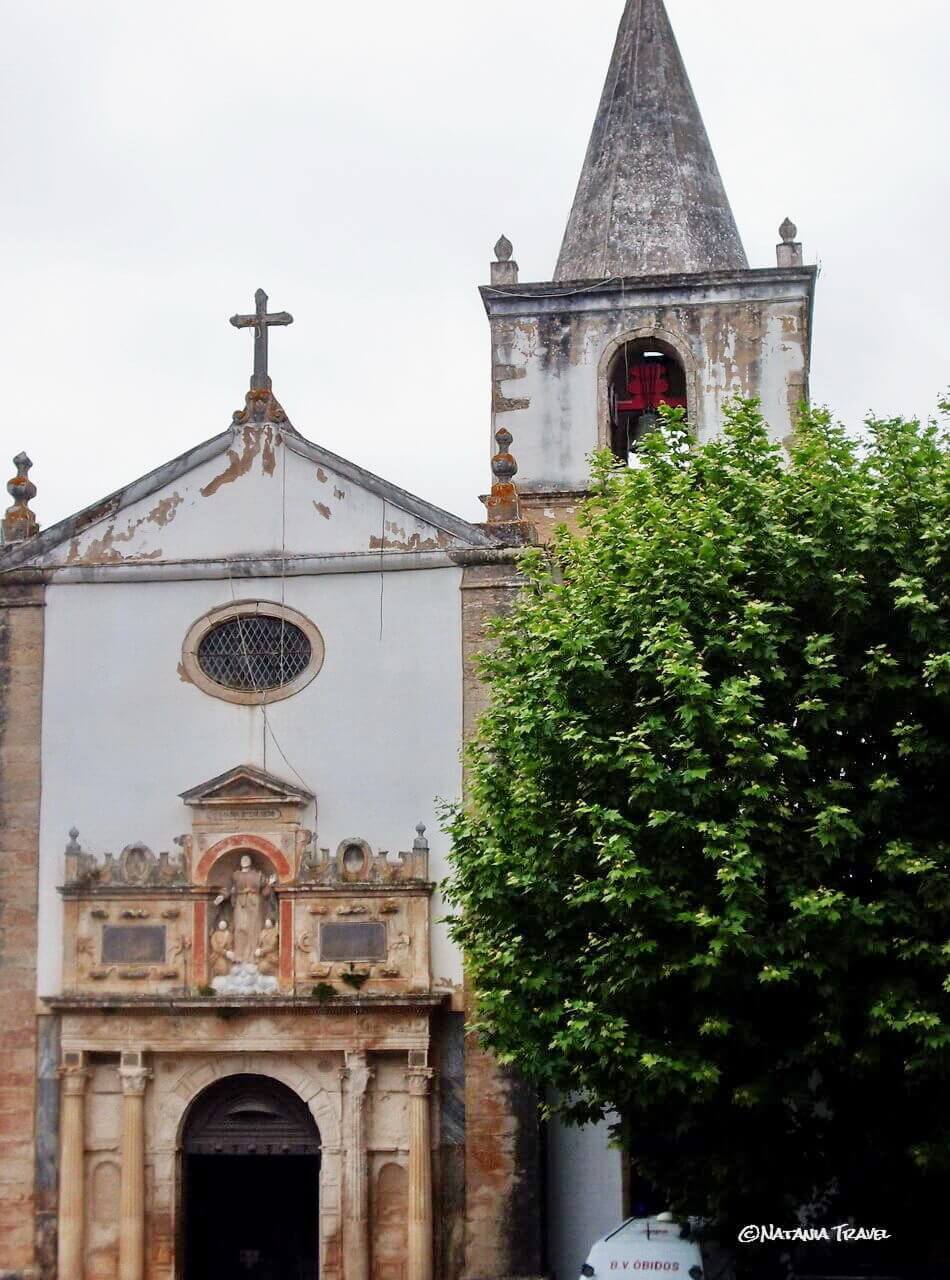 And another impressive church is Igreja de Santiago, built in 1186 at the orders of Dom Sancho I. 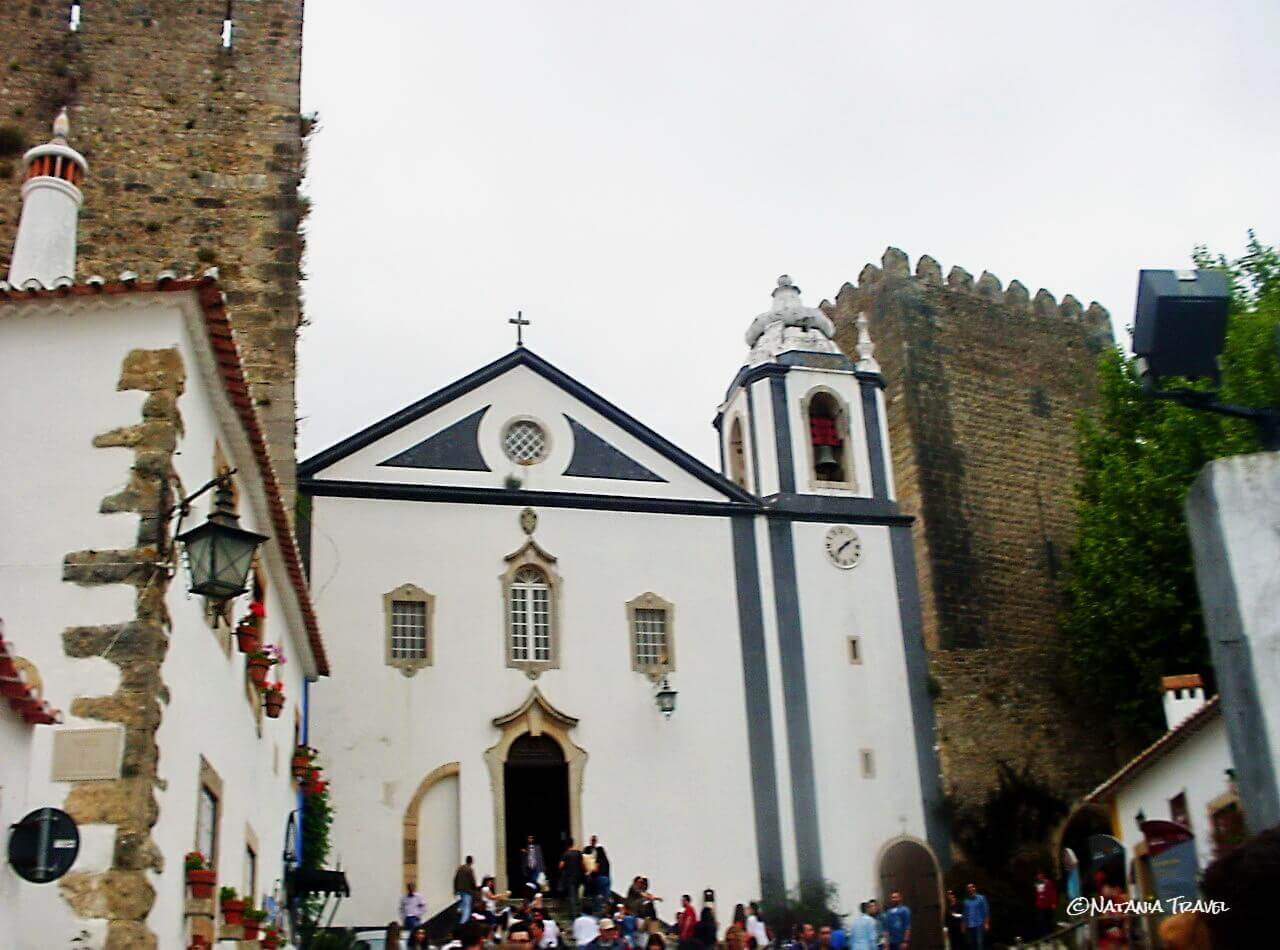 Igreja de Santiago was a collegiate church serving the castle: Castelo de Óbidos, which was built by the Moors in the 8th century.
King Dom Dinis rebuilt the castle and made it the Royal Palace. His son King D. Afonso II donated the castle to his wife D. Urraca in 1210.

Then, another king Dom Dinis also gave the city as a wedding present to his wife, Isabel of Aragon in 1282.
From then until 1883, Óbidos and the surrounding land were always the property of the Queens of Portugal. And got the name “Queen’s Town“. 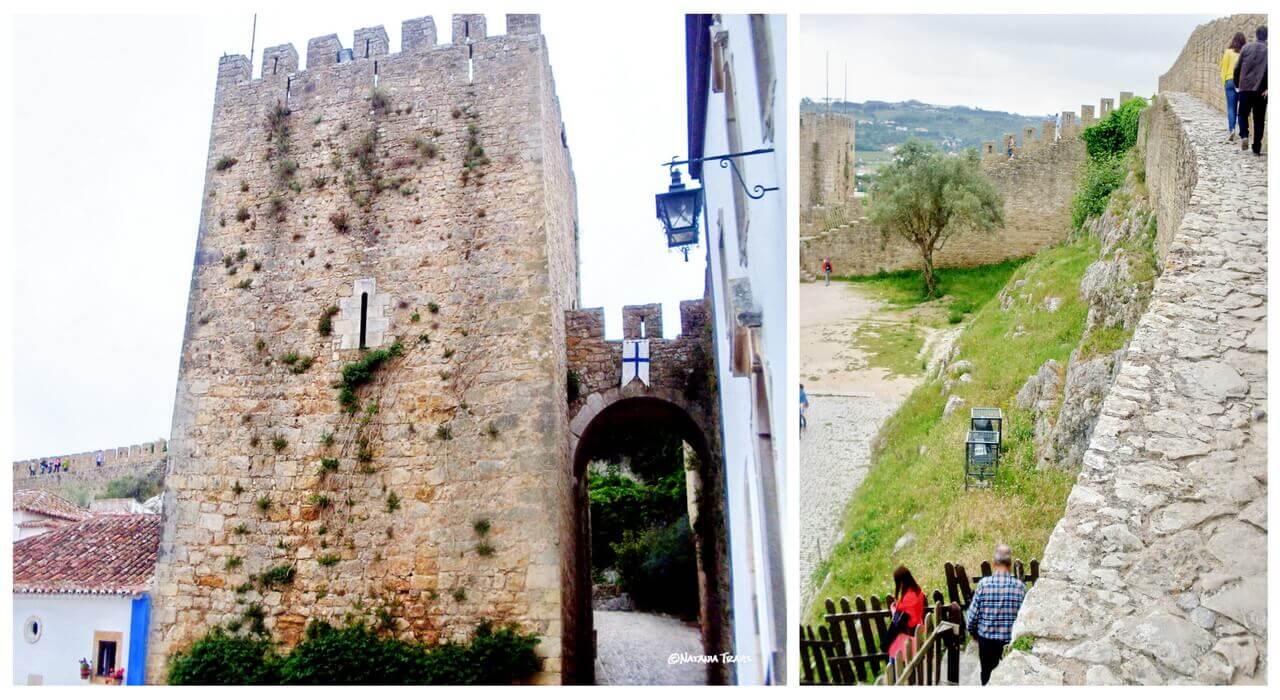 Walls of the Castelo de Óbidos

The castle architecture has elements of Romanesque, Gothic, baroque, and Manueline style. This specific style was developed at the end of the XV and the beginning of the 16th century, during the reign of King Manuel I.

You can explore the castle garden and walk around the walls of the castle at about 1,5 km.
But very important: pay attention because there is no protective fence. 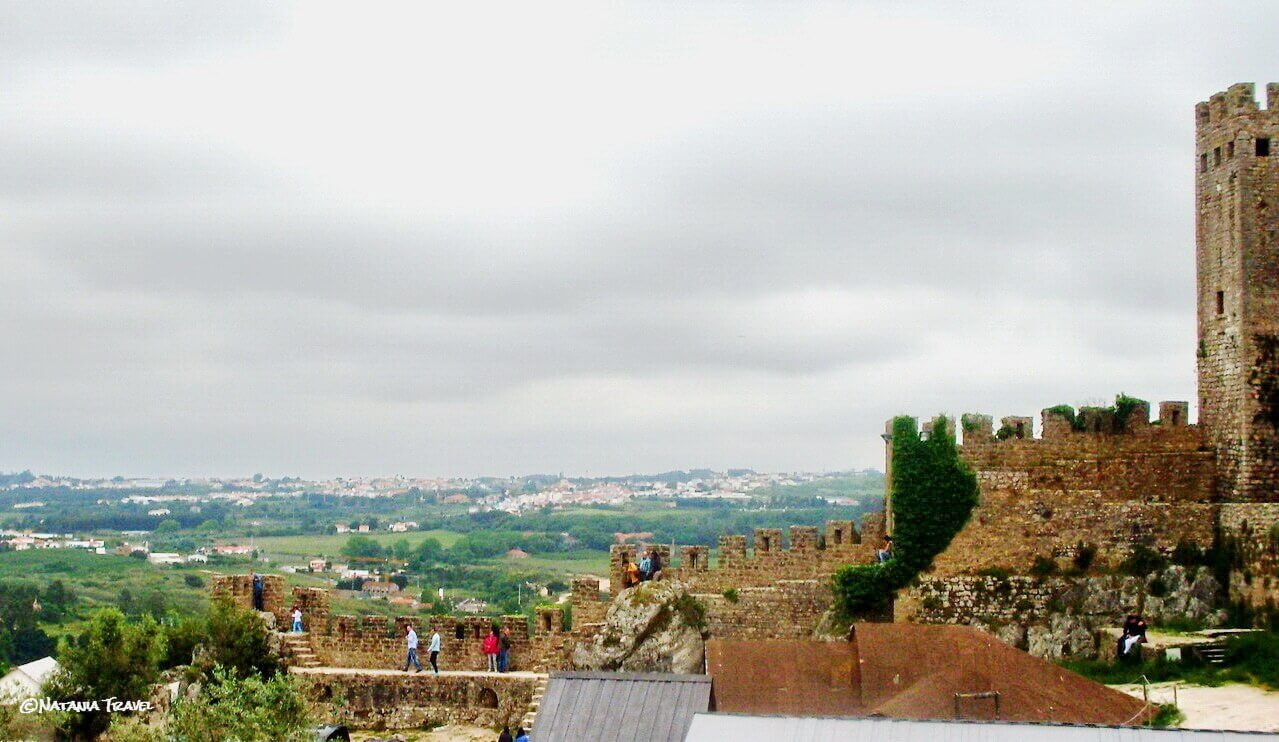 It is not permitted to enter the historic part of the castle because now it is a hotel – Pousada de Óbidos.  In 1950, it was classified as a National Monument and became the first Portuguese Pousada (heritage hotel) in a historic building.

In the city, you can visit the Municipal Museum and The Parish Museum, galleries of contemporary art, and little churches as well.

If you like golf, Praia D’El Rey Golf & Beach Resort is a perfect choice. It is one of the top golf resorts in Europe, located on a sandy beach in the protected rural area, close to the city. The golf complex includes a luxury hotel Marriott 5* hotel with a spa centre.

In addition to the Chocolate Festival, there is one more interesting festival worth visiting: Mercado Medieval de Óbidos.

It is the medieval market and fair, held in the middle of July and the beginning of August (open Thursday to Sunday).
In a word, the whole city is back in medieval times! The visitors can taste the local food and beverages from that period and enjoy a performance of dancers, minstrels, musicians, court jesters, jugglers, and jousting knights.

How to get to Óbidos?

Óbidos is located about 80 km north of Lisbon. So, the best way is to catch a bus (Rapida Verde Bus-Express Green). The journey takes about 1 hour and a single ticket costs about 8 euros.

But, it is not permitted to enter the historic part of the city by car. There is a large car park close to the aqueduct and the main bus terminal.

The fairytale town of Óbidos

You can stay in Óbidos a few hours or spend all day wandering along the narrow streets.

Take a break and enjoy the food in local restaurants.
Or you can stay over the night in Pousada hotel, little hotels or guesthouses where you can feel like at home. 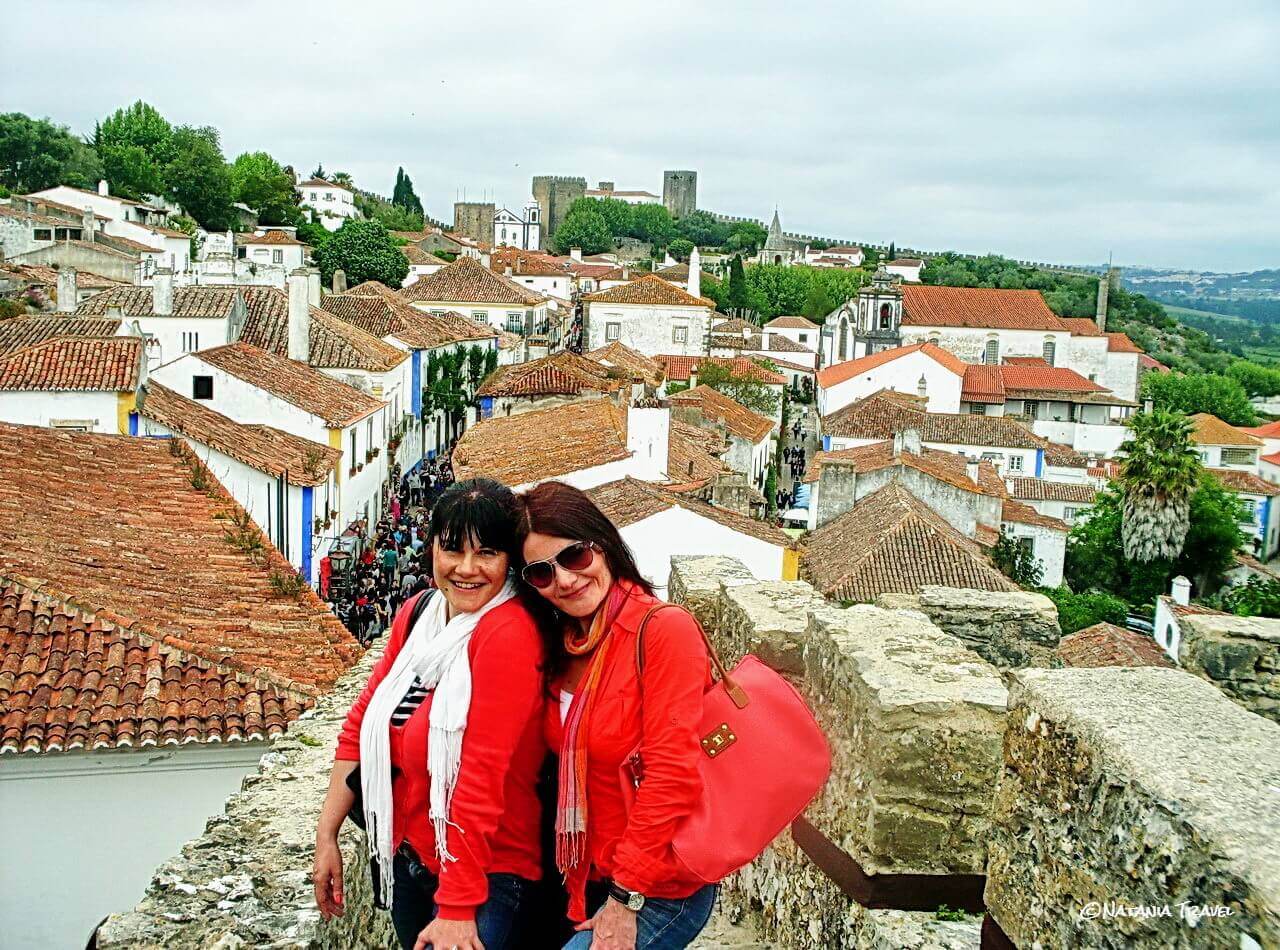 The fairytale town remains in a beautiful memory.
And the unique taste of the Ginja liqueur, served in a chocolate cup as well.