Methoni Castle is considered among the best-preserved castles in Peloponnese and Greece as well. It is a unique fortress with its fortified walls and is surrounded by the sea on three sides.

The castle of Methoni is located near the Methoni village in Messenia, a region in the southwestern part of the Peloponnese. Originally it was a fortified city that encompasses the whole area of Cape Methoni with a tower.

A few words about the history of Methoni

In ancient times, there was a city with a harbour called Pedasus. Homer mentioned it as one of the cities that Agamemnon offered to Achilles. Pausanias, a Greek traveller and geographer, noted that it was named after the daughter of the king Oineas or after the rocky islet.

Methoni was a part of the Byzantine Empire until 1204 when it was captured by Venetians. They fortified the castle in 1209, and Methoni became a significant trading centre since it was located on a route between the East and Venice.

But in 1500, Methoni fell under the rule of Sultan Bayezid II. For a short period, the Venetians retook it in 1685, but the Ottomans captured it in 1715. They ruled the Peloponesse and it was a base for the Egyptian Ibrahim Pasha until the early 19th century, i.e. until the Greek War of Independence. 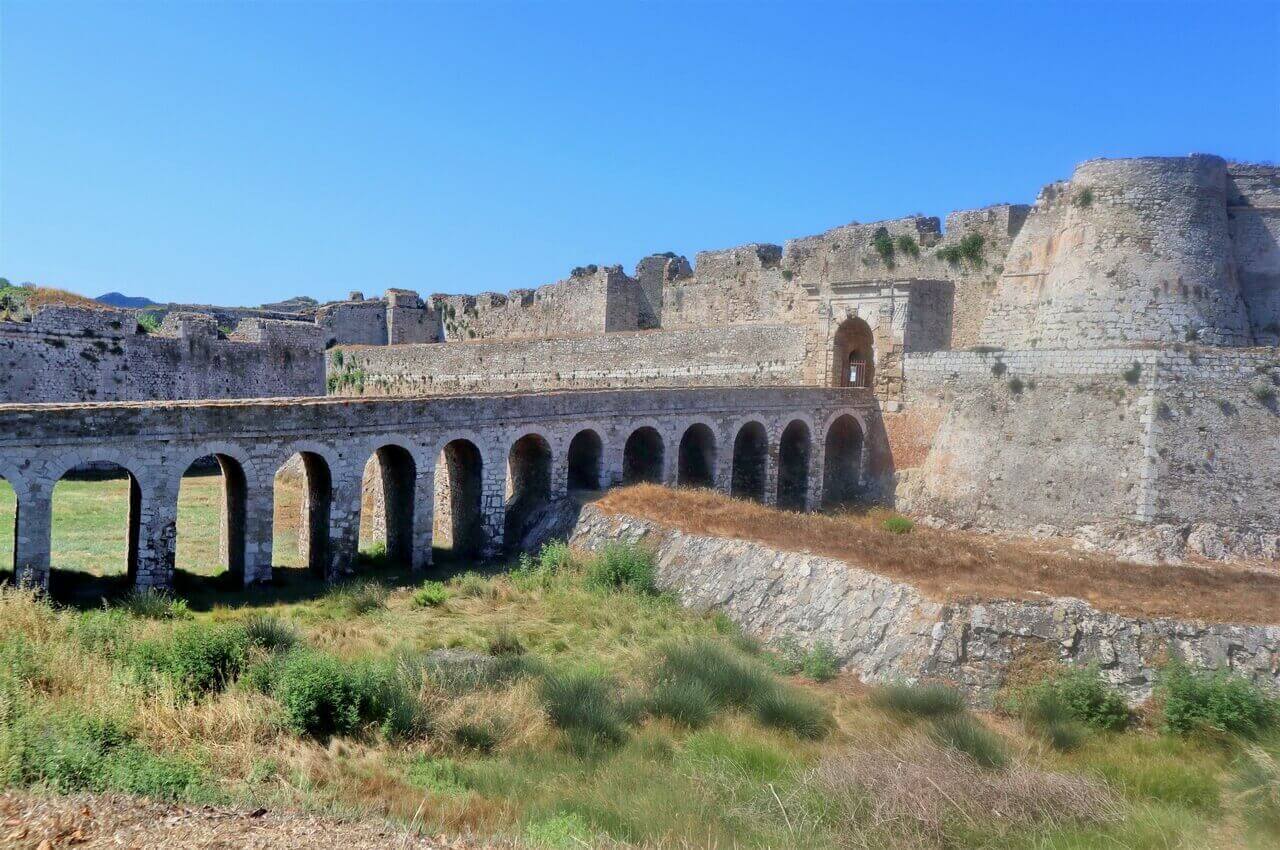 Methoni was liberated by the French in 1828 when Greece got the recognition of its autonomy from the Ottoman Empire by the Great Powers (Britain, France, and Russia). Finally, in 1833, the castle was given to the new Kingdom of Greece.

What can you see today? 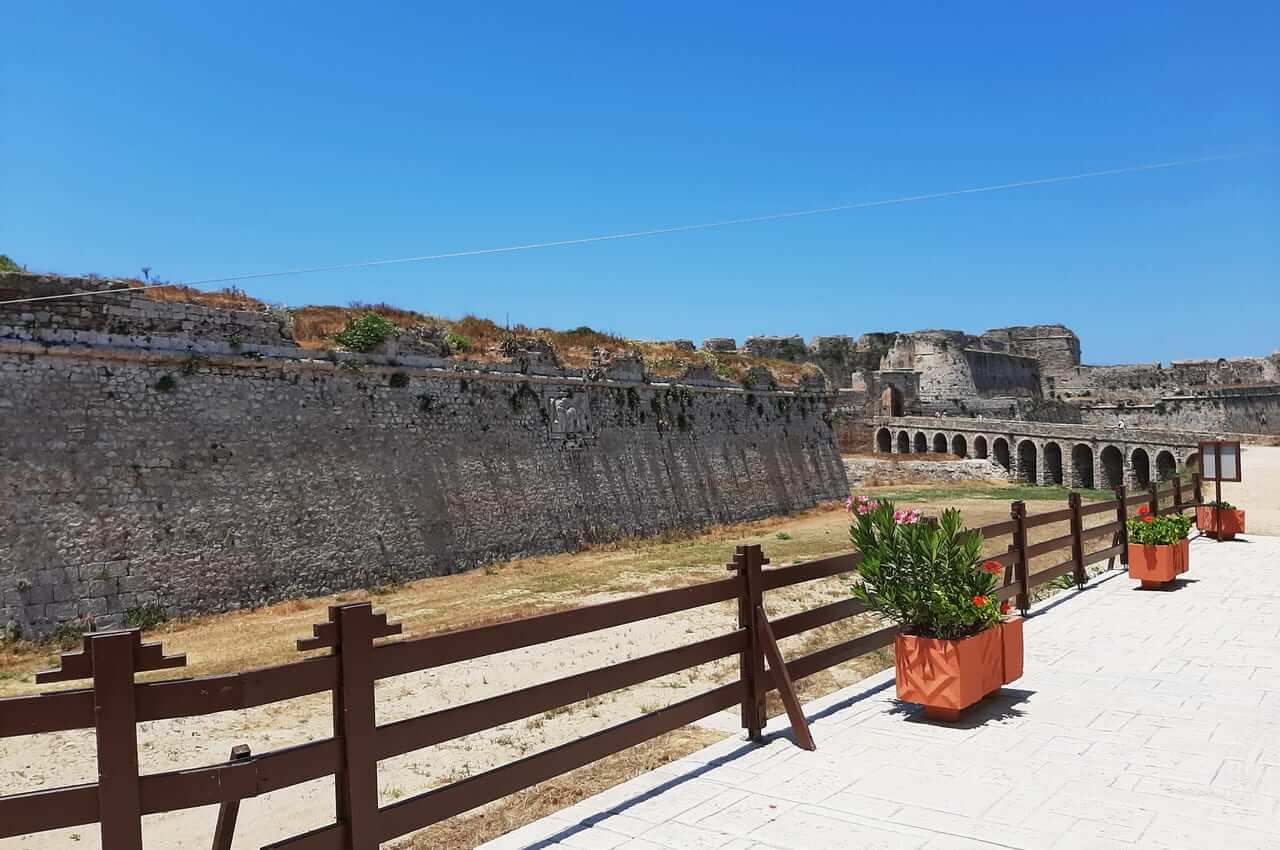 From the land area, it is divided by a deep moat and fortified walls. In the middle of the north side, there is a stone bridge, built by the French in 1829. It has 14 arches, and it replaced the former Venetian wooden bridge. 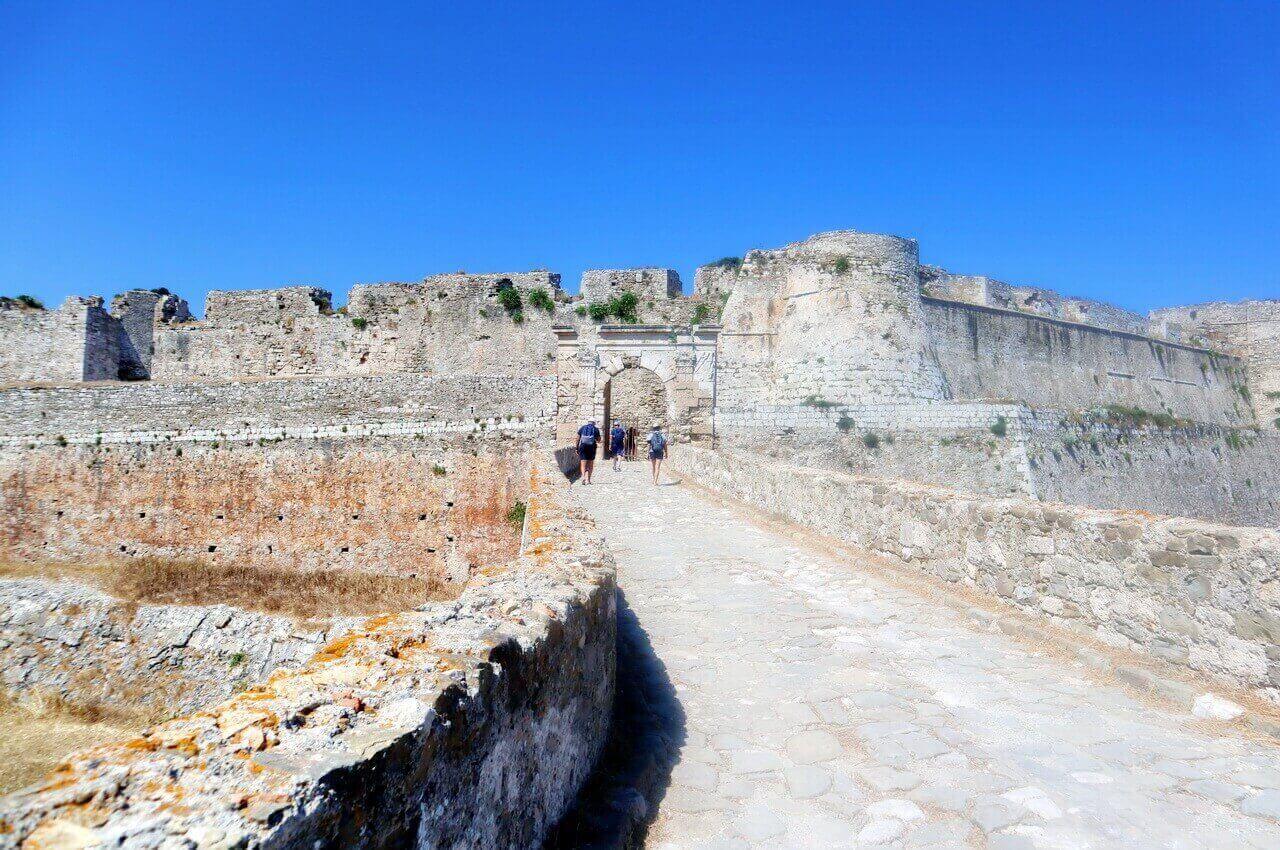 There is a plaque on the wall close to the entrance with a relief of the winged Lion of St. Mark. 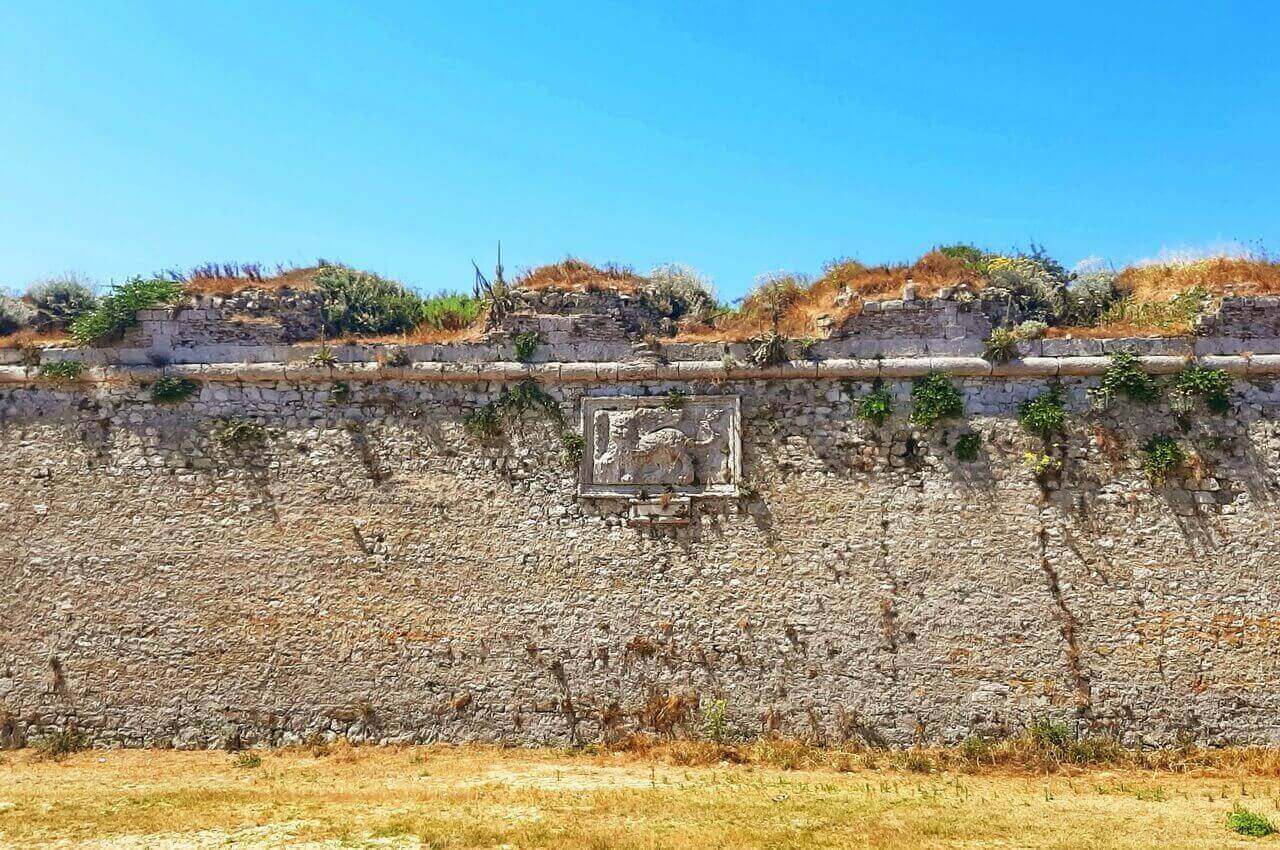 Methoni, fortified wall with the lion of St Marco

The entrance is arched-shaped with Corinthian details. 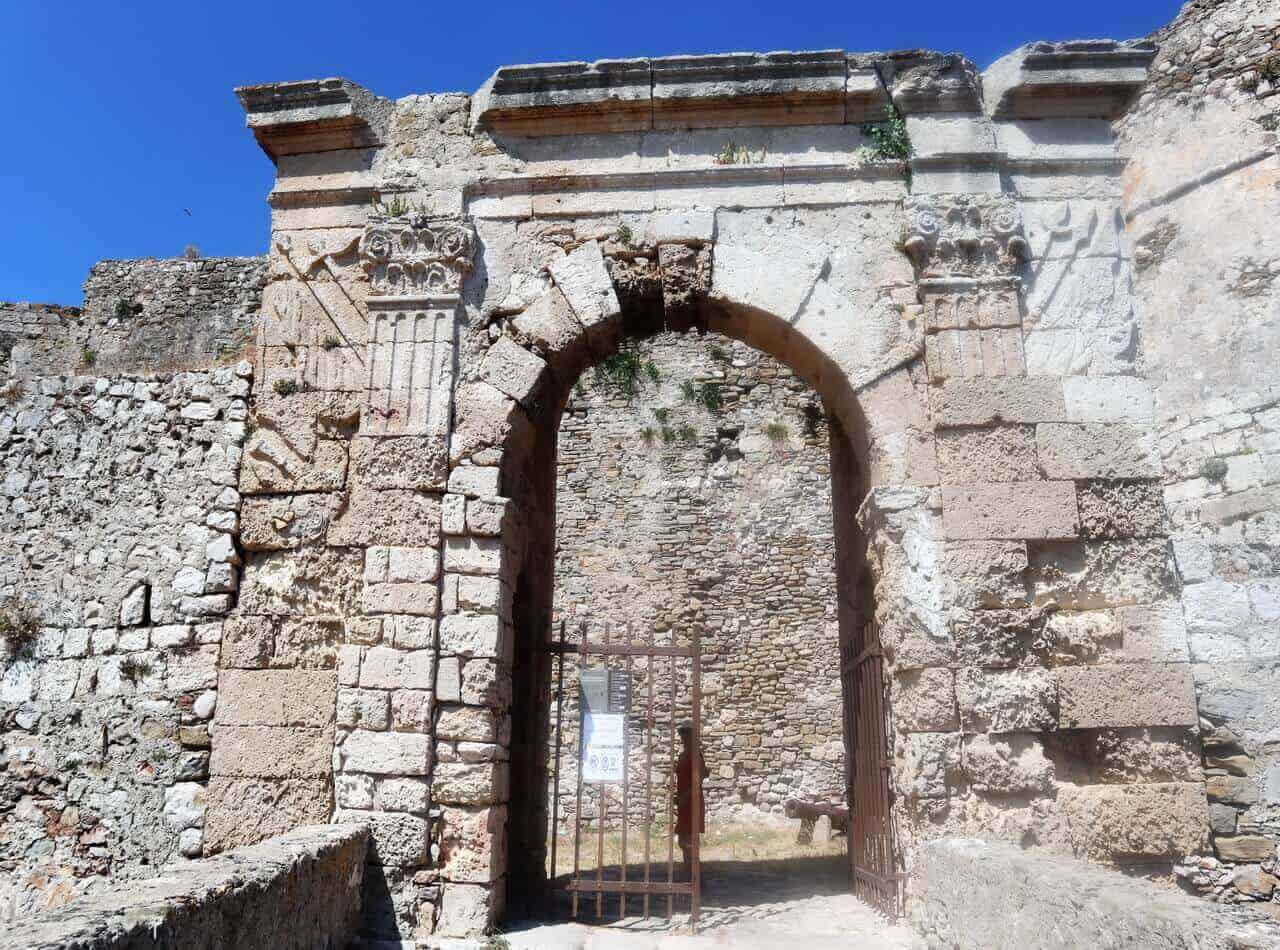 Entrance gate of the Methoni Castle

When you pass the main entrance, there is a path and two more gates until you come to the castle’s interior. So it is a really big area with ruins of five towers, various walls, and houses from the Venetian and Ottomanian periods. 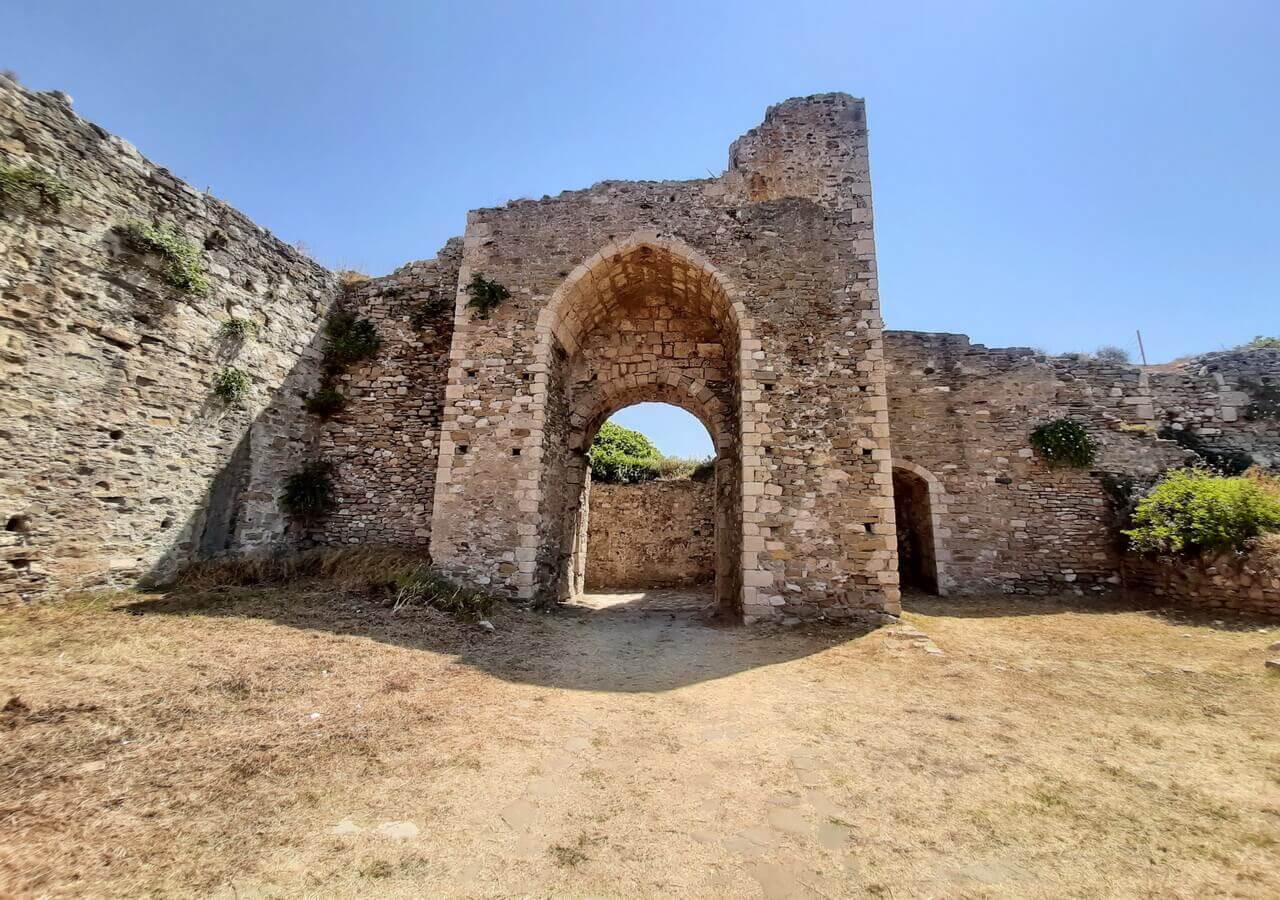 One of the gates in the castle

Once there was „The square of the Arms“ (Piazza grande d’Armi) with narrow paved streets, houses, and the market street. In the middle, there is also one red monolithic granite pillar, 3.67m high. According to the inscription from 1493, it is known as „the Morosini column“, by the Venetian Doge Francesco Morosini. 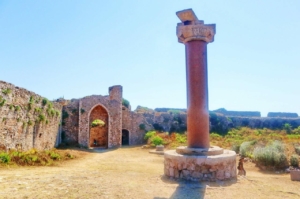 On the left side, there is the Church of Metamorphosis of Sotiros with stone belfry, built during the French rule. 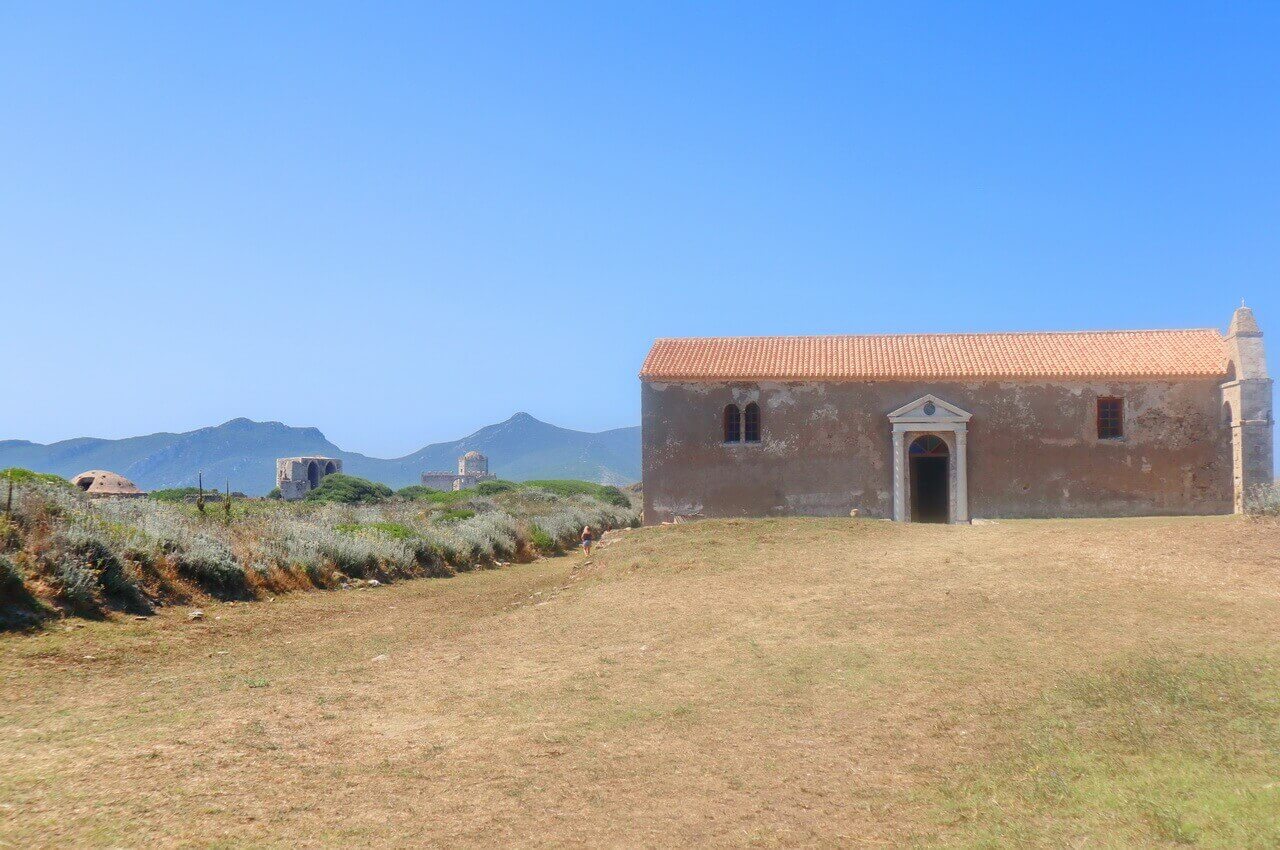 The Church of Metamorfosi Sotiros 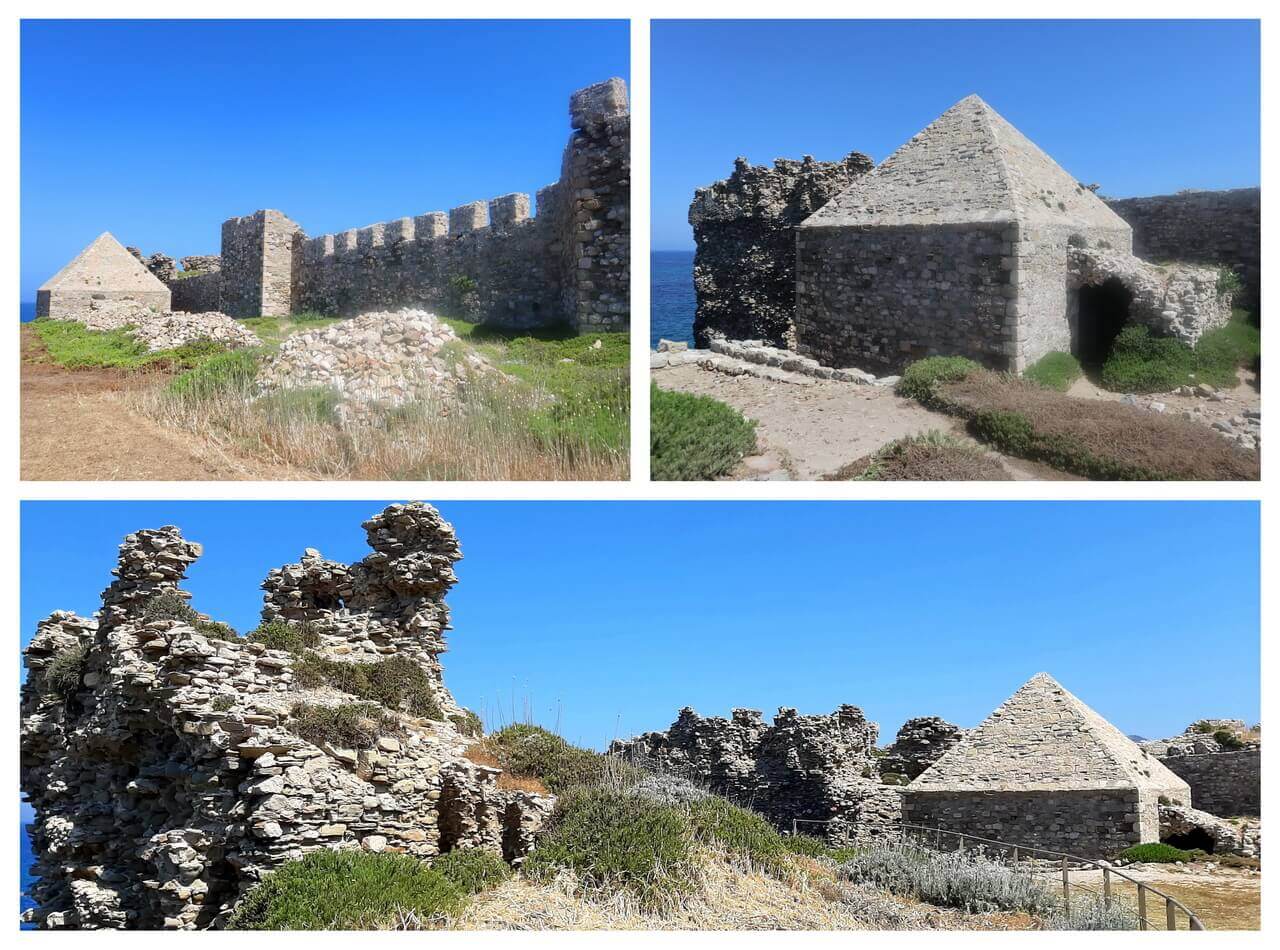 Going further, on the road, you can see the ruins of the Hamam, Turkish baths, built by the Ottomans. 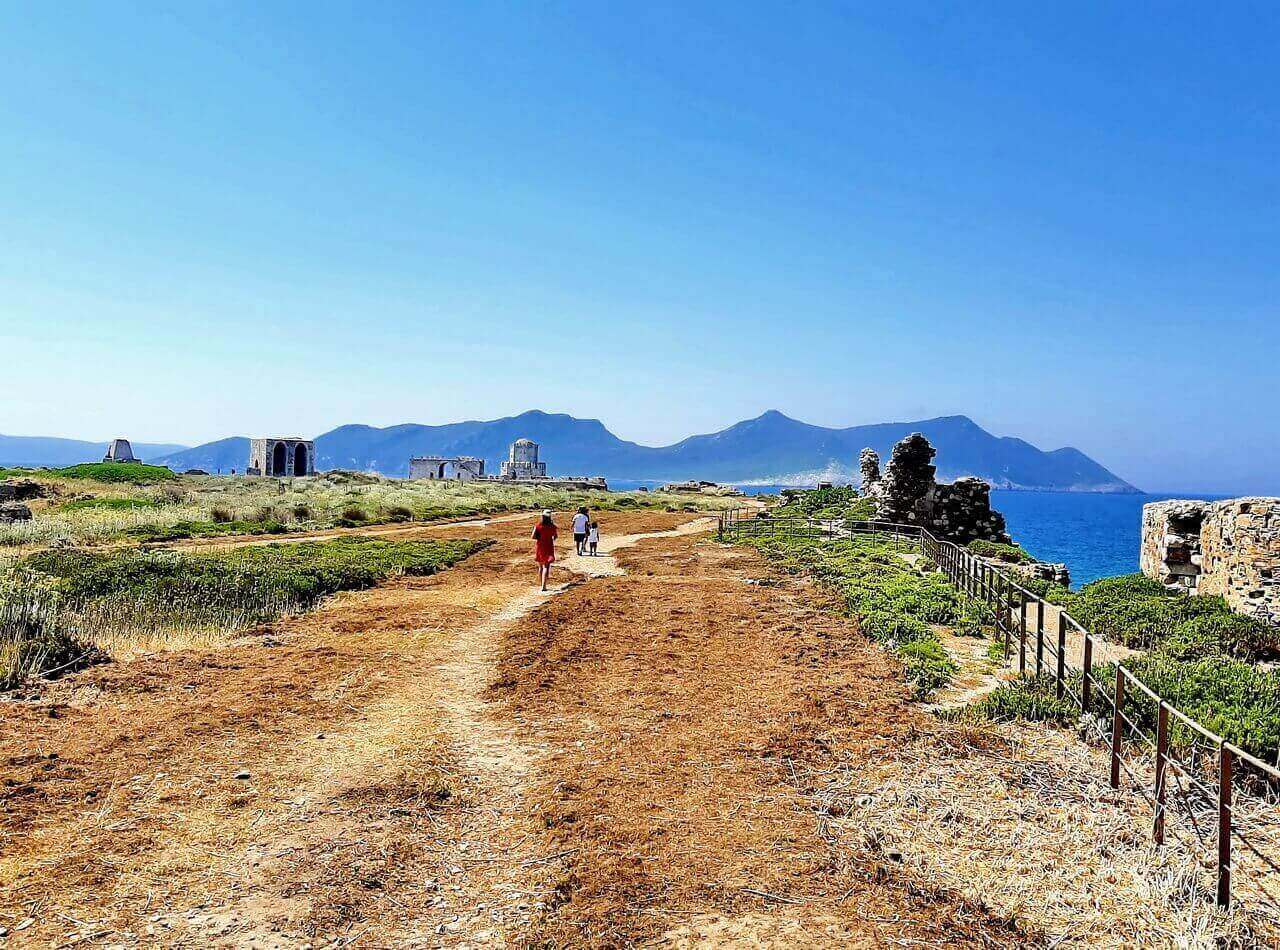 The road and interior of the Methoni castle 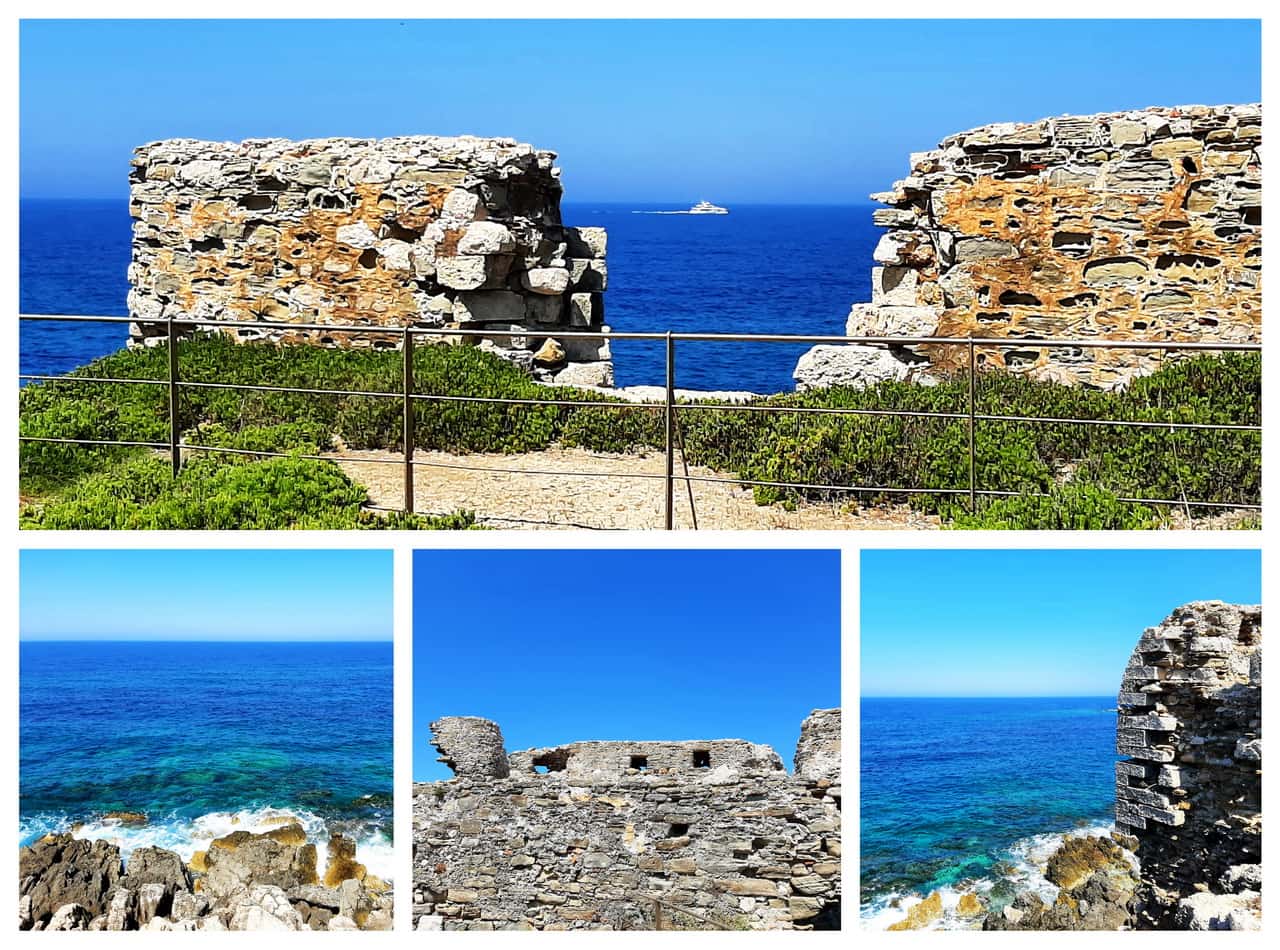 Interesting buildings in the castle

At the end of the road, there are ruins of the former public building with two large, arched windows, and the Sea Gate. 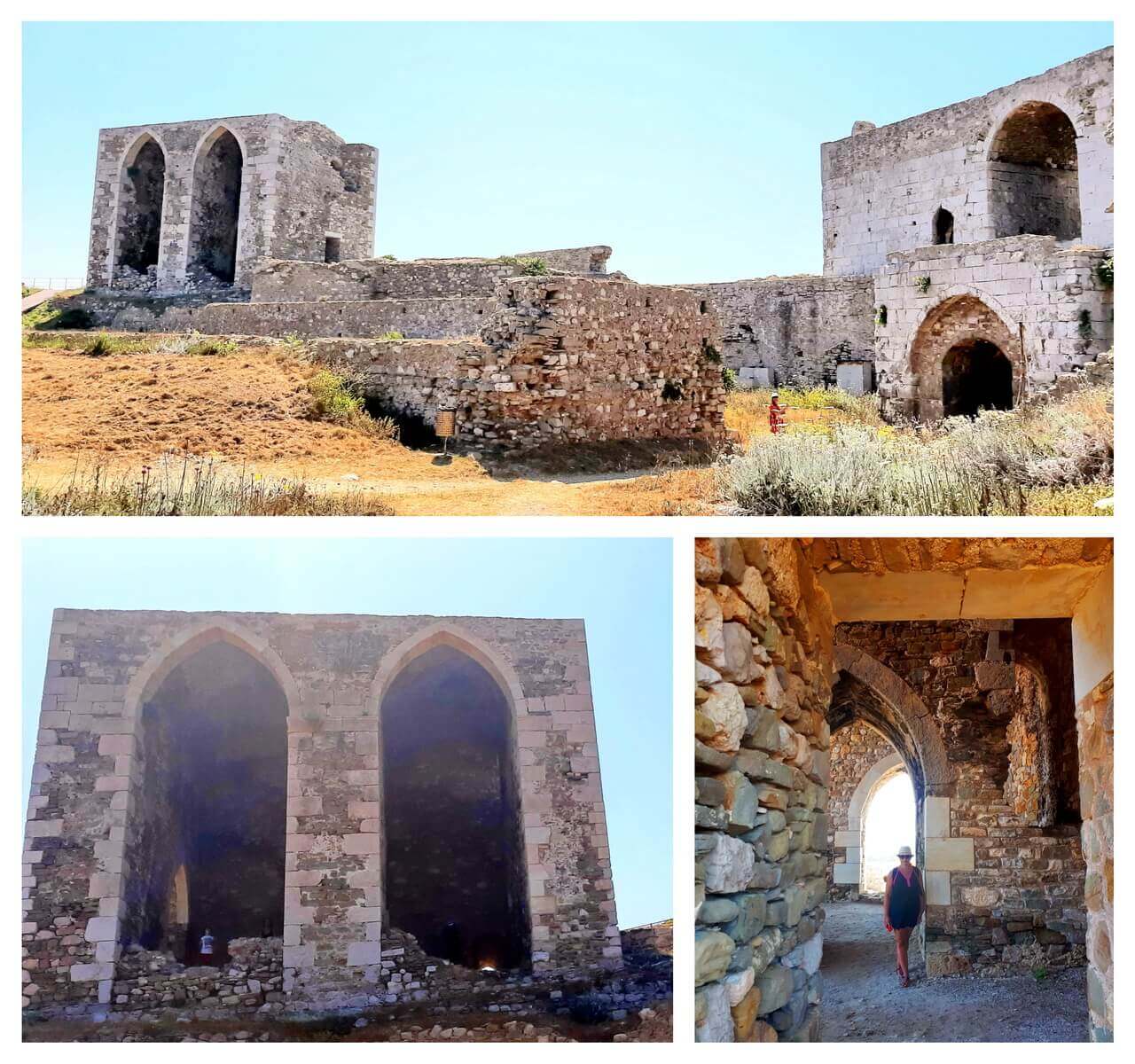 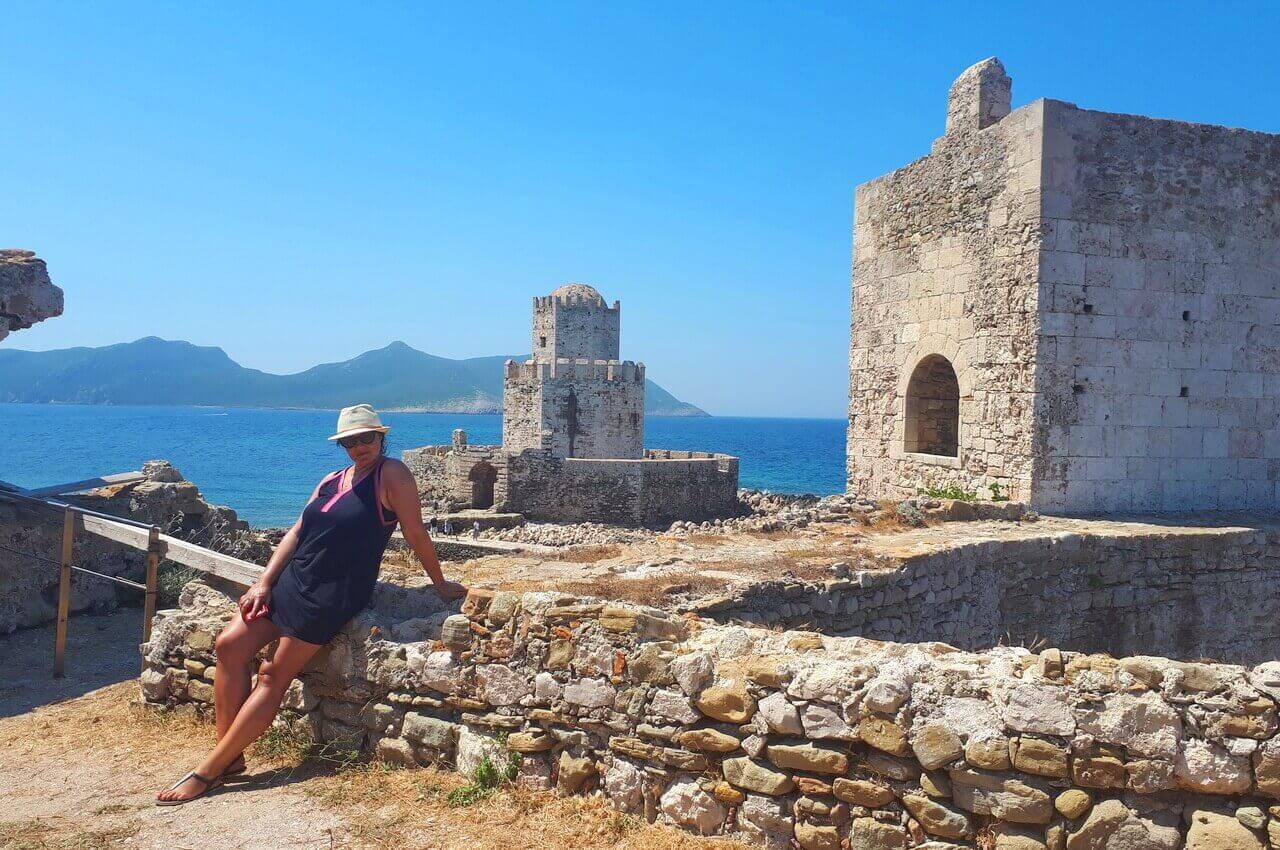 The Sea Gate is recently restored and it looks fascinating. 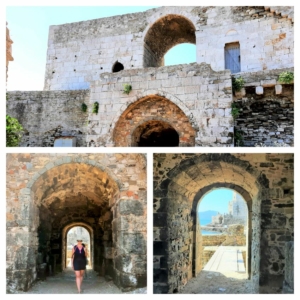 It consists of two towers connected on the top. Passing through an arched passage, we came to the stone causeway, which connects the Sea Gate with the Bourtzi fortress. 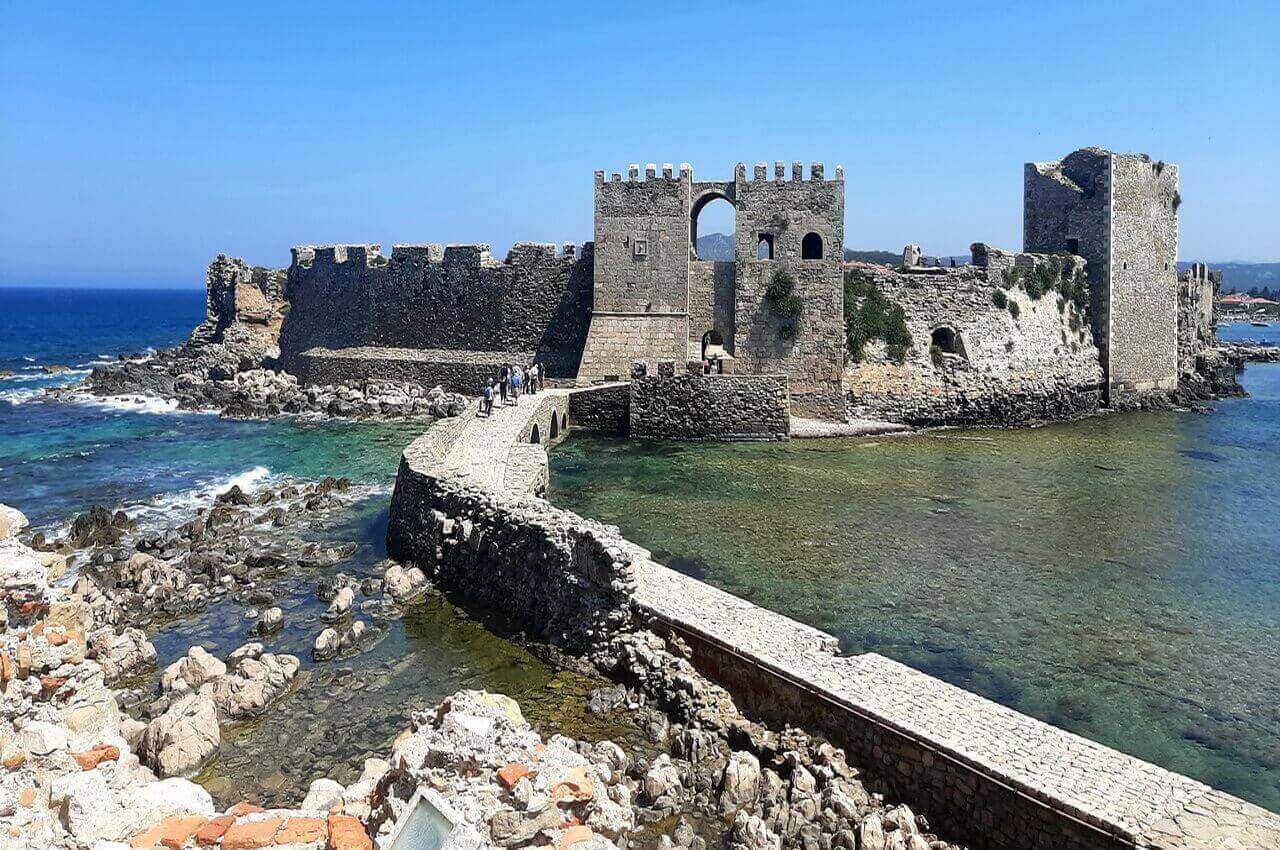 The view of the Sea Gate from the Bourtzi fortress

Bourtzi is a small fortified fortress on an islet rock.
The name „Bourtzi“ derives from the Turk word „burdz“ meaning fort, wall. 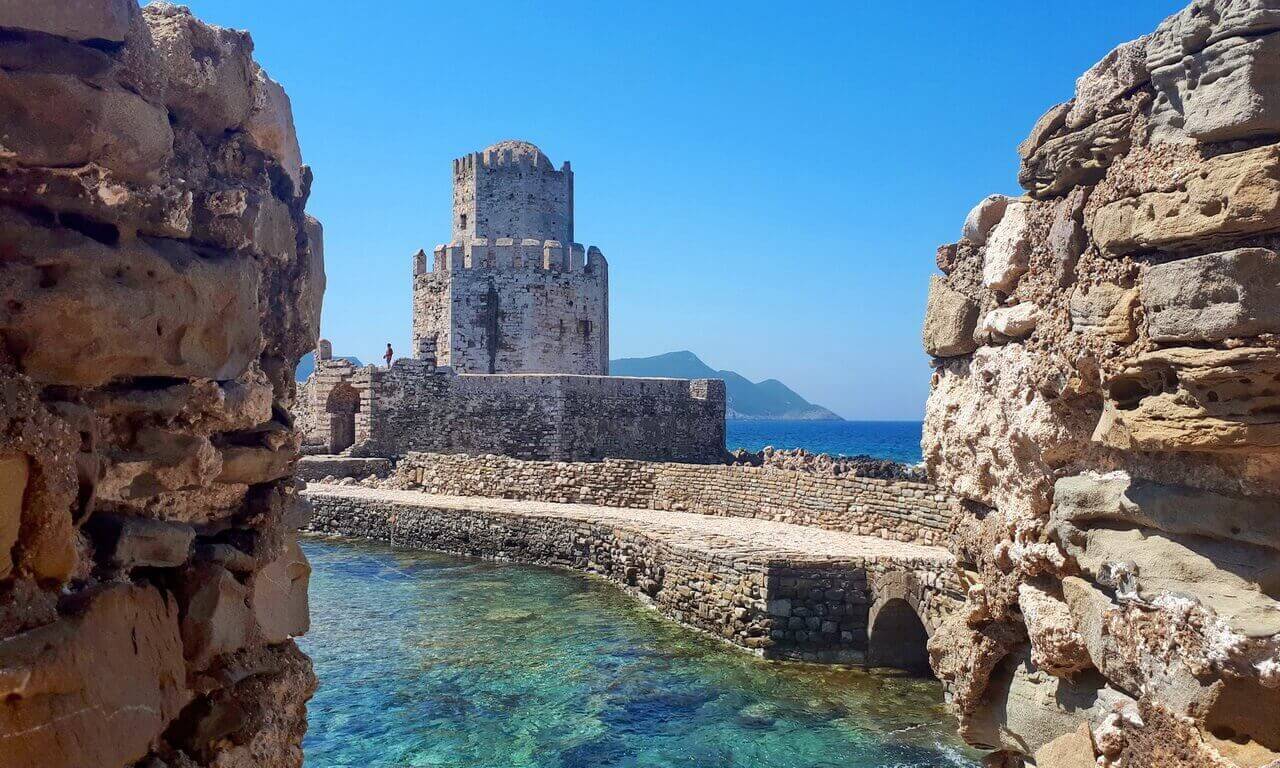 The sea fortress of Bourtzi

This octagonal sea fort is surrounded by the sea. It was used as a harbour, a lighthouse, and even as a prison and place for torture and death of inhabitants and soldiers by Turks. 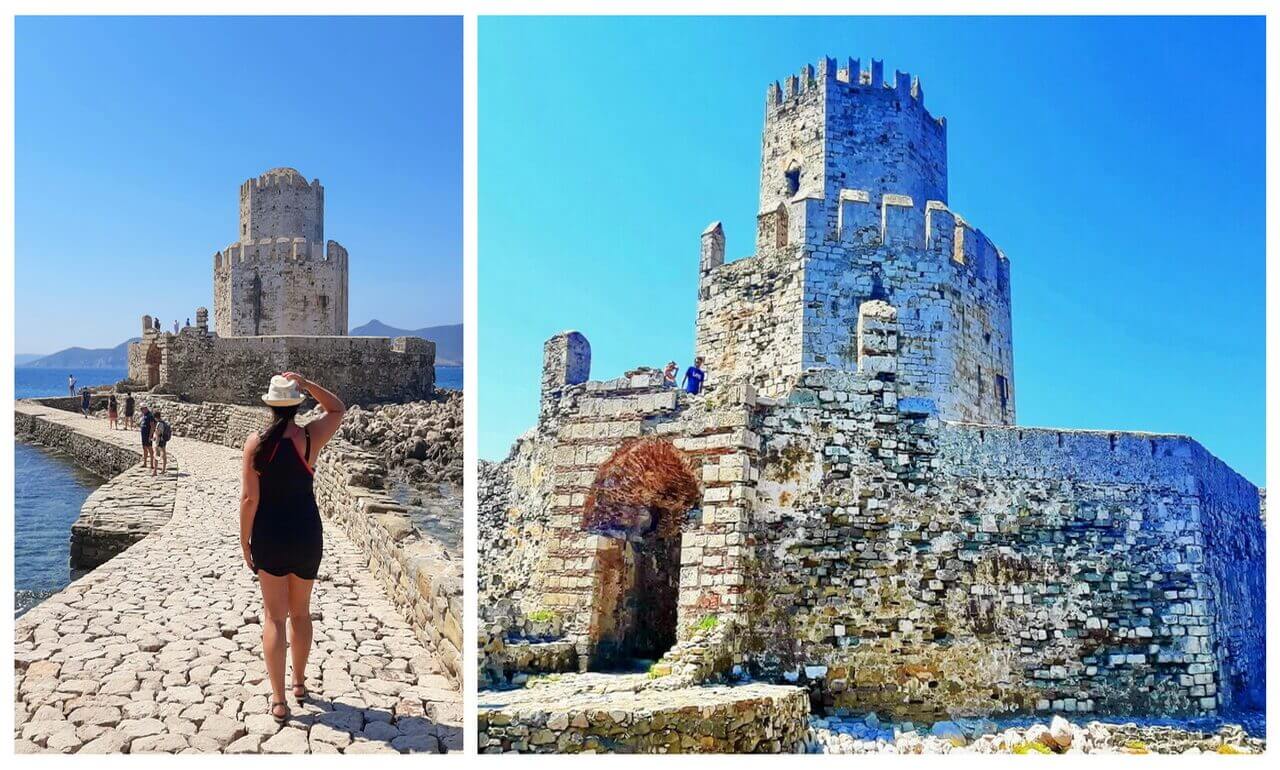 The stone and narrow stairs lead to the first floor which is surrounded by walls and holes for cannons. 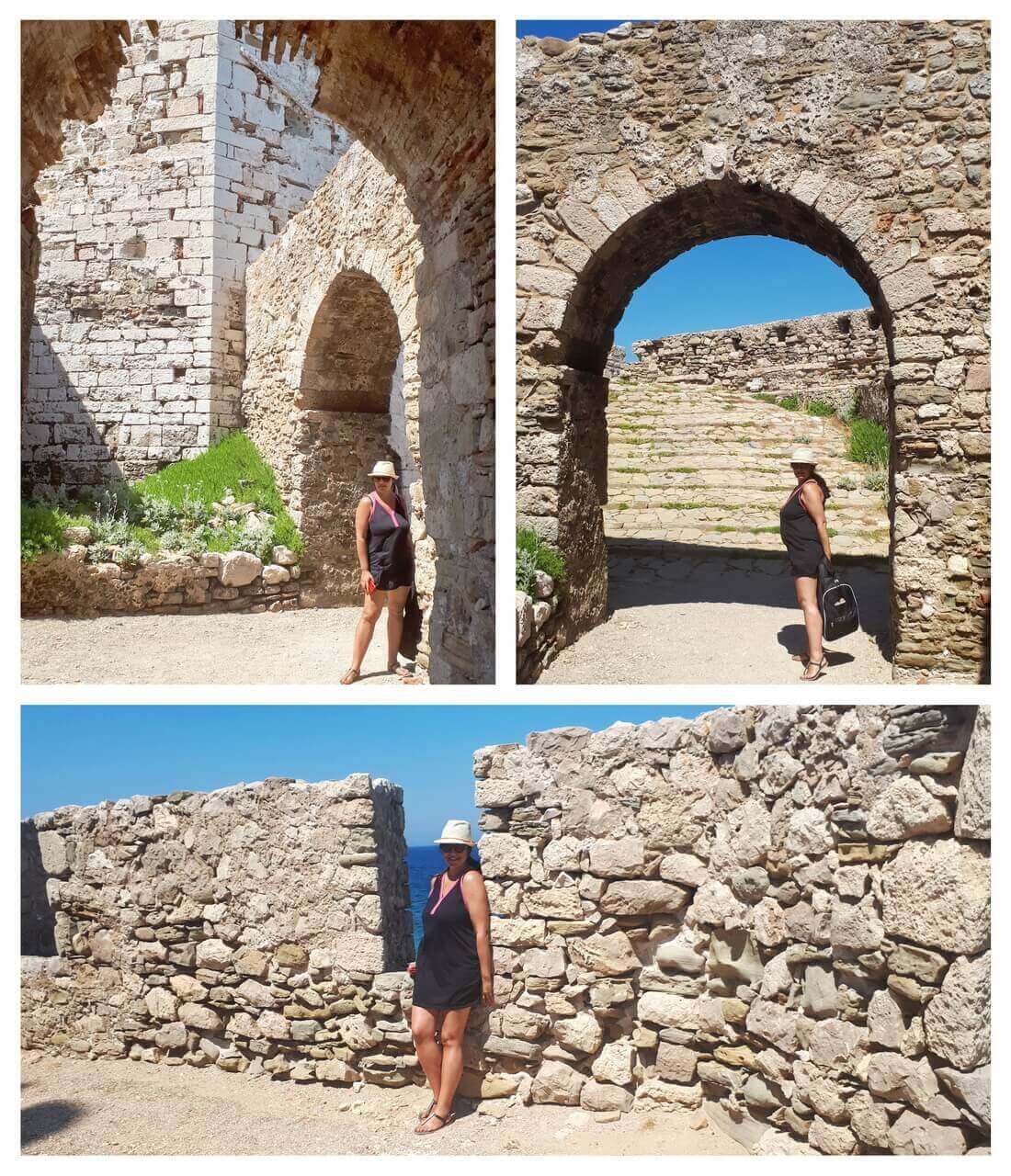 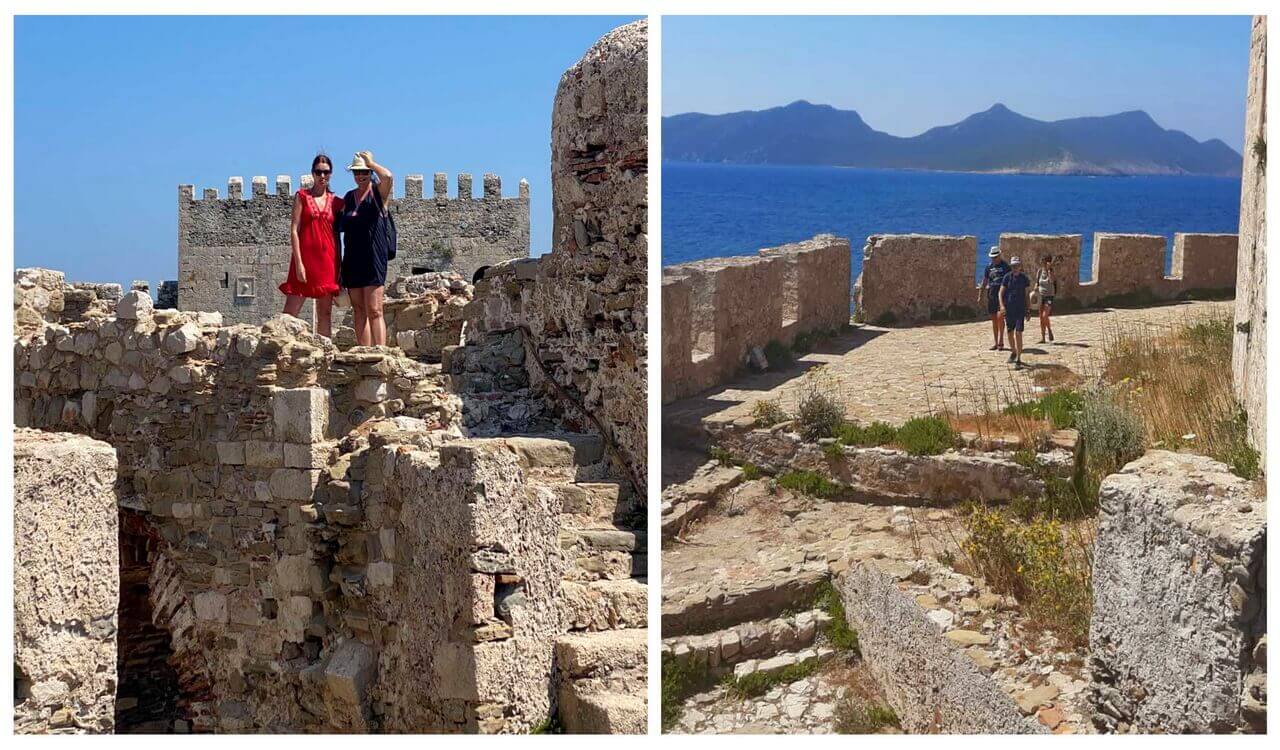 Walking around the Bourtzi fortress

Other narrow stairs lead to the second storey of the tower with a semicircular dome. It is interesting how it looks like since it was built about 1500 by Venetians, and the Ottomans completed it in the 16th century. 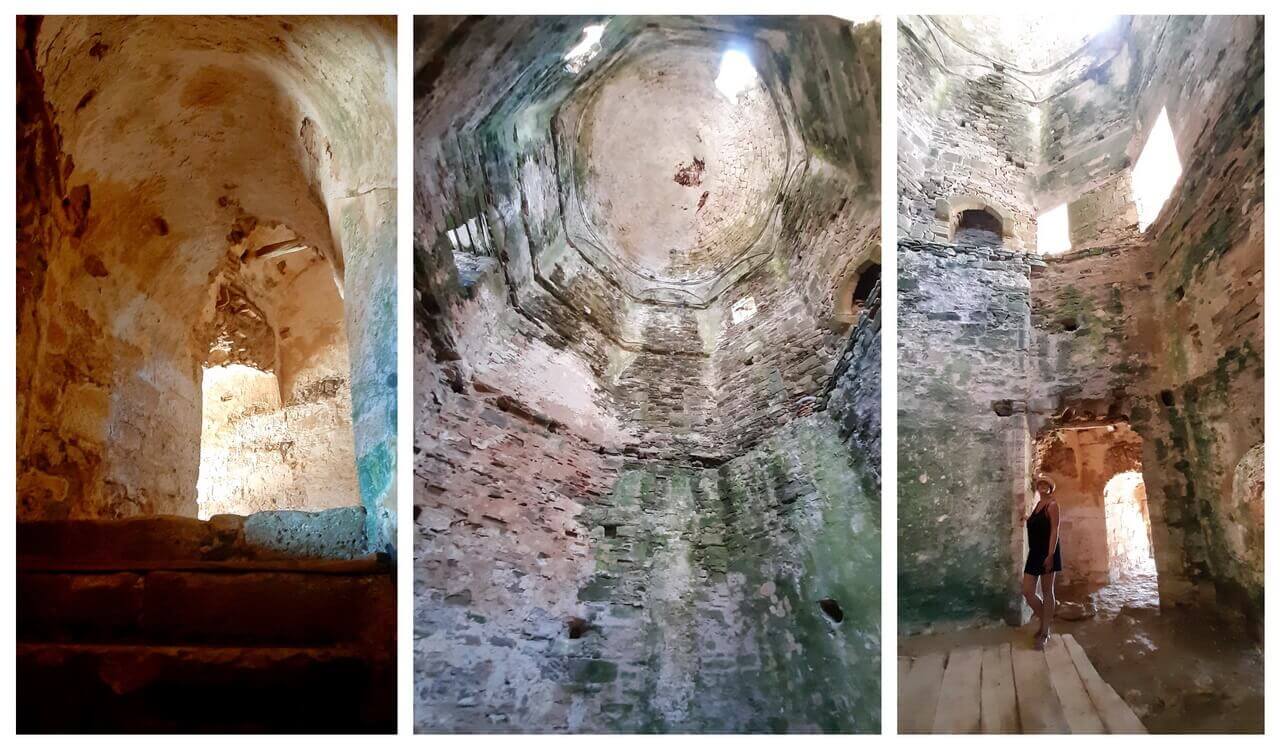 Inside of the Bourtzi tower

The view of the blue sea, the Sea gate and the Bourtzi tower is amazing. Everything looks like one captured moment of the long history, while the fresh and strong wind is blowing across the sea and between the fortified walls… 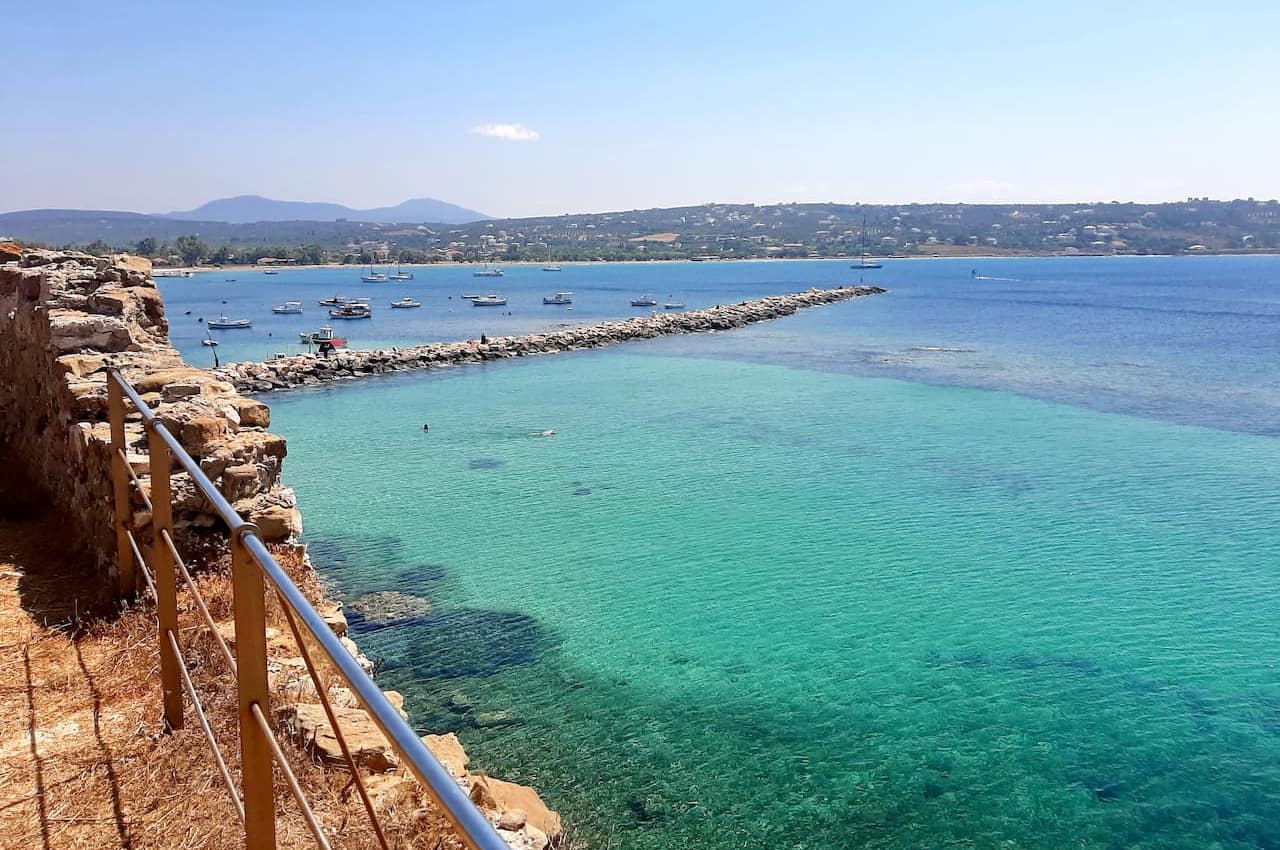 How to get to Methoni Castle

Well, Methoni is located 64 km from Kalamata, the capital and central port of the Messinia region. You can get there by car or by KTEL bus – it takes about 1h 40m. But if you are coming from Athens, it is about 290 km far.

Visiting hours: every day from 8 to 15, except on Mondays and a few holidays. The ticket is 3 euros for adults, and it takes about 1-2 hours to visit the castle.

When you finish visiting the castle, you can go to the sandy beach near the Methoni walls, take a coffee or have lunch in taverns close to the beach. 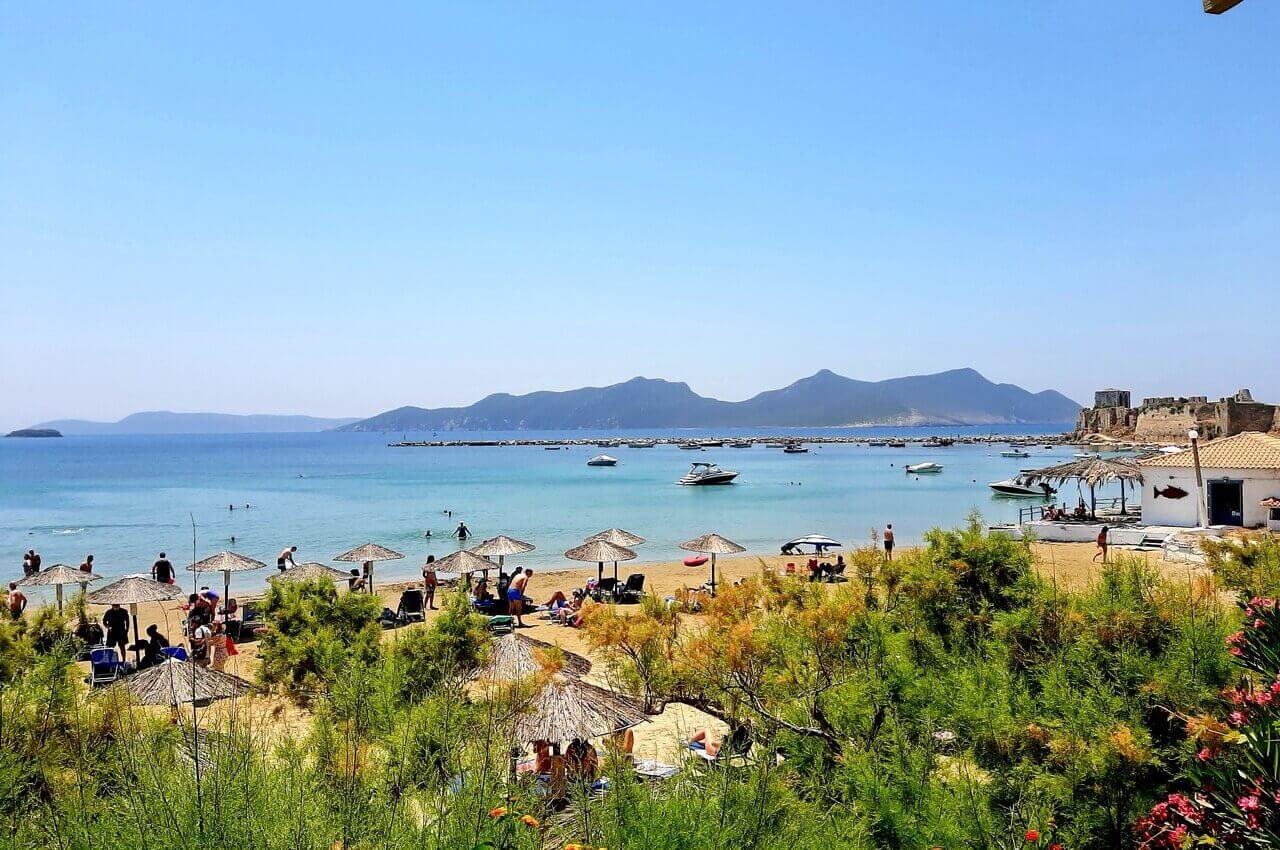 The beach near Methoni Castle

Close to Methoni, you can visit Kalamata or other fascinating fortresses around Pylos town and Navarino bay.
But it is another story, and you can read more about it in the next post on the blog here. 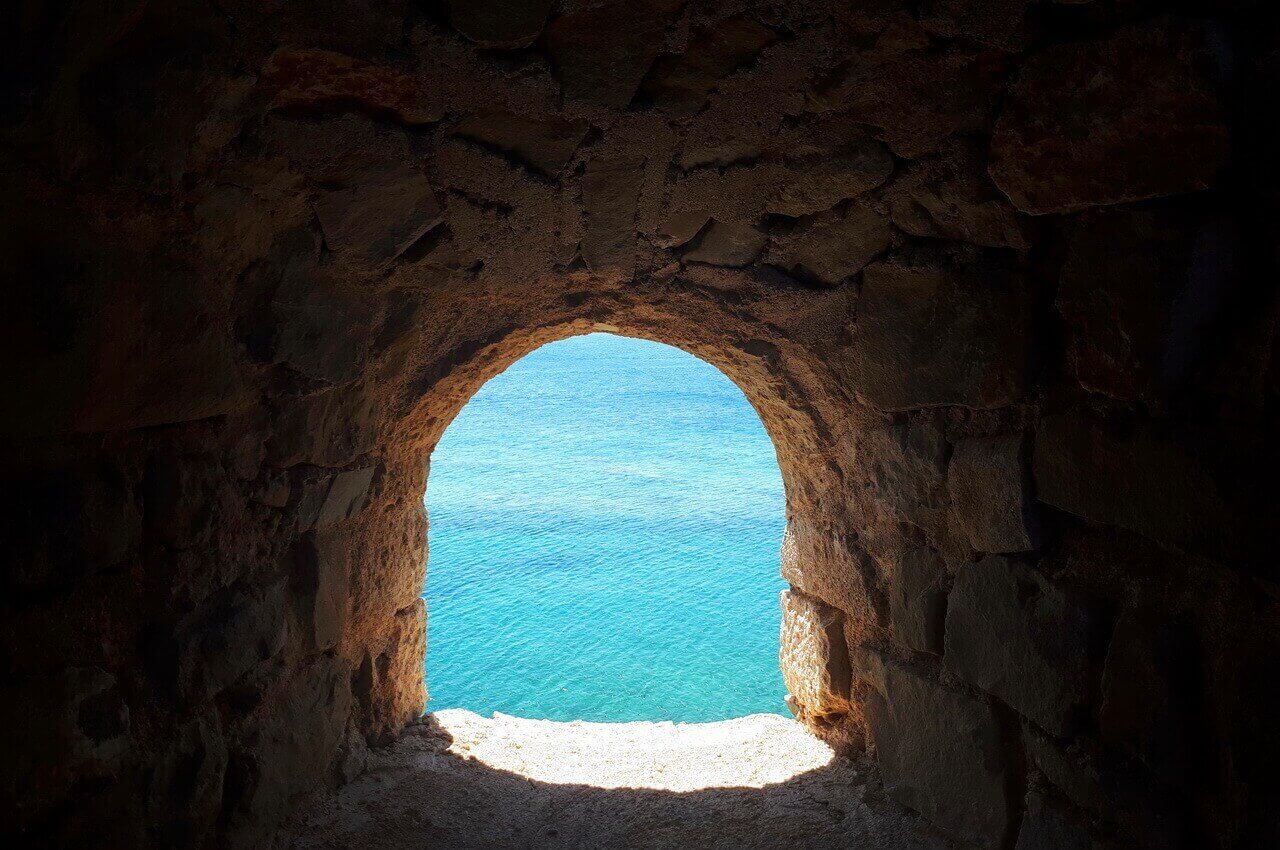 A view from the Bourtzi fortress

So, if you are a fan of ancient history, Methoni Castle will be certainly an interesting place to visit and explore. 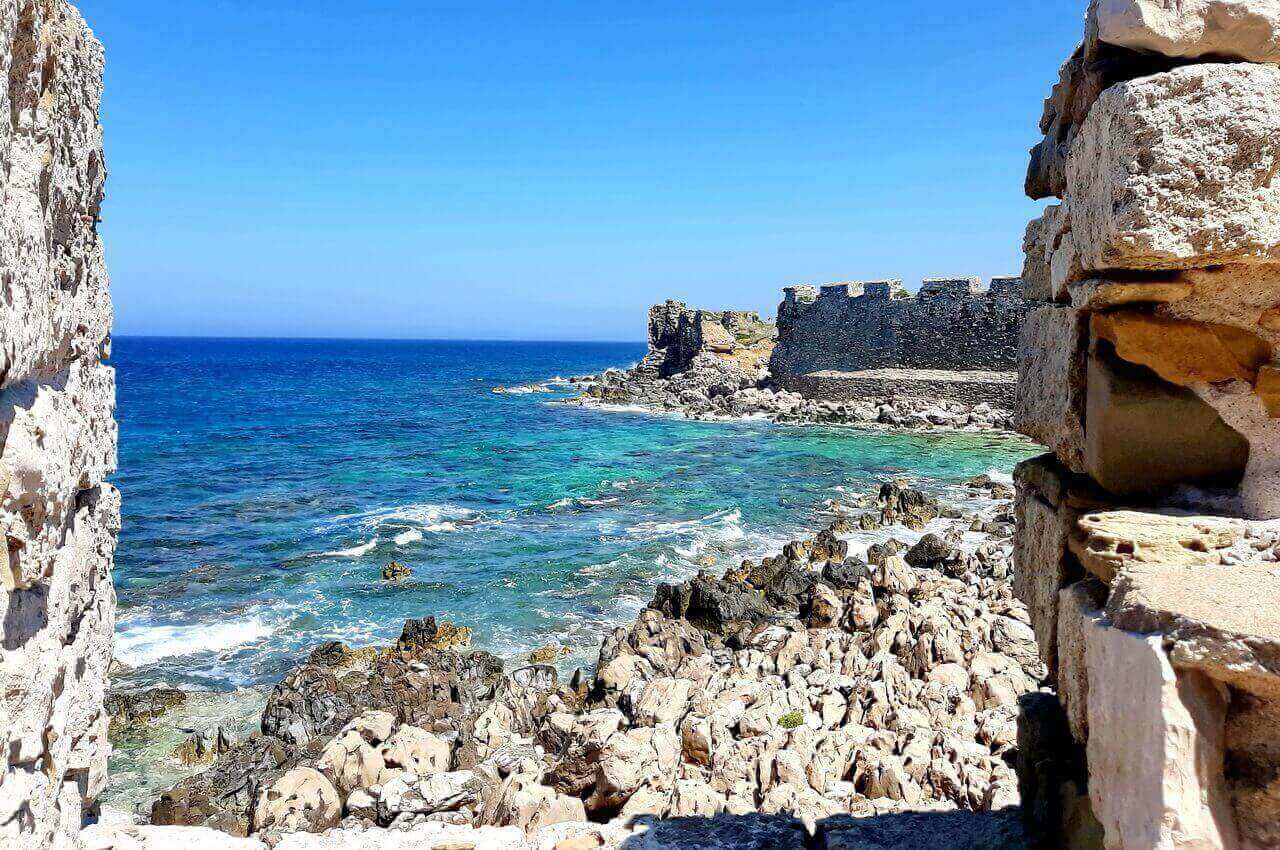