Dambulla town is best known as a Cave temple complex.

It is located in Matale district, in the central part of Sri Lanka, about 70 kilometers north of Kandy town, and 148 kilometers north-east of Colombo town.
The ancient rock fortress Sigiriya is very close, about 17 kilometers. These two sites belong to the cultural triangle of Sri Lanka and you can visit both in one day if you have limited time.

Dambulla caves temple was inscribed in the UNESCO World Heritage list in 1991, and it became one of the most famous tourist attractions in Sri Lanka.

Dambulla caves are the largest cave temple complex in Sri Lanka. It is the Buddhist temple from the 1st century BC, carved in the huge and 160 meters high rock.

There are more than 80 caves in this area. But the most important are five caves with 153 Buddha statues, 3 statues of Sri Lankan kings and 4 statues of god and goddess, as well as different paintings and murals.

It is believed that the king Valagamba found refuge in these caves in the 1st century BC. Five months after becoming king of the Anuradhapura Kingdom of  Sri Lanka, he was overthrown by a rebellion. When he regained his throne after fifteen years, he helped the monks and made the caves into a fantastic rock temple, as a sign of gratitude. After his death, the next kings continued to paint and decorate the caves. The cave complex was repaired and repainted several times in the 11th, 12th, and 18th centuries as well.

And today the Dambulla monastery is still active.
Here you can see the young and old monks who perform their daily rituals.

The path to the Dambulla cave temple

So, when you climb to the top, first, you need to take off your shoes before you enter the caves. There is “shoe take care service” in front of the complex and it costs only 25 LKR (0,15$). Well, it is one of the most sacred Buddhist places, so please respect it.

And when you finally enter the Dambulla complex, you find an unusual view.
In front of you, there is a huge rock, white painted colonnades, and a corridor, leading to the main five caves.

In the courtyard, in front of the caves, there is a large and old Bodhi tree. After the darkness, hot and humid air in the caves, the fresh air, and Bodhi tree are perfect to relax a little bit. And of course, a little monkey is there.

The bodhi tree and the monkey in Dambulla courtyard

As I have already mentioned, the five caves are the most important in Dambulla cave complex.

The first cave: Deva Raja Viharaya or „The Cave of the Divine King“

The first cave is very small, with the 14-meter long statue of Buddha. It shows Buddha in the Parinirvana status (the last moments), in the lying position, with a hand under the head.

The Buddha statue was carved out of one granite rock.
His feet are colored in red, white and golden flower motifs.

In the corner, at his feet, there is the statue of his loyal pupil Ananda and statue of Vishnu, one of the principal gods in Hinduism. This cave was repainted many times because it sustained a lot of damage.

The second cave: Maha Raja Viharaya or “The Cave of the Great Kings” 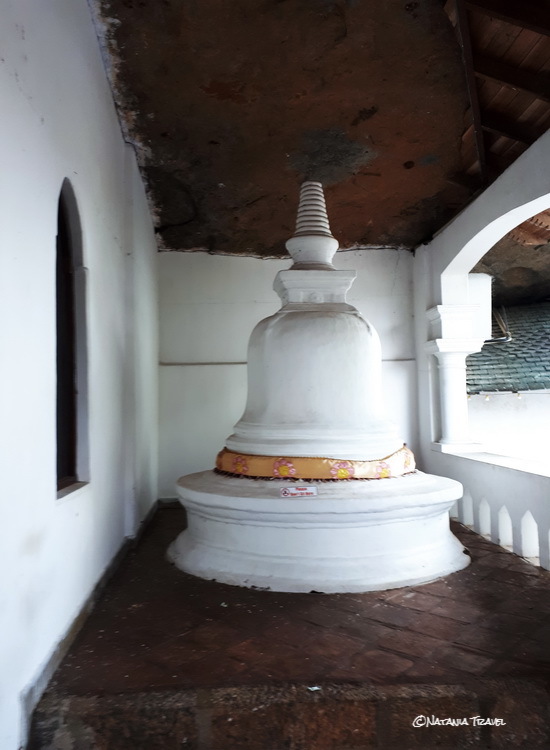 The stupa in the passage of Dambulla cave 2

It is the biggest and the most attractive cave in the complex, about 50 meters wide and seven meters high. This cave is known as “The cave of the Kings” because here you can see the statue of two kings.

One is a wooden statue of the king Valagamba (known as Vattagamani Abhaya as well), who honored the monastery in the 1st century BC.

A statue of the King Valagamba in Dambulla cave 2

The second statue is the statue of the King Nissanka Malla (1198-1206 AD), one of the rulers in the Polonnaruwa kingdom. He gilded the caves and added about 50 Buddha statues in the 12th century. Because of the gold, the temple got the name Ran Giri, which means the Golden rock.

Dambulla cave 2, a statue of the king Nissanka Malla and Buddha statues

In this cave, you can also see the reclining Buddha statue.

The whole cave including the ceiling is painted in vibrant colors and murals of Buddha images.
And it looks really amazing despite the darkness inside.
Here you can see 56 Buddha statues in different positions and life moments.

There is also one stupa with the circular pedestal with a few figures of the seated Buddha.

Here you can see the big standing gilded Buddha statue.
The Dragon Arch (Makara Torana) was constructed above his head.

A water vessel in the second cave

In the second cave-shrine, there is something very interesting: it is a water vessel. Water flows in the opposite direction, from the floor to the ceiling. From the top water drops into the small pool and vessel. It is considered a miracle and used only for sacred purposes. Also, it is believed that it will never dry up.

The third cave is also painted in vibrant and rich colors.

The frescoes represent the history and some life moments of Buddha. It was constructed during the rule of the king Kiti Sri Rajasinha (1747–1782), in the Kandyan period. There are 50 statues of Buddha and the statue of the king Kiti in this cave as well.

Also, there is one big reclining Buddha statue, with his head on a pillow.
Here you can see the seated Buddha statue with Dragon Arch (Makara Torana) above his head and shoulders.

Cave 4: Paschima Viharaya or” The Cave of Western Temple”

The fourth cave is called the Western Temple. Here you can see the Buddha statues in the meditation pose.

There is one Buddha statue in the sitting position, under a dragon archway as well.

In the center is a small dagoba, with a crack on one side, made by the thieves who broke in. They believed that the dagoba contained the jewelry of Vattagamini Abhaya’s wife.

The ceiling is also painted in vibrant colors, and some of them were repainted in the early 19th century.

Dambulla, the ceiling in the cave 4

This cave is the “youngest” of all the caves and it was the former storehouse.
Here the statues were built of brick and plaster, while others were made of granite rock.

In this cave, you can see one reclining Buddha statue, about 10 meters long, and several standing and seated Buddha statues.

Little monkey on the roof, the entrance of  Dambulla cave 1

After visiting Dambulla caves, you can take another way to come down. These stairs are a little bit wider and it is easier to walk down to the bottom of the rock. Little monkeys are everywhere around you. So take care of your belongings.

From the top, there is a fantastic panoramic view of the surrounding forest and nature.

The stairs to the bottom of Dambulla temple

There you can find a modern building with a gold-color Buddha statue, about 30 meters high.
In this building, there is the Golden temple Buddhist museum, and you enter in it through the open lion’s mouth 🙂

Next to the museum, there is a line of the Buddhist priest statues, dressed in orange.

The Golden Temple museum with statues of the Buddhist priest, Dambulla

In the courtyard, there is also a beautiful golden colored bell-shaped pagoda.

The tickets and visiting time in Dambulla Caves

For tourists, the single ticket costs 1.500 LKR, it is about $10. You can buy it in a ticket office at the bottom of the hill. The Dambulla caves are open from 7 AM to 7 PM.
It is always good to take a local guide who will tell you the story about the history of the temple. A visit to Dambulla caves takes approx. 1 to 1.5 hours.

How to reach Dambulla?

Generally, it depends on the location of your accommodation.
The best way to visit Dambulla is an organized tour.

Well, Dambulla is the largest cave temple in Sri Lanka. Also, it is the best-preserved temple considering that the first Buddha images were created over 2000 years ago.

For tourists, it is a little bit unusual place because everywhere around you, you can see Buddha’s statues in different sizes and positions. So Buddha is standing, Buddha is lying or Buddha is seating in the five caves decorated with murals and paintings which covers about 2,000 square meters.

And for the Buddhists, Dambulla is one of the most sacred Temples. It is the pilgrimage site where pilgrims can feel the connection with their spiritual teacher, Buddha.

Whether you are a tourist, monk or pilgrim, you will be amazed by the fantastic colorful murals and images on the walls and Buddha’s statues in Dambulla cave temple.

www.nataniatravel.com Sigiriya, rock fortress in the middle of the jungle in Sri Lanka

Beach time 🏖 🍹 Do you recognize your favori

The power of the waves in the Indian ocean... #ind

Pinnawala is the elephant orphanage, located in Sr

Traveling is an integral part of our lives. Someti

Tunnel of Eupalinos is located on Greeg Samos isla

Žiča is the Serbian monastery from the begining

When the sun goes down... #sunset #sunsets #kouffo