Burano is one of the islands in the Venetian lagoon, in northern Italy. It is a perfect place if you want to run away a little from the beautiful but usually very crowded Venice, known as “The Queen of the Adriatic“.

The best periods to visit the island are in spring and summer, because of the weather and absence of fog.
We visited the island in August. It was a cloudy and hot day, but despite the clouds, the view of the tiny houses painted in different colours was stunning!

And we didn’t know where to look and what to photograph first! 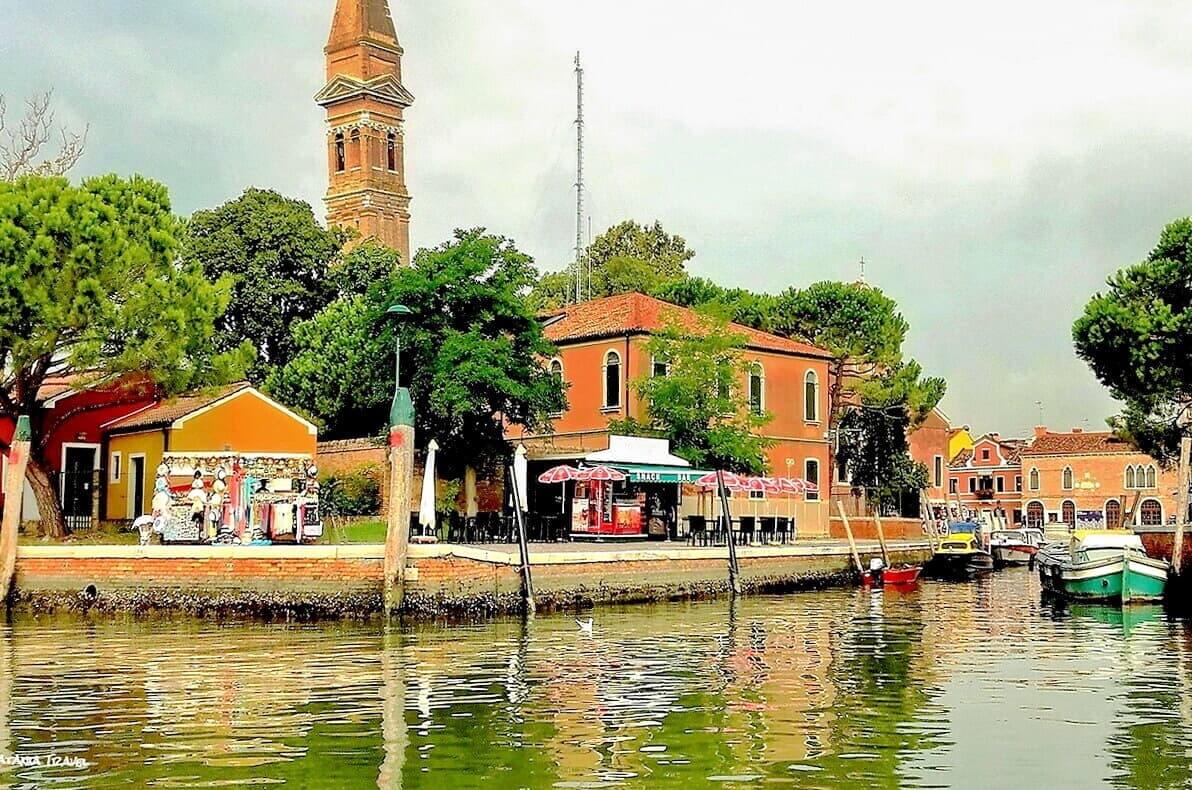 The settlement of Burano was founded in the 6th century by some inhabitants of the Roman city of Altino, during the Barbarian invasions. There are a few stories about its name. One is that Altino inhabitants named it ”Burano” from “Porta Boreana” because it is located on the northeast, the direction from which the wind blows. Another story says that it was initially founded by the Buriana family. And there is a story that first inhabitants came from the small island of Buranello, about 8 kilometres (5 miles) to the south, as well.

The first houses were made of cane and mud and then of bricks, around 1000 A.D. After that Burano lost its autonomy and became a part of the Republic of Venice. The people were engaged in fishing and agriculture. In the 16th century, lace was produced until the late 18th century, when the industry died out. This period is known as the “golden age” of Burano history.

Today, about 2800 inhabitants live on the island. Burano administratively belongs to Venice, together with the other islands in the Venetian lagoon.

The colourful houses of Burano Island

As you approach the island, from the boat you can see small colourful houses. 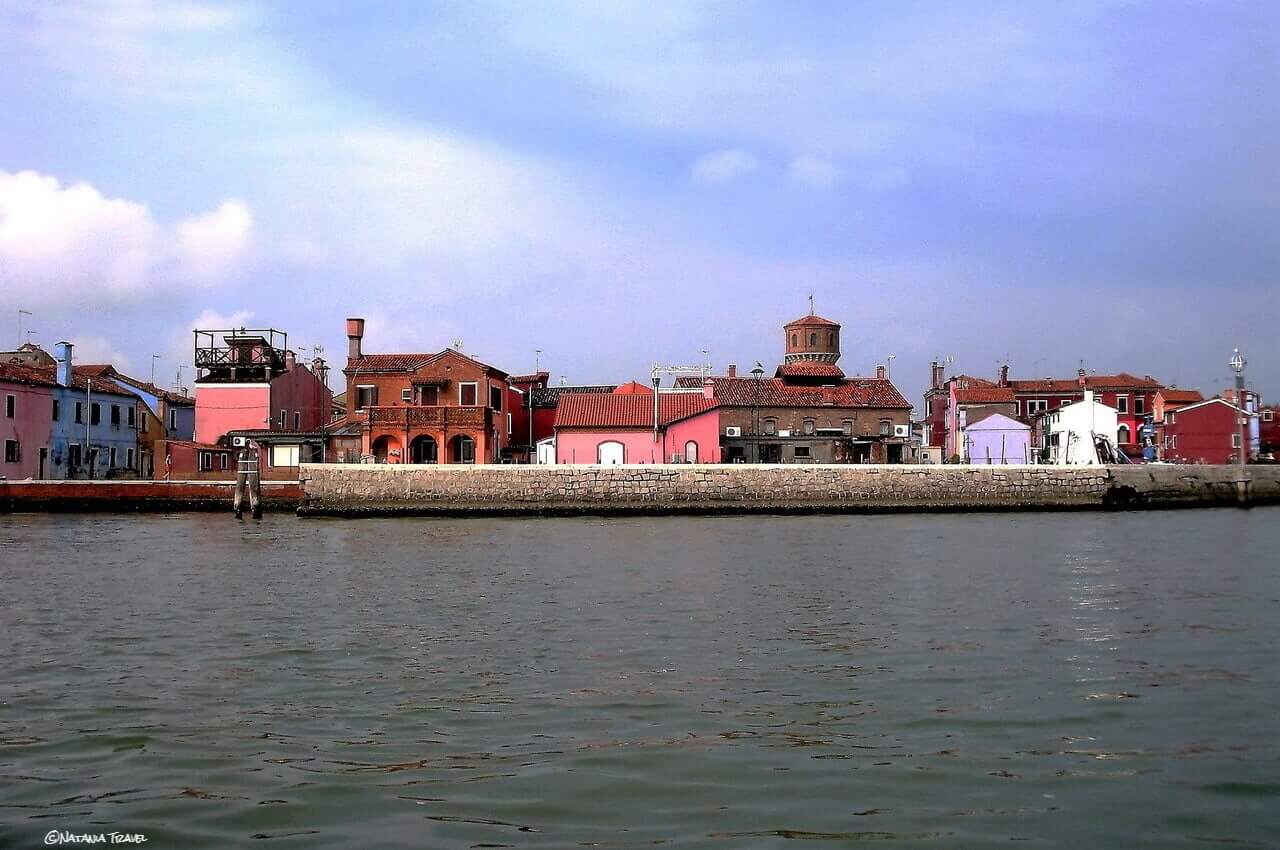 According to the legend, the island’s fishermen were the first who painted their houses in bright colours. The reason was simple: it helped them to recognize their houses when they were coming back from fishing, especially through the fog! 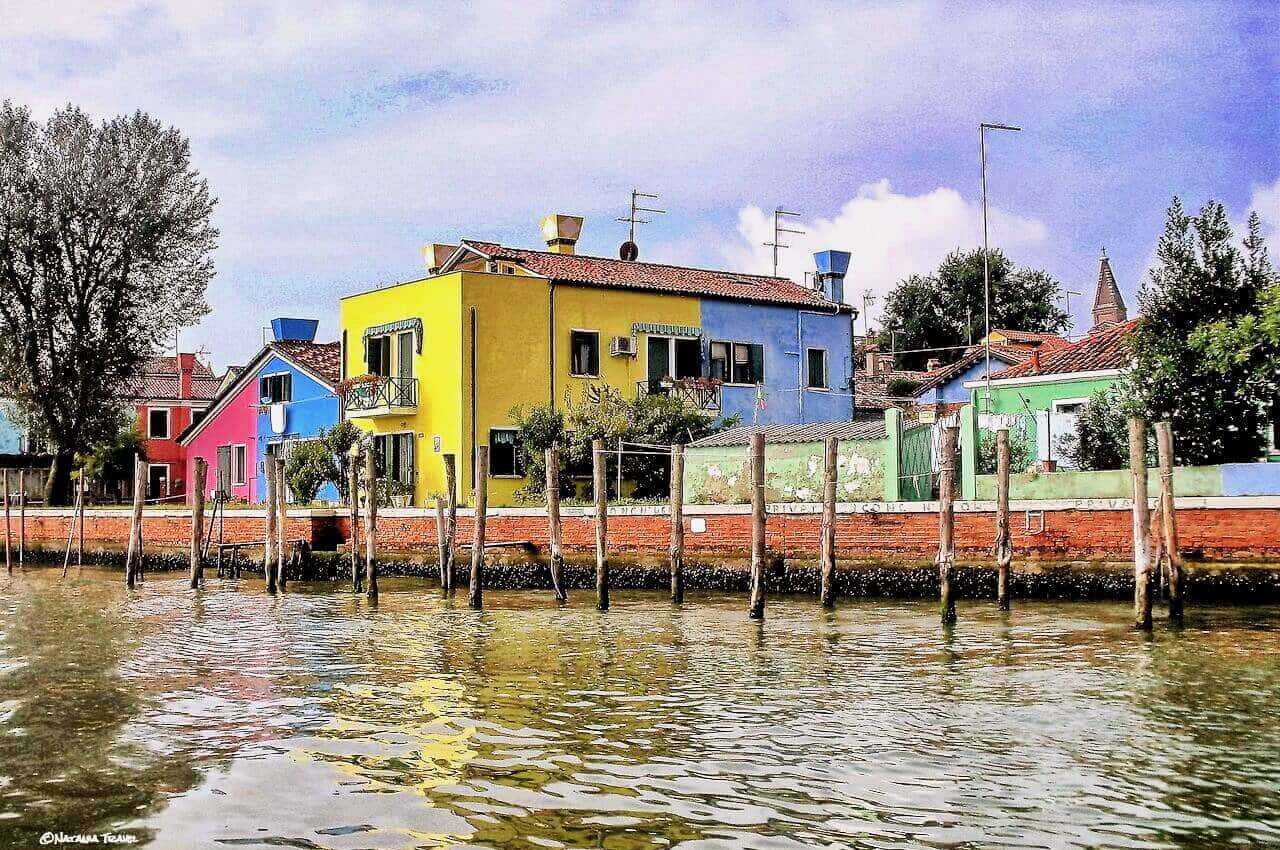 What to see in Burano Island 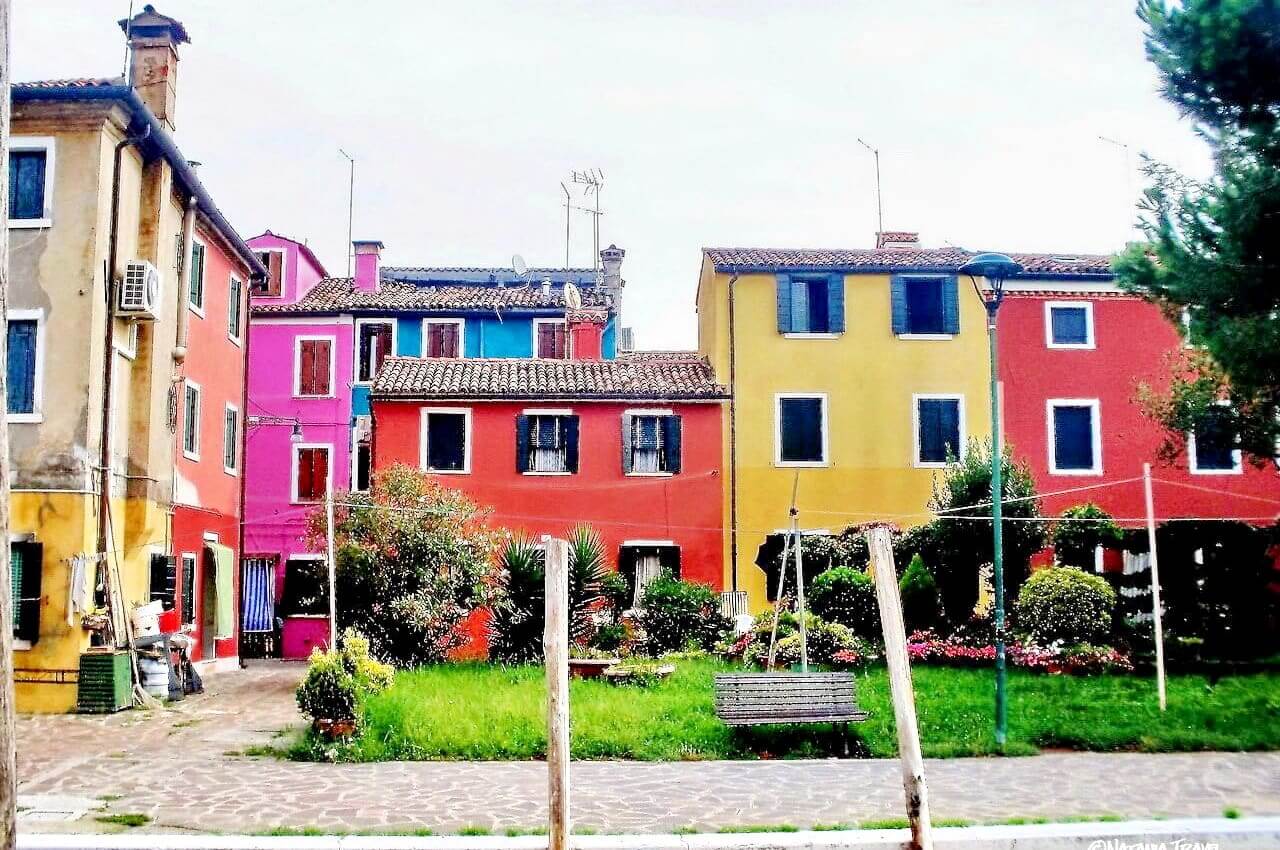 The centre of the island is the main square, Piazza Galuppi. Here you can find a church, the leaning tower, and the Lace Museum. And of course, the tiny houses are everywhere, all painted in different colours!

The Church of St. Martin Bishop and the leaning tower

The Church of St. Martin Bishop (Chiesa di San Martino) was built in the 16th century.
In this Roman-Catholic church was the painting “Crucifixion” by Giovanni Battista Tiepolo, the great Italian painter of the 18th century. This painting and some other works have been transferred to the Santa Barbara Oratory located near the church.

Behind the church, you can see the leaning tower.
Well, it is not like the famous tower in Pisa, but because of subsidence, it is inclined 1.83 meters in relation to its axis. The tower was built between 1703 and 1714 and is attributed to the famous Italian architect Andrea Tirali. It has a square shape and the elements of the Renaissance and neoclassical architecture. The bell tower is 53 meters high and you can see it from every part of the island.

In the middle of the square, there is a statue, dedicated to Baldassare Galuppi. He was a composer, born in Burano in 1706. According to The Musical Times (an academic journal of classical music), Galuppi, with his 109 operas, was the sixth most prolific opera composer. The main square on the island is named in his honour. 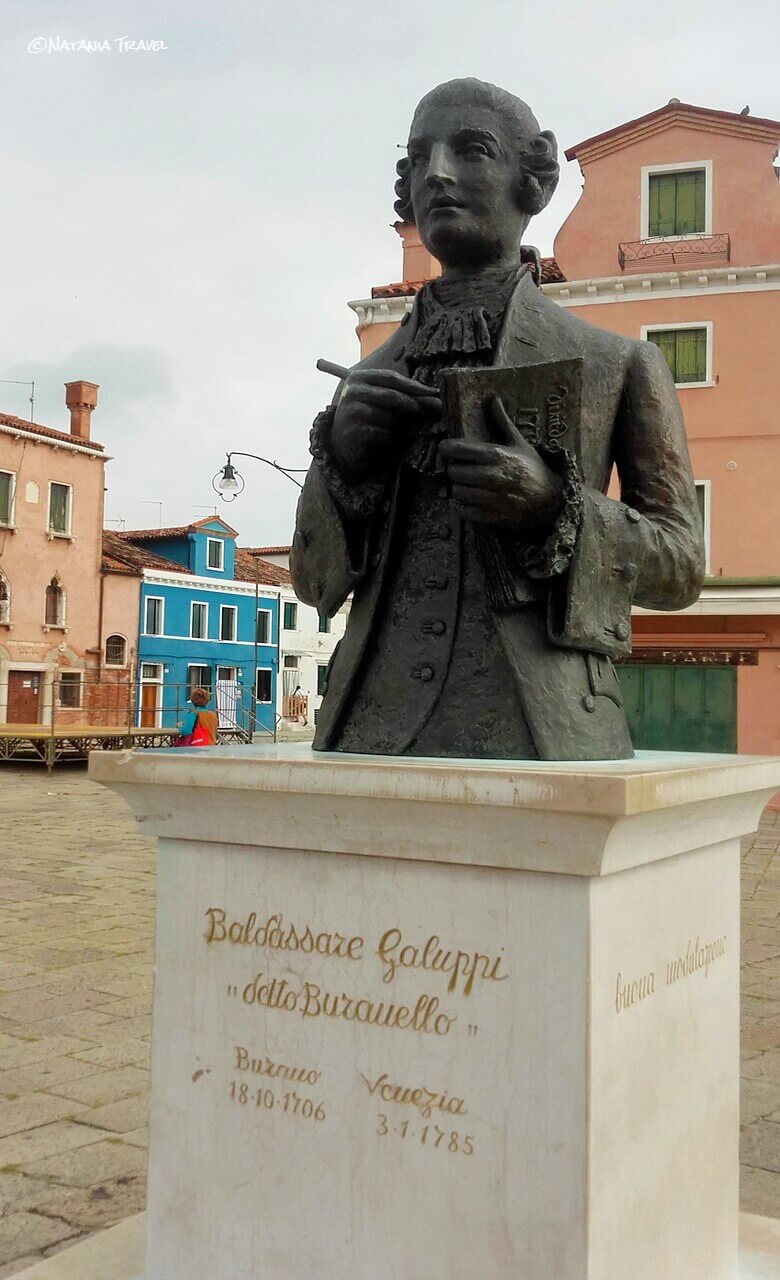 On Gallupi square there is an original well from 1588, still flowing with fresh water.
Also, there is an ancient step in Istrian stone from the 18th century on the yard from which once the flag “Gonfalone of St. Mark” was flying, representing the two protecting Saints of the Island, St. Martin, and St. Albano.

Around the Galuppi square, there are fish restaurants, bars, few bakeries, and shops. 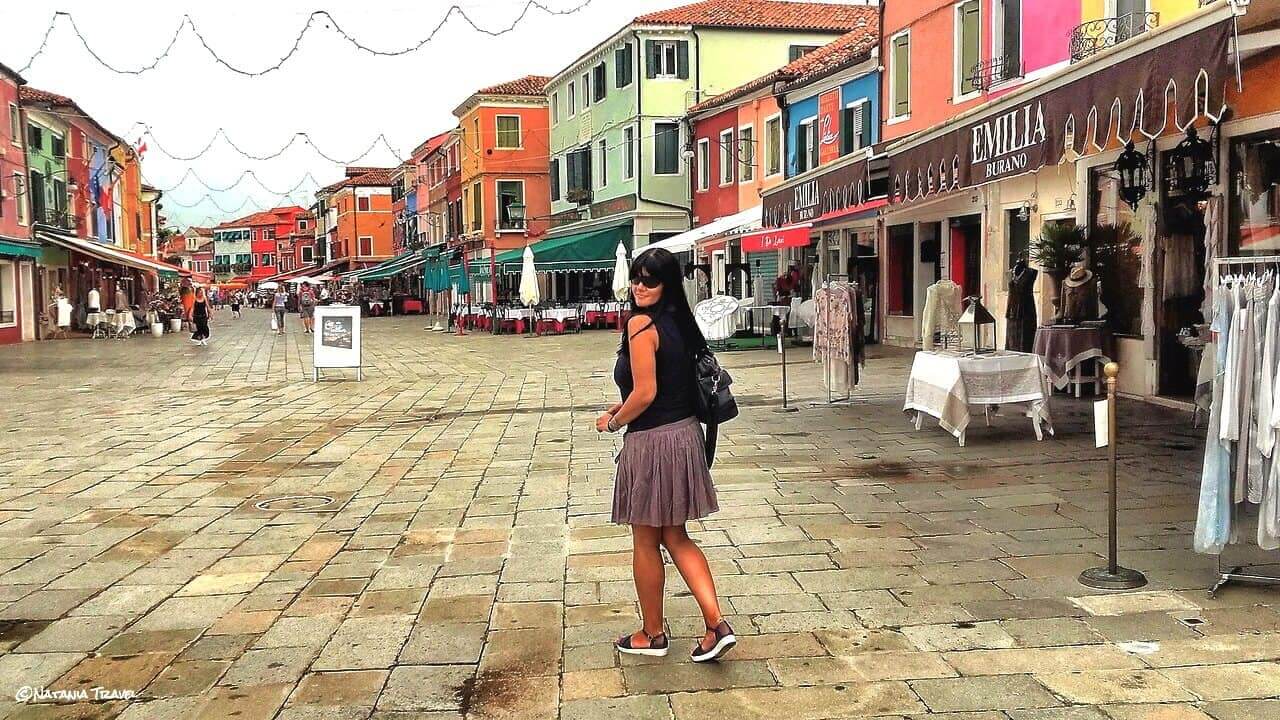 .
From the Piazza, take a walk to the main street Calle Galuppi.
It is full of shops and houses painted in different colours. 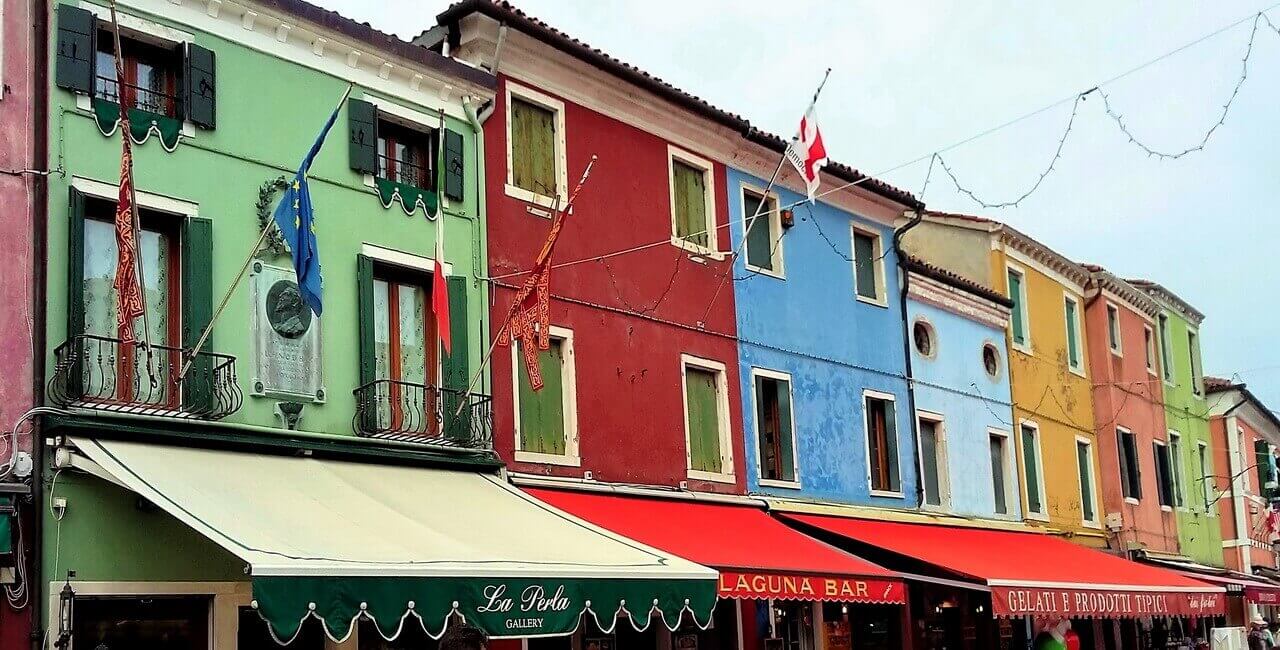 The Lace Museum is located in the former seat of the famous Burano Lace School, in a gothic palace of Podestà of Torcello.

In 1978 the public administration of Venice (the Town Council, Provincial Authorities, Chamber of Commerce, and Tourist Boards) joined together with Andriana Marcello Foundation in a “Consortium for Burano Lace”. Their mission was to revive and preserve the Burano lace tradition.

You can visit the Lace Museum (Museo del Merletto), from 10 am to 6 pm (5 pm in winter). It is closed Monday, and the entrance fee is 5 € per adult. The museum is small, but you can learn more about lace history from its origins to the present day. Here you can see the rare and precious lace pieces and clothes as well.

So, Lace Merletto, pizza, and trina are synonyms for lace. Without any textile support, by combining stitch upon stitch with a needle using the special techniques, the Burano lace is still a masterpiece in Italian craft tradition. 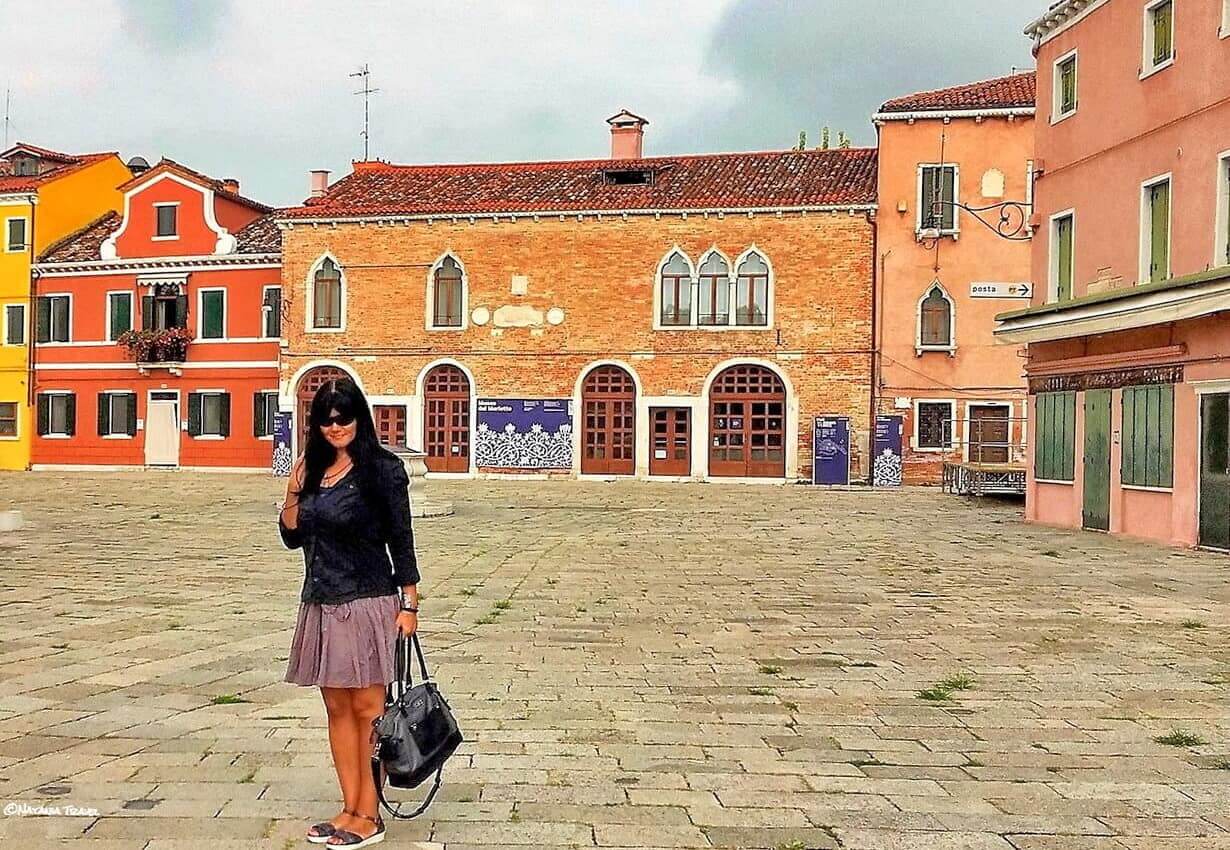 The story about the Burano Lace

Since the 15th century, the women from Burano engaged in making beautiful, hand lace pieces. In the 16th century, lace was made with needles and soon the lace was exported across Europe. But the trade began to decline in the 18th century and the industry did not revive until 1872 when a school of lace-making was opened.

And the lace-making on the island boomed again, for nearly 100 years, imitating 17th-century Venetian needle laces and developing a typical Burano form worked in a slightly brown cotton thread. But in 1970 the school was forced to close by the competition of cheaper imported laces from Asia. 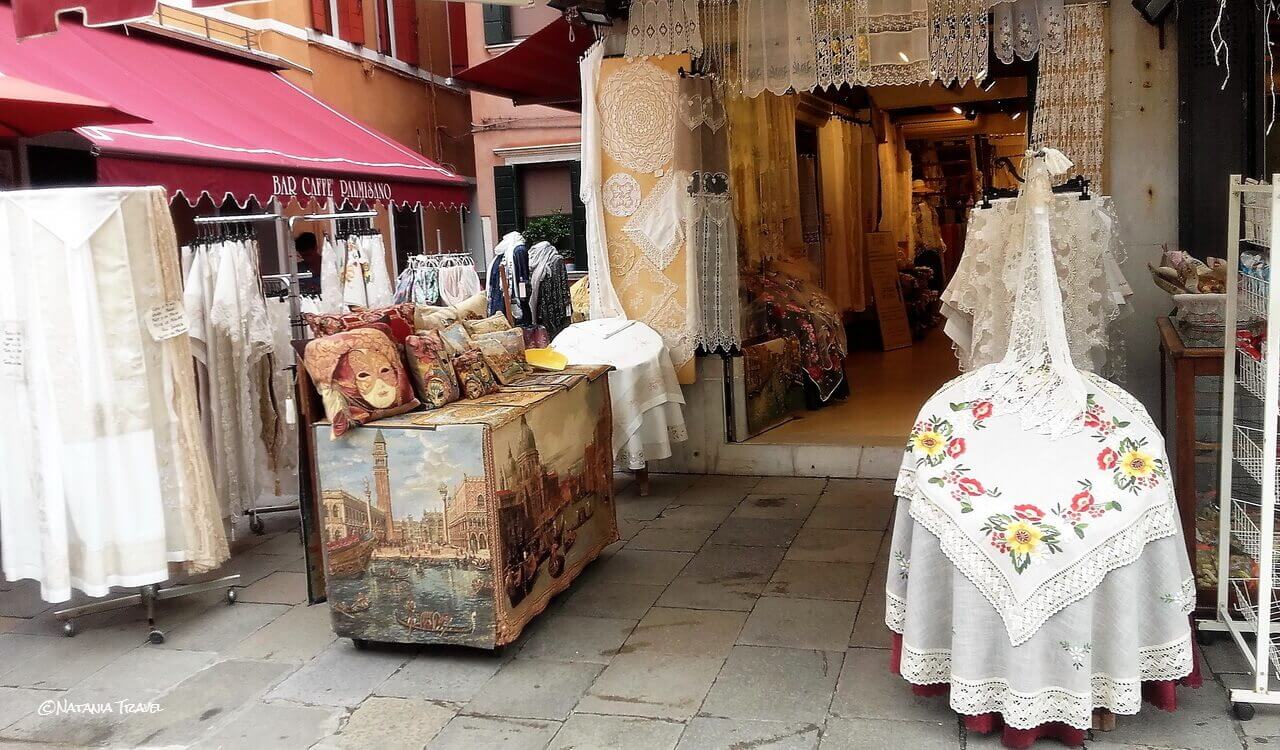 The shop with Burano lace

Well, lace-making requires a lot of time and patience. In the past, the women used the threads of superfine linen, but also of silk, gold and silver, and since the 20th century, cotton in particular. The main technique typologies are needle and bobbins.

Usually, for lace creation, more than five steps are necessary, which still involve five persons. Every lace-maker is assigned to the step which she is good at (even if she knows all the stitches). So every piece of lace made this way is expensive. Almost every shop on the island sells lace products. But, if you find a lace at a much lower price, you have to know that it is not the original lace.

The legend about the lace

Of course, there is one romantic tale about the Burano lace…

According to the legend, the sirens tried to seduce an engaged fisherman with their sweet song. But he declined the sirens because of his beloved girlfriend, who was waiting for him on the island. As a sign of respect, the sirens created foam in the water and transformed it into a wedding veil for his fiancée. Envious of the veil, the women in the village tried to copy it with delicate needlework. They made the beautiful art of lace for the wedding veils and dresses.

And this is the story of how the famous Burano lace was made. 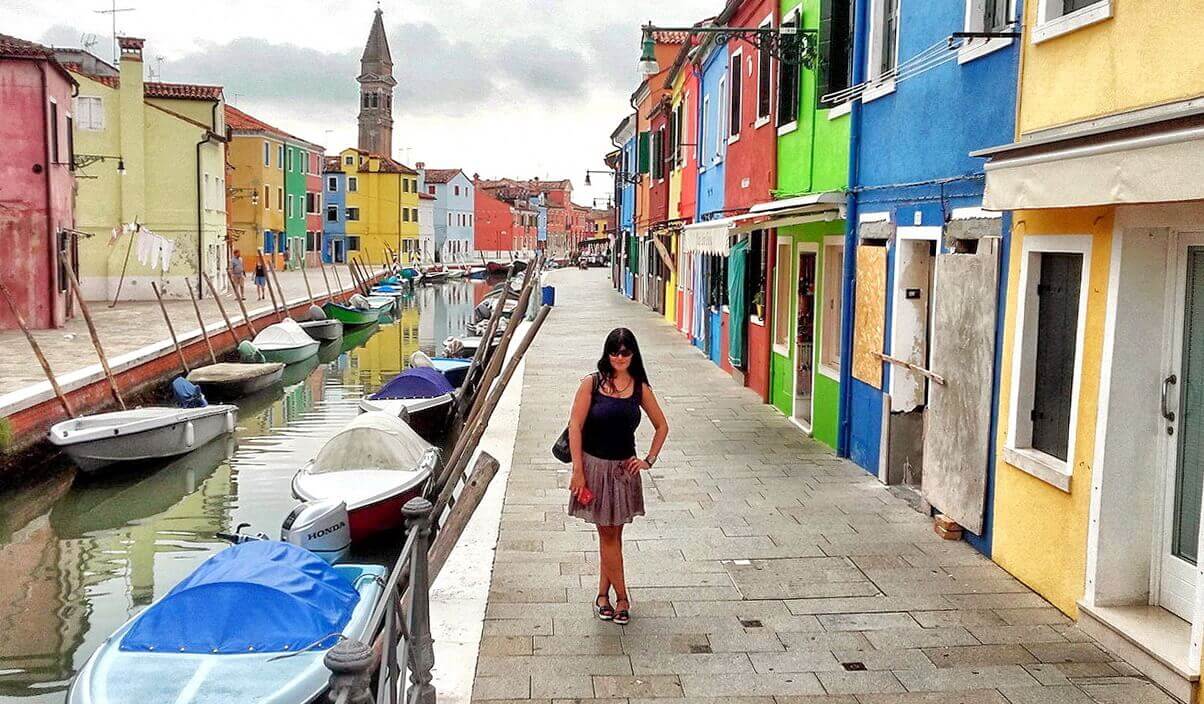 The canal and houses in Burano

So it is a very pleasant feeling walking through the narrow streets of Burano. 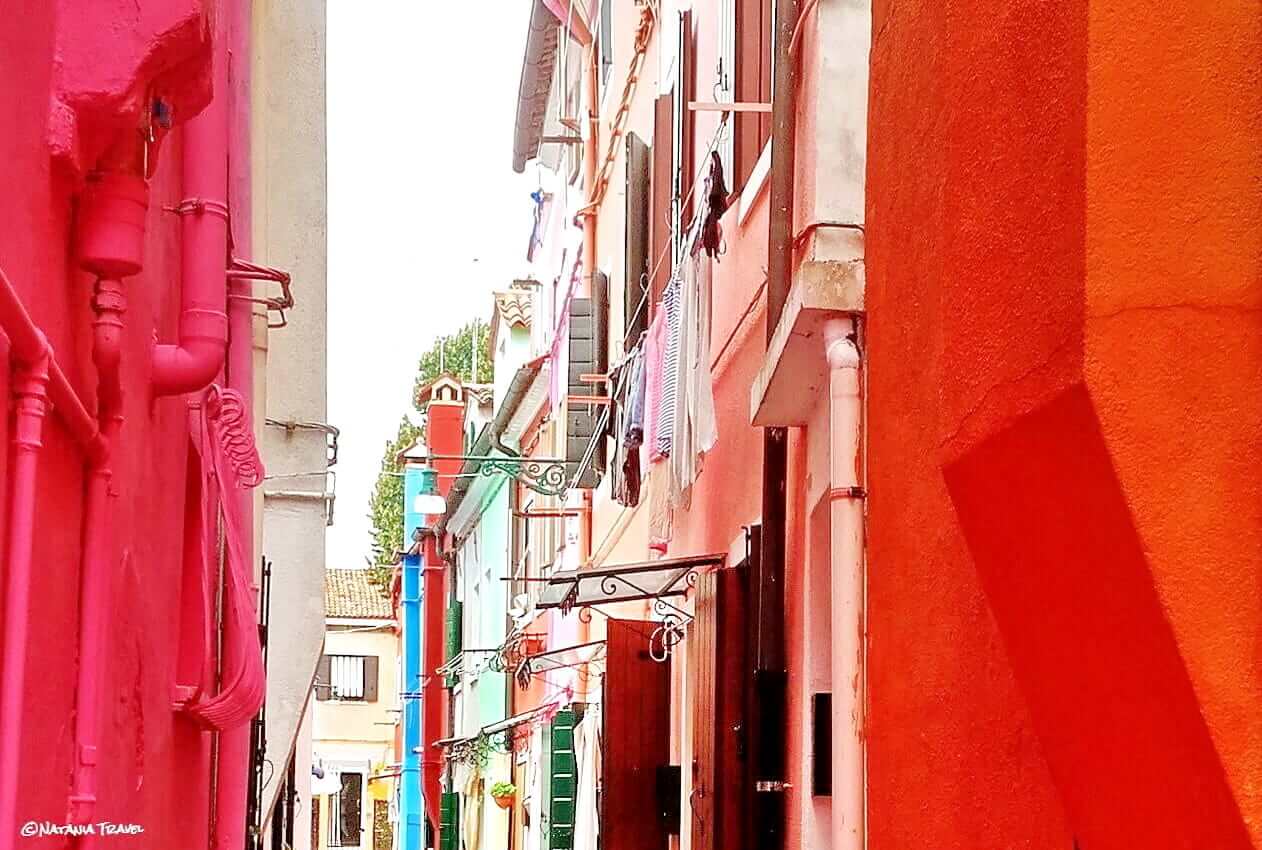 The narrow street in Burano

In lines, you can see the houses painted in different shades of red, yellow, blue, green, orange, violet colour. 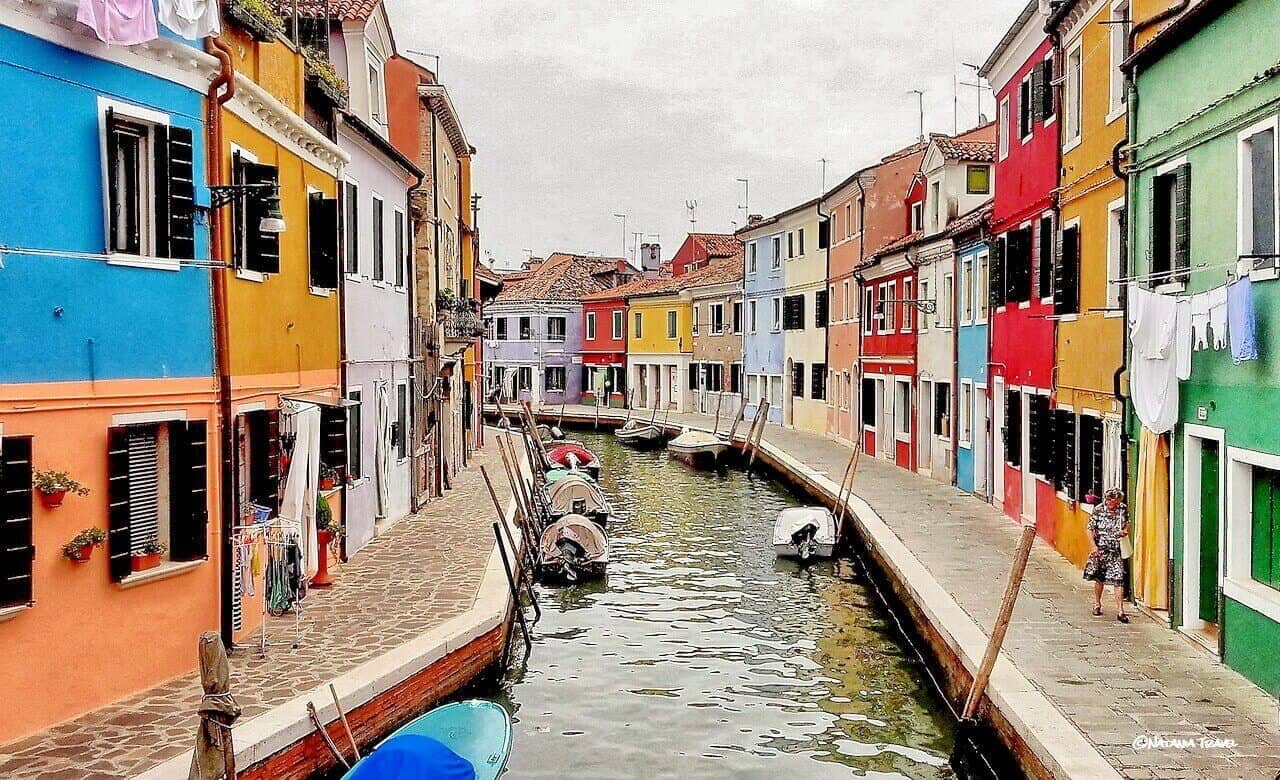 And the view is amazing.
The houses are reflecting on the canal water, where small boats are waiting to sail out. 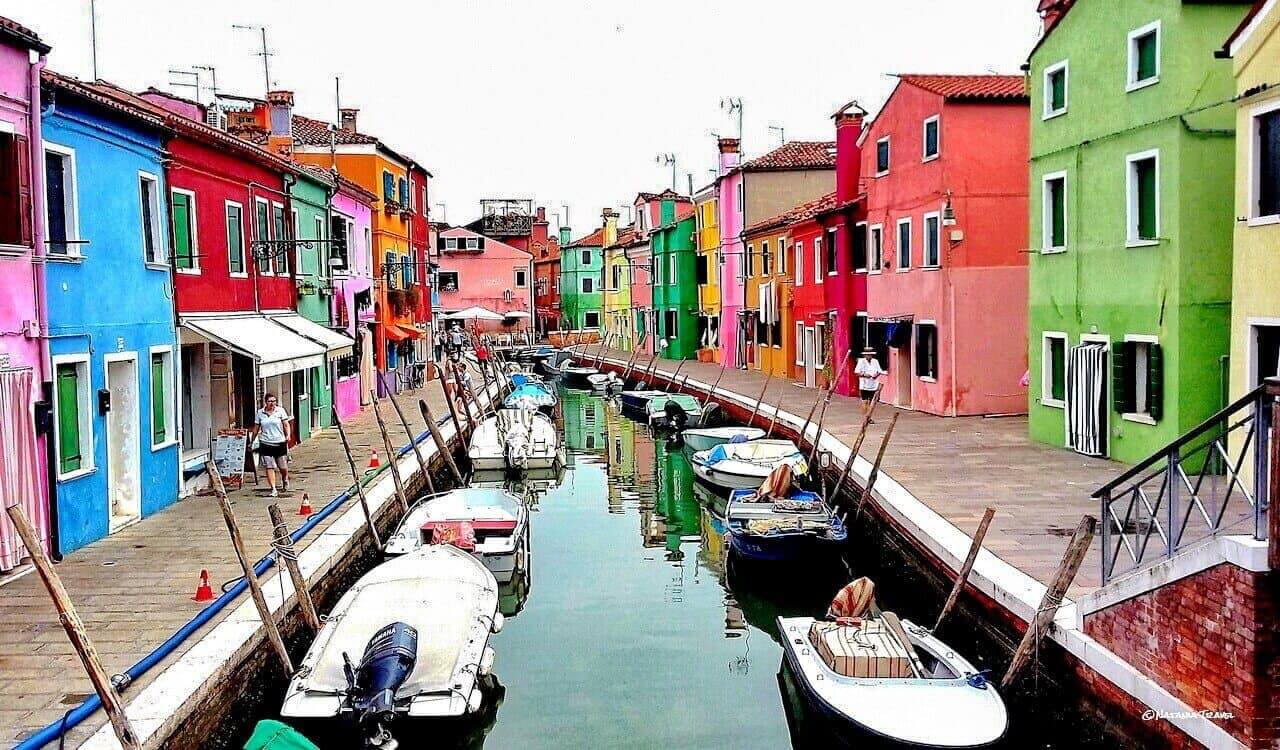 Almost everywhere you can see flowers.
The laundry is hanging on the windows and between the houses as well. 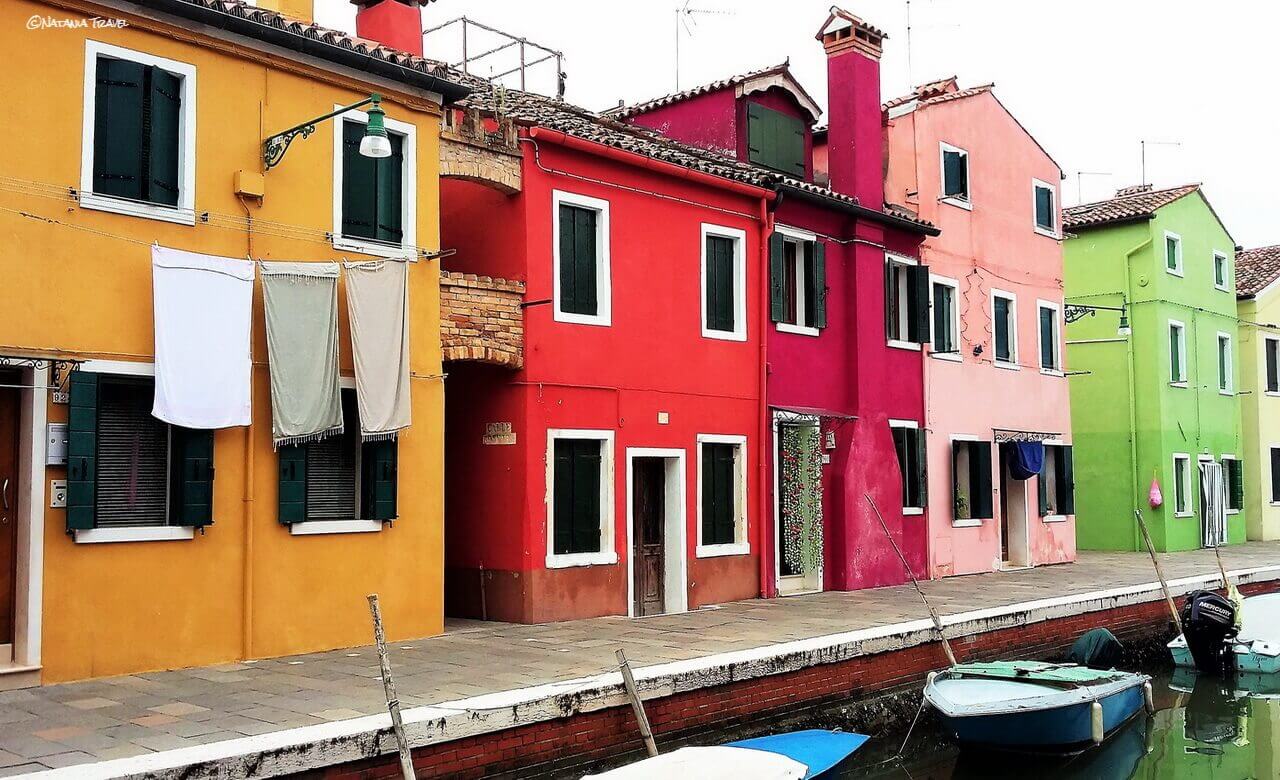 Burano island and the colourful houses

One of the most photographed places in Burano is the wooden bridge, known as Three bridges (Tre Ponti). 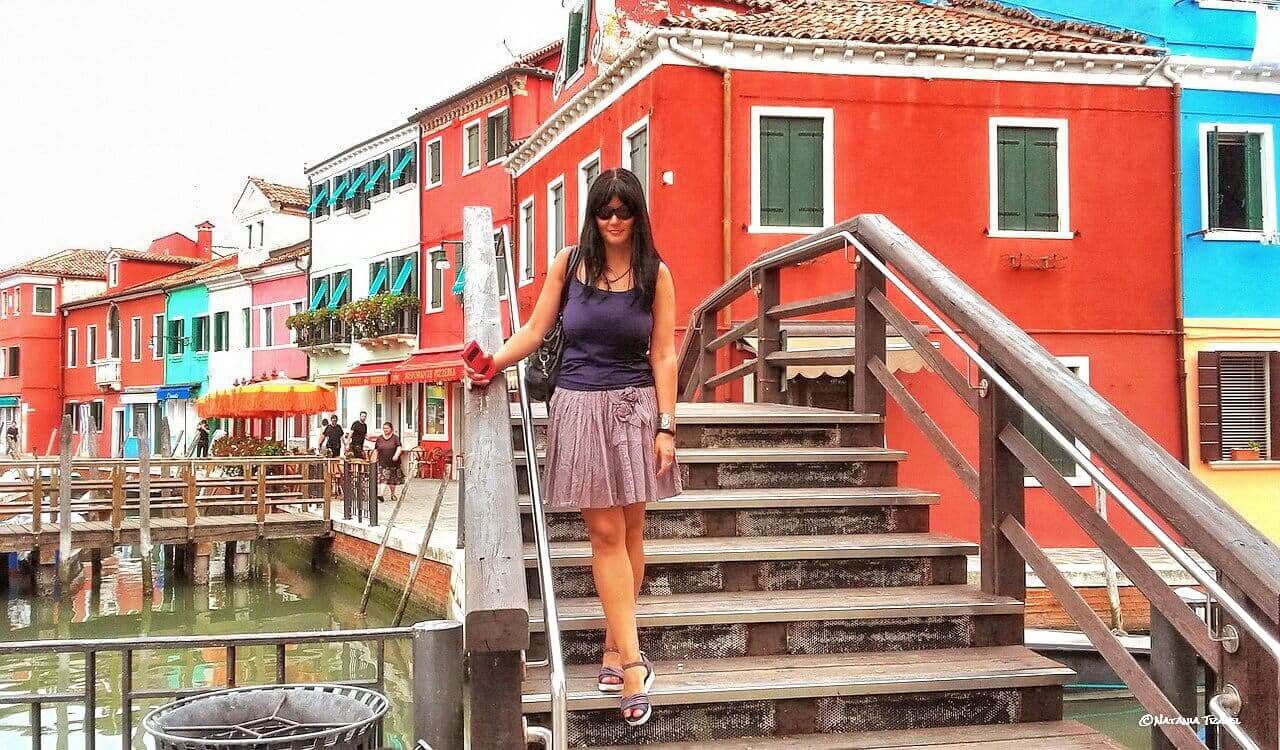 Actually, this bridge connects three canals and three colourful streets on the island. 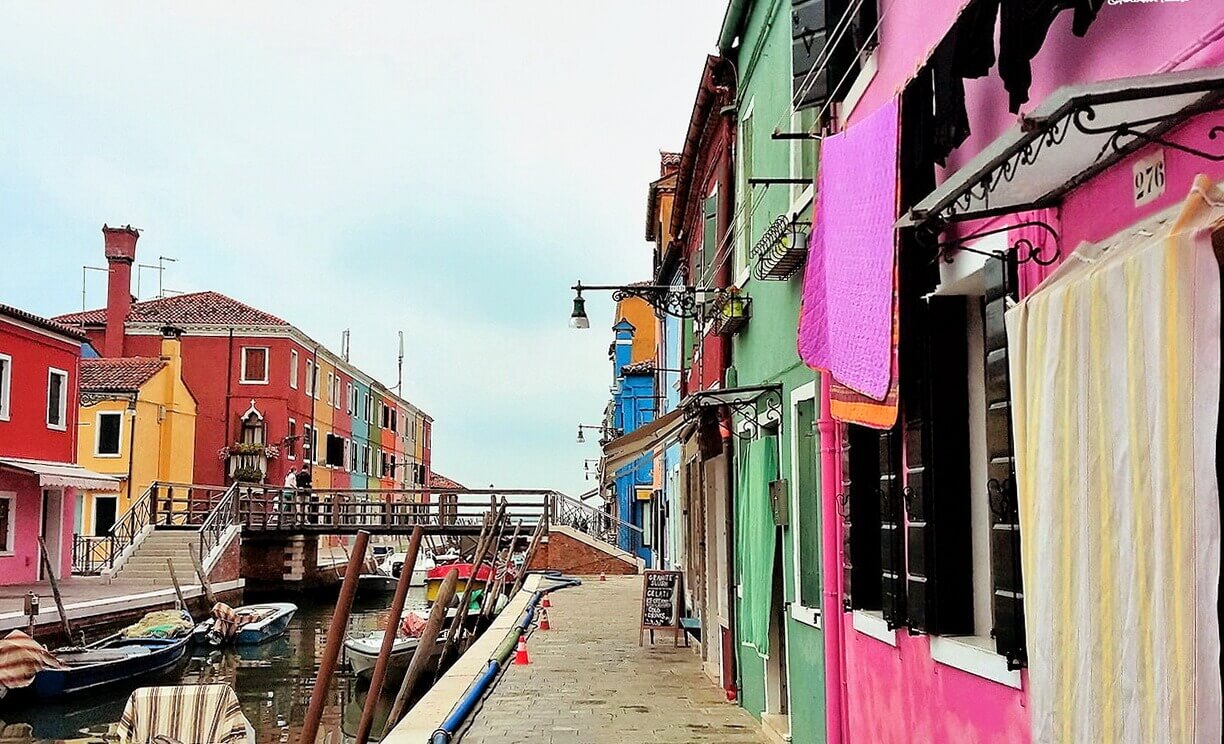 And when you get tired of walking, take a break. Have lunch in small fish restaurants. 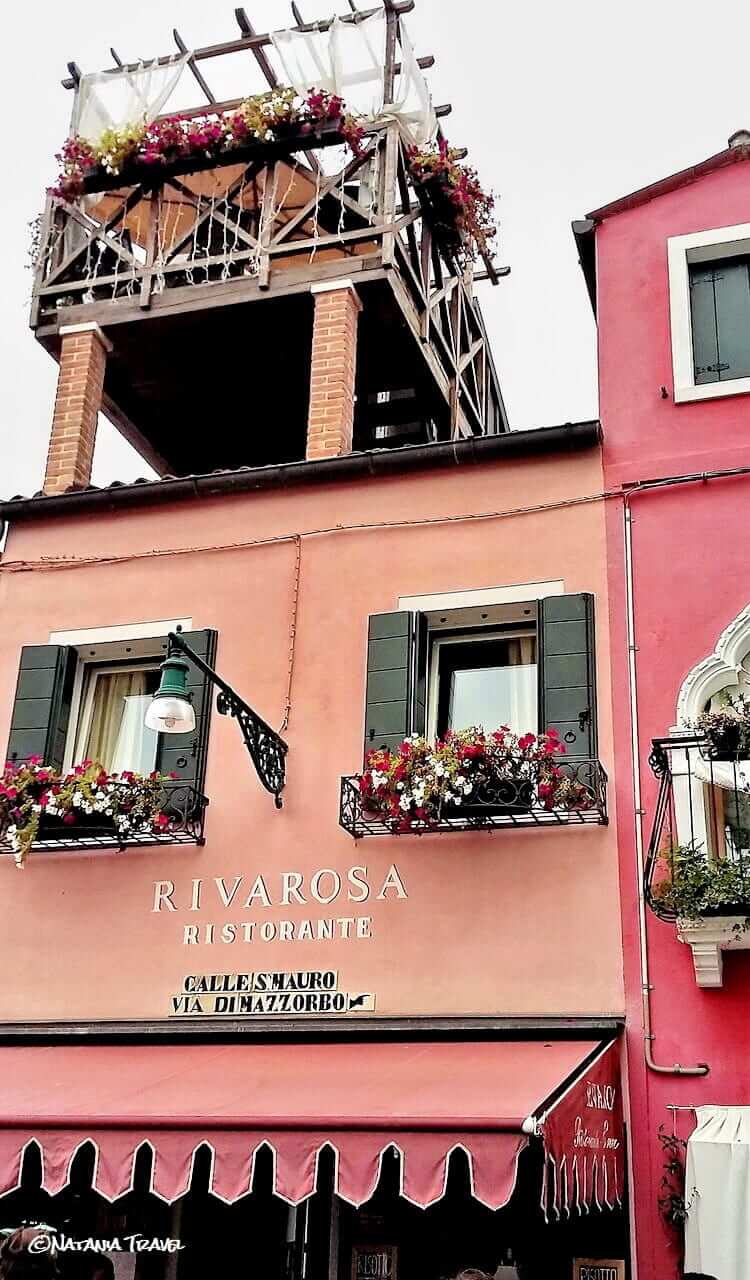 Drink cappuccino in a bar. Taste typical biscuit Bussola, in pasticceria (Italian bakery), made on the island. It is a donut-shaped cake, also known as buranelli. Some of these cookies have an “S” shape, and they are called Burano’s essi. 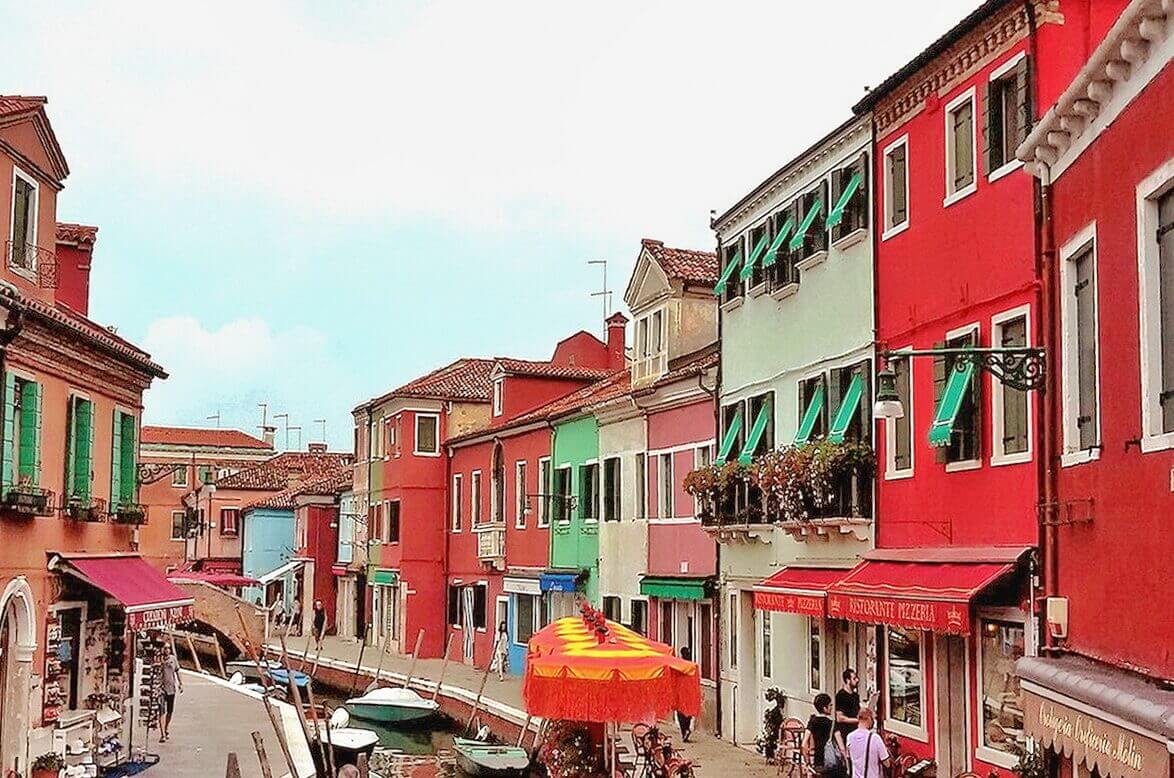 How to get to Burano

The easiest way to Burano is from Venice. The distance is about 7 kilometres (4 miles) and it is a 40-minute trip by a Venetian water bus, vaporetto. The LN line Vaporetti is available in Venice from Tre Ponti, Punto Sabbioni, and Fondamente Nuove.

Also, there are guided tours from Venice, like a half-day excursion. The boat-trip tour includes a visit to Burano, Murano, and Torcello, and the starting point is close to St Mark’s Square. The price is € 20, and more information about the tour you can see here.

There is a possibility to take a hop on hop off tour from Venice,  if you want to be more flexible and visit these islands, as well. The ticket price is € 20 per adult and the validity is 24 hours. It starts from the moment you get on board and finishes the following day at the same time. 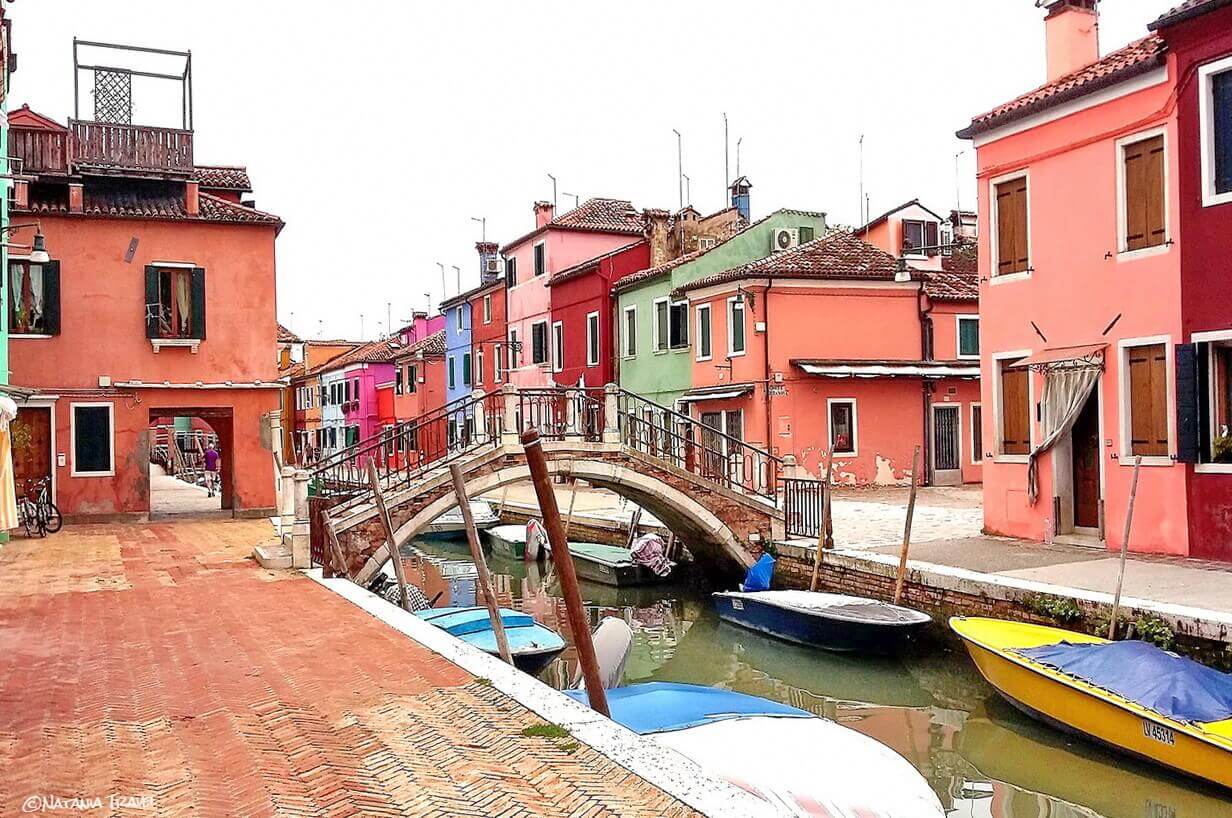 In a word, this small island will impress you immediately when you step on it.

Tiny houses, little crafts shops, and a quiet atmosphere are enough to relax and enjoy the perfect harmony of the colours and the sea. 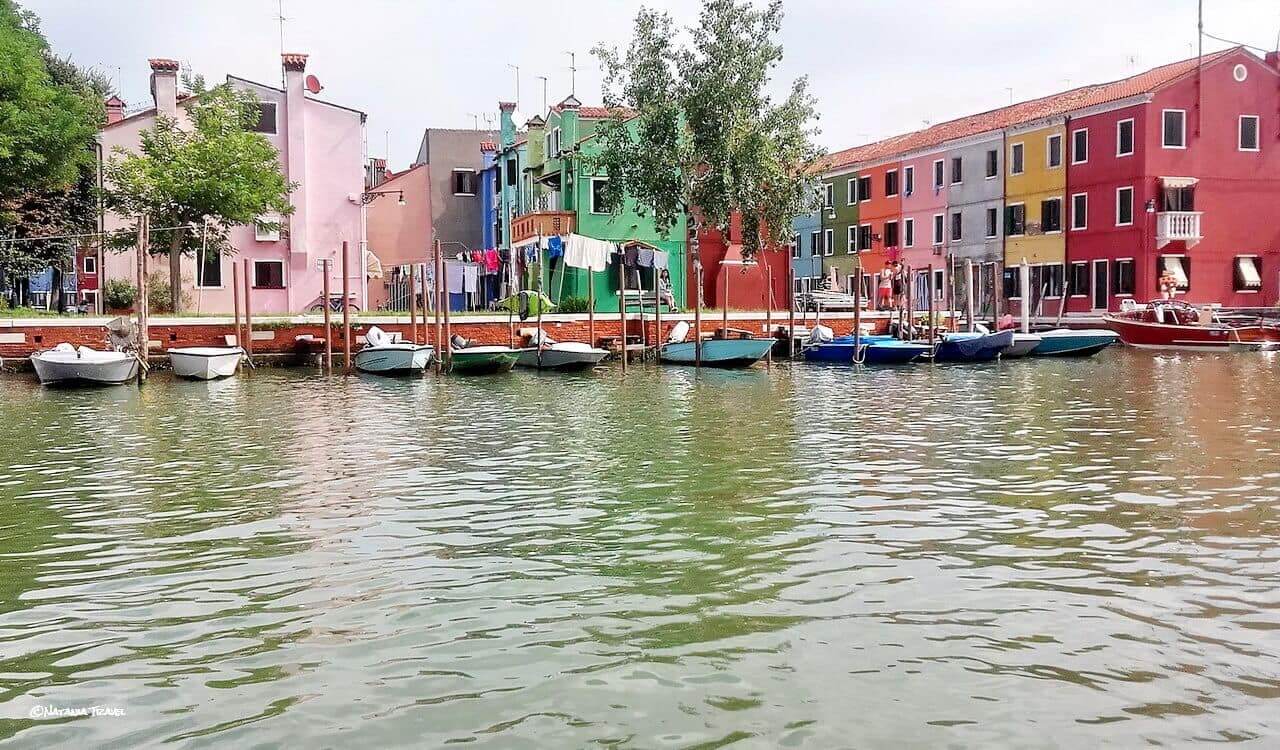 The residential part of Burano